Born on 19 Cheshvan 5600 (27 October 1839) in Karolin, Belarus, Rav Yitzchak Yaakov Reines studied at Volozhin Yeshiva under the Netziv. Reines, not unlike the famous religious Zionists who preceded him, received a traditional yeshiva education. His ability to immediately grasp and memorize information was renowned among the religious communities while he was still very young. By the time he was eighteen, he had been ordained by some of the most famous and well-respected rabbis of the time. After ordination in 1867, he was appointed Rabbi of Shavkyana, Lithunia, where he spent less than two years. He then moved to Sventsyany (a district of Vilna) to serve as Rabbi and Av Beit Din (head of Jewish court).

It was in Sventsyany that Rabbi Reines set up a revolutionary yeshiva in which secular subjects were taught along with normal yeshiva curriculum. He desired to narrow the gap between the students in yeshiva and the enlightened Jews, so that a yeshiva graduate would be able to understand and deal with the world about him. However, among the religious and more established members of the community, there was great opposition because they viewed the inclusion of secular subjects as a desecration of the Holy, and as a result the yeshiva was forced to close after a short time. Yet, Reines never abandoned the idea and was destined to see its fruition many years later.

In 1883 he went to Lida where he served as Rabbi and Av Bet Din and by 1905 his established reputation gave him the ability to set up without opposition the yeshiva that he wanted under the name of Torah and Madah (‘Torah and Science’). During its ten year existence the yeshiva enjoyed a well earned reputation and hundreds of students graduated from it.

Rabbi Reines died on 10 Elul 5675 (29 August 1915) and his name has been memorialized in many areas in Eretz Yisrael. Neve Yaakov, a suburb of Jerusalem established in 1924, rebuilt after the Six Day War of 1967, is named after him. The first moshav of HaPoel HaMizrachi, Sede Yaakov, established in 1923, is also named in his honor, as are many streets in the various cities of Israel.

Activities in Regard to Eretz Yisrael

During his youth, Reines began to take an interest in Eretz Yisrael and when he heard of Rabbi Kalischer and his ideas, Reines agreed with them. At that time he wrote to Kalischer, outlining in detail a plan which he had developed for reclaiming and rebuilding the land. In 1887, Reines met with Rabbi Mohilver and presented to him a detailed plan for activities to be instituted by the religious members of the Hibbat Zion movement. Reines hoped to establish a system of schools in Eretz Israelwhich would turn the land into the center of Torah learning in the Jewish world. However Mohilever did not accept the plan as he thought it was not yet a practical possibility.

Two years after the establishment of the World Zionist Organization, Reines began to actively work on its behalf. Rav Reines was one of the first rabbis to answer Herzl’s call to become part of the Zionist movement, and beginning with the Third Zionist Congress of 1899, he attended almost all meetings and congresses of the world body. In 1901, at the Fifth Zionist Congress, when the National Federation (or Democratic Federation) attempted to have all education placed under the auspices of the World Zionist Organization he fought strongly against the idea.

Under his guidance and influence, the First Congress of the Religious Zionists was called in Vilna in 1902. It was here that the name Mizrachi, a conglomeration of the words Mercaz Ruchani (‘Spiritual Center’) was chosen. Indeed, the Mizrachi party envisioned itself as the spiritual center of the Zionist organization and desired to make Eretz Israel the spiritual center of Judaism. They borrowed the name Mizrachi in order to show the relationship between the new political party and the Mizrachi segment of Chibbat Zion, which Rabbi Mohilever established in 1893. Their purpose was twofold: On the one hand, they desired to heighten the awareness among religious Jews towards the possibility of aliya and on the other hand, they desired to influence the non-religious Zionists by creating an atmosphere of tolerance and equality between the two factions.

During the first year of Mizrachi, 210 groups were established in Russia, Polandand Lithuania, aside from the Mizrachi groups in other countries of the Diaspora. In the general gathering of Zionists in Minskin 1902, 160 members of the newly formed Mizrachi party attended the congress. At the Fifth Zionist Congress, Reines fought strongly to keep the Zionist movement from splitting and, because of this, voted for the Uganda Resolution. After the Tenth Zionist Congress of 1911, when education fell under the wing of the W.Z.O., the Mizrachi movement split when many of its members demanded that the party leave the auspices of the W.Z.O. However, through the personal intervention and efforts of Rabbi Reines, the Mizrachi party remained within the organization and only the Frankfurtbranch broke away. Rabbi Reines remained head of Mizrachi until his death.

Rabbi Reines’ importance rests not only with the fact that he established Mizrachi – the Religious Zionist Movement – but also in that many of his ideas which were written in various publications, became the cornerstone to the Mizrachi movement and have become realities. 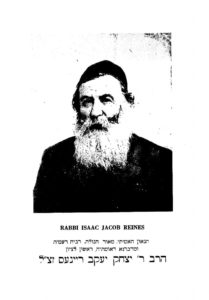 The Religion of Our People

“One of the basic foundations of our faith is the belief in the return of Israelto its land, for it is not possible to conceive that our nation is meant to be scattered and separated forever among the other nations in the world without its own land. Therefore ‘nationalism’ is the first and basic part of the faith of Israel…For a unique people with its unique religion can only be fulfilled at the time when it has its own land or, at the very least, a hope that it can return to its land.”

Each and every Jew should consult his heart and recall all that has passed and occurred to our fathers in this land and how they sacrificed their lives and their blood was spilled like water upon it; can such things not light his soul like burning coals and his heart with fire?

One should always desire to spread his tent in the Holy Land and through this he will see Eden and gain satisfaction to no end. However, the individual whose heart is far removed from such desires – this is a sign that his relationship to the Land has been severed and all love for the land no longer exists within the heart.”

The Commandment to Settle Eretz Yisrael

‘The commandment of settling Eretz Yisrael, which is one of the commandments of God which cannot be measured in value, has been the subject of hundreds of statements made by our sages in regard to the elevated holiness of the Land and it is as well a commandment in which our intellectual and emotional beings find fulfillment. Furthermore, in regard to the intellect and the emotion, there is probably no other commandment of such worth; for it is commanded in regard to the general population for the good of the individual, and to benefit and improve the condition of the masses as it is beneficial for each individual. For this reason, the commandment to settle in the land is far greater than all the other commandments as it affects all actions between man and his fellow man – to improve the personal lives of each individual.

In regard to the commandment of settling the land, it emanates from the desire to improve upon the condition of the entire nation and the rebuilding of a complete and total nation. “

Better the Land than Exile

“It is written: ‘…And lie down in the wilderness, sela’ (Psalms 55:8). Upon this verse our Rabbis comment: “It is better to sleep in the deserts of Eretz Israel than in the palaces of the Diaspora.” (Genesis Rabbah 39:8) Such a concept should exist deep within the heart of every Jew and all the pleasures of this world as well as the residences that one owns in the Diaspora should not be treasured even during a time of peace and contentment. For the peace of Israel in the exile is not one which contains any measure of permanence for every hour we may be forced to leave and wander. Even at a time when the sky is clear and the winds of the world are at their calmest – even at such a moment – one must remember that the situation can change, the sun will be darkened and great strong winds of change can come unexpectedly…”

Settling the Land – a Life Sign for the Nation

“It is incumbent upon all Jews to actively show their love for the Holy Landand to work to settle the Holy Land, for this is one of the wondrous signs which bears testimony to the love which is in our hearts and which we express for the Holy Land. In merit of this pure and sanctified love we may hope to see the redemption. But all the time that we dont work towards building the Yishuv, it is a sign that we are lacking the very fundamentals of life. For just as the beating of the heart is a sure sign of life and, once it stops the blood turns cold and activity ceases, so is the work in regard to settling Eretz Israel, the heartbeat of the body of the Jewish nation, and the heart is awake for Zion and filled with love for the land of our forefathers. The lack of such activity and work for Eretz Israelcauses the blood to turn cold and the heartbeat to cease and all powers of spiritual longing to die.”

Zionism – The Finger of God

“All that others see as detrimental (to the Zionist cause), I view as a positive influence; Others see in the (many) Zionist parties division of the hearts and I see in it a unification of powers. If one party were to work for the coming redemption this would not be surprising. But the fact that many different factions, each retaining its own specific view and ideology can unite under one general flag – the national flag- this can only be seen as ‘the finger of God’, a phenomena that is not normal. The very fact that there are so many different political factions within the Zionist movement is in itself the best witness that this movement is resultant from the entire people of Israel, for they (the political factions) unify the various potentials which exist (within our nation).”

Source: Speech to the Zionist Congress

Neve Yaakov, in northern Jerusalem, was established as a Jewish neighborhood in 1924 and named after Rabbi Yaakov Reines, who died in 1915. In an Arab offensive during Israel’s War of Independence, the Jordanian Arab Legion occupied Neve Yaakov, expelling the Jewish residents. The area remained in Arab hands only between 1948 and 1967. Then, during the Six Day War, Israelre-captured Neve Yaakov and re-settled it.

Neve Yaakov boats two major areas that are dominated by the orthodox population. The older section lies on top of the Emek (Valley), and is known as the Kamenitz, which consists mainly of two and three bedroom apartments. For larger families, the Emek (now known as Neve Yaakov Mizrach), was developed and built roughly ten years ago.

A large English speaking population dominates the orthodox community. Consequently, there are many options for Shiurim and Shuls, The Neve Yaakov Orthodox women have formed a committee to assist individuals or families with such problems s dealing with illness and Shabbat preparation. There are also the traditional Gemilut Hasadim organizations that assist in times of need.

A relative who won the Nobel prize for physics: https://www.nobelprize.org/nobel_prizes/physics/laureates/1995/reines-facts.html