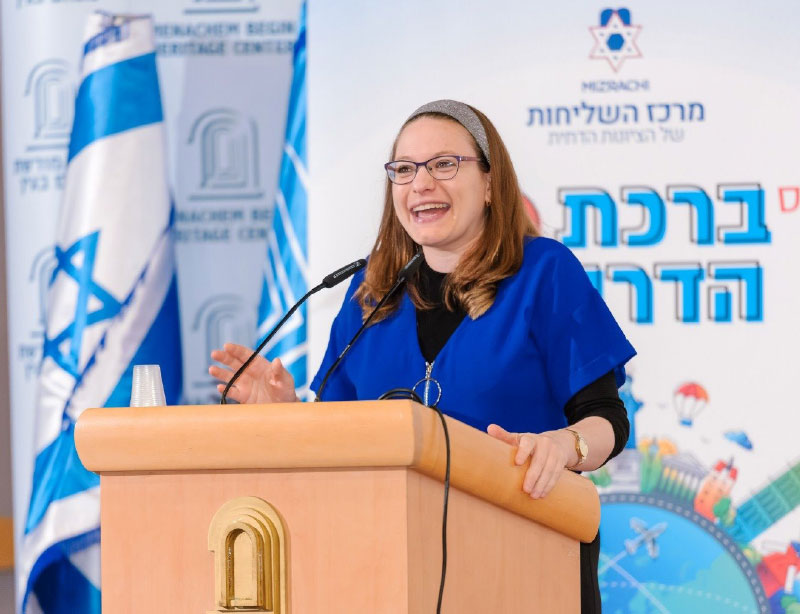 In September 2019, Yedidya and Sivan Rahav-Meir moved to America to serve as shlichim on behalf of World Mizrachi. Sivan’s schedule included regular shiurim at Yeshiva University’s Stern College as well as scholar-in-residence Shabbatot across the country. While working with the American Jewish community, Sivan and Yedidya also reached out to the ever growing community of Israelis living in America who have made ‘yerida’, or in today’s trendy Hebrew, ‘relokayshen’. Sivan spoke with a remarkable pair of individuals to learn about their work strengthening Jewish identity among Israeli-Americans.

While in Hollywood, Florida, I met with Dr. Neta Peleg-Oren, a secular psychotherapist, and Rabbi Yehuda Kornfeld, a Charedi rabbi and educator. Together, they lead a seminar called “It Won’t Happen To Me”, which is also the title of their recently published book. These are the words every Israeli who moves to America says when asked if they are worried their children will intermarry. But Dr. Neta and Rav Yehuda are worried. There are close to half a million Israelis living in America today, and a significant majority of their children are intermarrying.

“I grew up in Kibbutz Yagur, my parents are from Kiryat Tivon, I am the classic secular Israeli,” says Neta. “I never thought about the question of intermarrying until we came to America, but I have three unmarried children, and I am worried. Yehuda and I sat together for six months to build this seminar for worried Israeli parents. It is very rare for us to tell Israelis about this and for them to say, ‘It doesn’t bother me, I don’t care if they intermarry.’ The majority of Israelis in America want to see Jewish continuity within their family, but they don’t know where to start.”

Neta first became aware of the issue through her work in her clinic. “A couple would call me, asking to speak to me about something urgently. They would scramble to come meet me, and tell me about their shock when their son suddenly came home with a non-Jewish girlfriend. Very often, the son himself didn’t even know there was any issue, or that this was something important to them. Often, the son would say. ‘Mom, Dad, you sent me to public school from 1st grade, I went to a little bit of Hebrew school for a few years, but now I am 25 years old – what did you expect would happen?’”

Yehuda added in a similar vein: “At one of our seminars, some parents shared that they asked their daughter, ‘how could you have done this? We made kiddush each week; we ate matzah on Pesach!’ She responded, ‘I discussed this with my boyfriend – he says he has no problem drinking some wine each Friday night and having some crackers once a year!’ Basically, she had experienced a little cultural Judaism, but there wasn’t any deeper meaning, so it didn’t add up to more than that. It doesn’t matter if you are religious or secular, what is important is to pass on a form of Judaism to the next generation that has deeper meaning. I don’t want to belittle speaking Hebrew or following the news from Israel, but that isn’t sufficient.”

The pair have already run twelve seminars in Florida, one in Las Vegas, tens of parlor meetings, and the demand is growing. Simultaneously, Yehuda is involved in founding the Jewish Academy, the first school specifically geared for children of Israelis living in Florida. It is a pilot that will hopefully be replicated in communities across the US. “The two most significant developmental questions that any teenager asks are, ‘Who am I?’ and ‘What do I associate with?,’” says Neta. “These questions are at the core of the seminars: identity and belonging. I don’t want parents to sit their children down on the couch and say to them, ‘Let’s talk about identity.’ It is something that has to be integrated into a family’s day-to-day life. Just as a Jewish mother might educate a child about the importance of going to college and becoming a doctor, Jewish identity is something that has to be inculcated gradually. Even simple sentences like, ‘you are a Jewish child’, ‘we are proud to be Jewish’, and answering simple questions about how Judaism expresses itself in our life are very significant. In the seminars we start these conversations with questions like, ‘what was your first Jewish memory?’”

“In the seminars, we uncover a lot of pain,” says Yehuda. “The parents will often say, ‘We are Israeli’, and the children will say, ‘that’s lovely, but we are not’. This is one of the hardest things for participants, to separate and distinguish between being Israeli and being Jewish. It is so hard for people, and often they hold on very deeply to the idea that their children are Israeli even though they aren’t. It forces people to realize that when they leave Israel, their children will not be Israeli, but they will be Jewish. And that identity has to be developed.”

“We also try to assure the parents that we are not taking away their Israeli identity,” says Neta. “They will always be Israeli, but they have to think about their children. We ask them, ‘If intermarriage is a disaster in your eyes, how can you prevent it?’ By the way, there are no absolute assurances with this. Even Rabbi Kronfeld here doesn’t know, with certainty, which life choices his children will make. But as parents, we want to be able to say, ‘We did all that we could.’”

“We prefer to work with parents of young children, but they often say: ‘We’ll worry about that in a few years.’ They don’t understand that you need to start early. Otherwise they will come back to us once their kids are in college asking if there is anything they can do.” 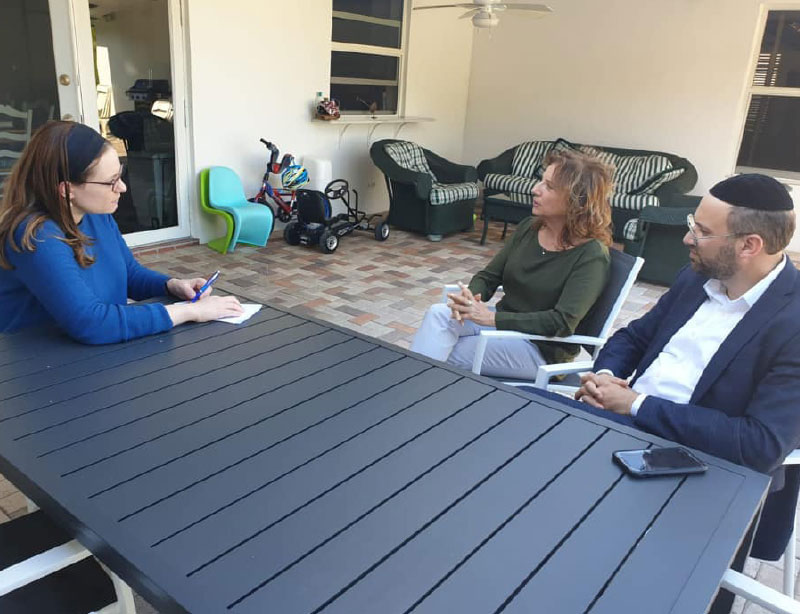 I asked Neta and Yehuda to give me a crash course of their seminar. Neta begins with the Tanach: “Every Jew has to know the story of the Tanach in order to show their children that every Jewish individual and family is a continuation of that story – that we are part of something larger. There are values and history embedded in every Jewish festival that must be taught, and key moments like a Bar or Bat Mitzvah should not be allowed to simply fade away, but become something longer lasting.”

Yehuda says a lot of it comes down to communication. “It is not enough to say, ‘I am a Jew’; you also have to say ‘as Jews we do x and y’. ‘As Jews we help other Jews, we do mitzvot’, and so on. There has to be something tangible; it cannot remain an abstract identity. If we do this, Judaism will inform the culture of our homes and our children will grow up with it.”

“A lot of it goes beyond direct communication,” says Neta. “Do you have a Tanach in the house, and how do you treat it? Do you have a chanukiah? There are things that don’t take much effort in Israel but require conscious effort in America. On Friday afternoons in Israel, the country enters into Shabbat. Here, you have to make it feel like Shabbat. Sending a ‘Shabbat Shalom’ message on the family WhatsApp group, having a Shabbat meal – if you don’t take active steps like these it will just feel like any other day. In Israel, children learn so much just from being in school. But in America, most Israelis do not pay for their kids to go to Jewish schools, so everything they learn has to come from the home.”

As our conversation came to a close, I had to ask Neta and Yehuda about their unique and surprising partnership. “We get questions like this all the time,” they laugh. “How do secular and Charedi people work together? Ultimately, we see that the people we work with like the partnership.”

Neta concludes with a line that stuck with me long after our meeting. “In Israel, we are part of two groups that generally don’t talk to each other. Yet somehow, here, as Israeli-Americans, we discovered just how much we have in common.”

Sivan Rahav-Meir is a media personality and lecturer. She lives in Jerusalem with her husband, Yedidya, and their five children, and serves as World Mizrachi’s Scholar-in-Residence. She is a primetime anchor on Channel 2 News, has a column in Israel’s largest newspaper, Yediot Acharonot, and has a weekly radio show on Galei Tzahal (Army Radio).