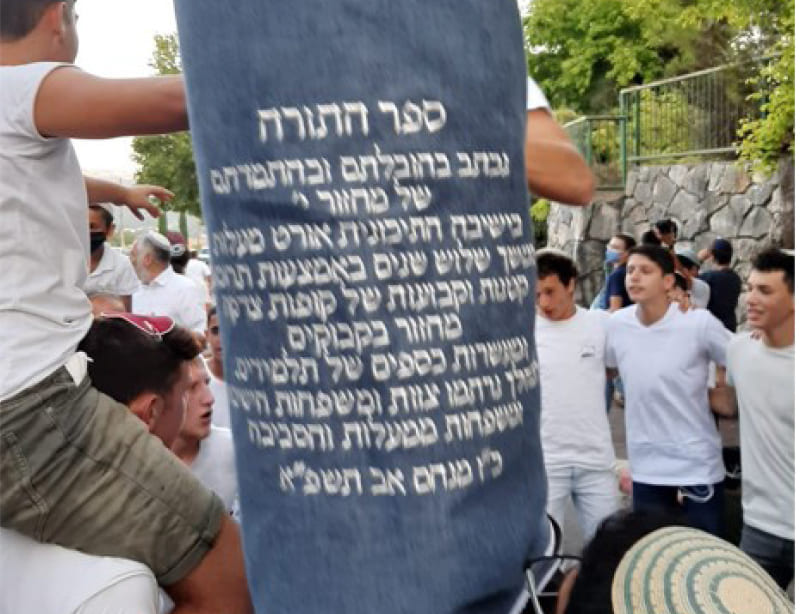 A Sefer Torah from Plastic Bottles

Shlomi Cohen wrote to me the following with a photo attached: “For three years my son and his classmates have been working towards an incredible goal. Their yeshivah high school, Ort Ma’alot in the Upper Galilee, was lacking a Torah scroll, and the students decided they were going to do something about it. Under the guidance of their mentor, Rabbi Avi Cohen, they decided to finance the acquisition of a Torah scroll from pocket money and small donations, but mostly from plastic bottle recycling.1

“The students collected thousands upon thousands of bottles, to the point where all the supermarkets in Ma’alot couldn’t handle the quantity! A special truck from a recycling conglomerate stopped regularly at the home of Rabbi Avi in order to load up the vast quantities of plastic bottles that had been collected.

“Although many people offered financial assistance, the students refused to accept large contributions. They wanted to feel the effort of the project, the process of adding one shekel to another, in the most literal way. They felt that if a wealthy individual would contribute tens of thousands of shekels, it would ruin the project. This was their project; they had to earn it.

“Just before the students graduated and embarked on different paths – some going to a yeshivah, others to mechinah (pre-military academy) or regular army service – the students, their parents and the residents of Ma’alot and the surrounding areas emotionally welcomed a new Torah scroll to the Ort Ma’alot yeshivah.

“As a parent of one of the students who participated in the project, I feel that all of us learned a lesson about patience, looking far ahead, and also about the honor that a Torah scroll deserves. And in a certain sense, this Torah scroll serves as an additional diploma, even greater than the certificate the students received at their graduation.”

1 In Israel, recyclable containers can be returned to a store and exchanged for the money that the container is worth.