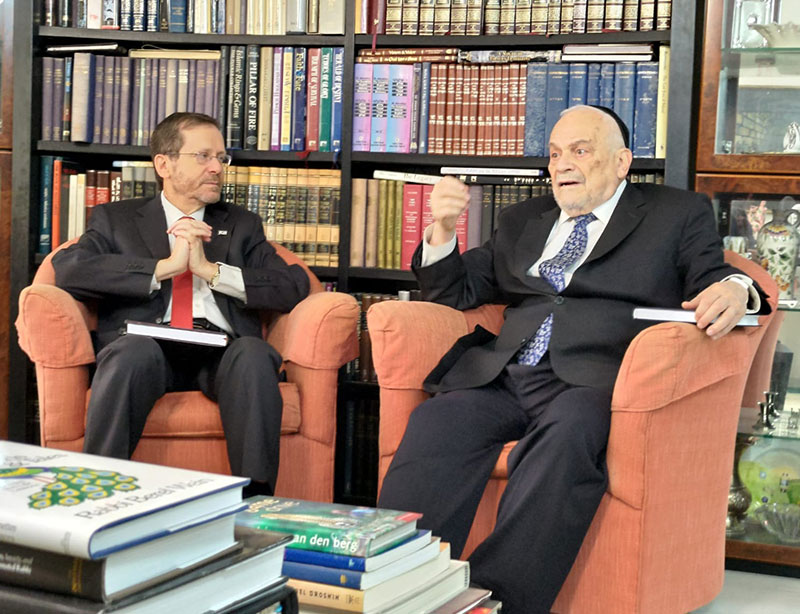 A single moment can sometimes influence our entire lives. A fascinating moment of this kind was revealed during a meeting on Pesach between Israel’s President, Isaac Herzog, and Rabbi Berel Wein.

Herzog came to the home of the 88-year-old rabbi who made Aliyah after many years as a writer, lecturer and American Jewish leader. Rabbi Wein has led many congregations as a rabbi and rosh yeshivah, helping hundreds of students prepare for rabbinical leadership roles across the globe. During their meeting, Rabbi Wein shared the following story with the President, who is named after his grandfather, Rabbi Yitzchak Herzog zt”l, who served as the Ashkenazi Chief Rabbi of Mandate Palestine and the State of Israel from 1936–1959:

“I was a twelve-year-old child in 1946 when my father woke me early one morning and said: ‘We are going to the airport. Rabbi Herzog is arriving in Chicago!’ The entire community waited in anticipation of the eminent rabbi’s arrival.

“The rabbi came to our school and told us about his recent encounter with the Pope: ‘I just returned from Rome after meeting with the Pope. I presented him with a list of thousands of Jewish children who were sent to Catholic monasteries by their parents in order to save them from the Germans. I told the Pope: ‘I am giving you this list as a representative of the Jewish people. I am requesting that you return these children to us.’ The Pope did not agree to this request. He explained that each child who enters a Catholic institution is baptized into Christianity and must remain a Christian forever.’

“Rabbi Herzog finished quoting the Pope, paused for a moment, and then burst into tears. I never saw anyone cry like that. He bent his head over the podium, and all two thousand years of our exile and persecution poured out of him. All the young Americans stood in stunned amazement.

“Afterwards, we all approached him to shake his hand, and he repeated this message to each of us personally. He looked at me, still a boy, and said to me: ‘Did you hear what I said? Do not forget what I said!’

“The words I heard that day changed my life. They changed the lives of many who were there. Many among that group of children established educational institutions and large Jewish organizations, and many also made Aliyah. Over the years, the young Americans in that lecture hall educated tens of thousands of Jews to be active members of the Jewish nation. All because of one speech, and because of one person’s tears.”

Sivan Rahav-Meir is a media personality and lecturer. She lives in Jerusalem with her husband, Yedidya, and their five children, and serves as World Mizrachi’s Scholar-in-Residence. She is a primetime anchor on Channel 2 News, has a column in Israel’s largest newspaper, Yediot Acharonot, and has a weekly radio show on Galei Tzahal (Army Radio).