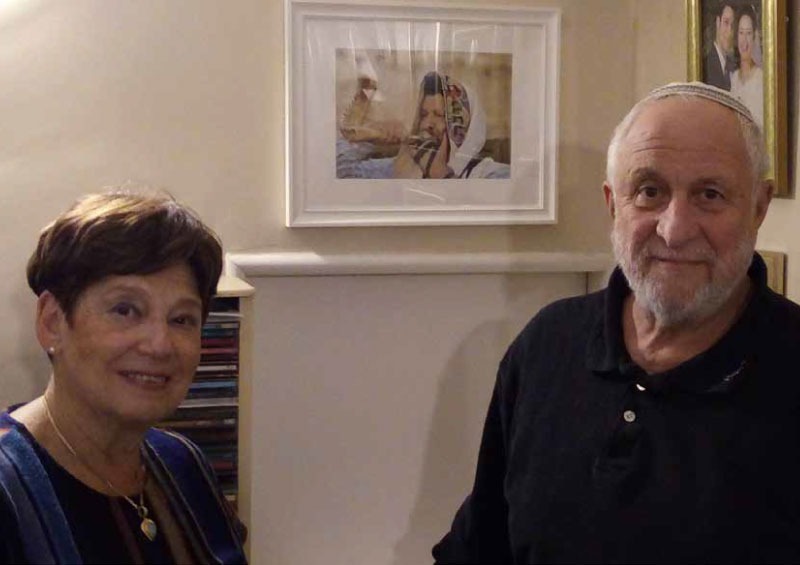 “Ari Created a Tsunami in This World”

Ari Fuld, 45, was murdered on September 16th, 2018, at the Gush Etzion Junction, at the entrance to a supermarket. As he was bleeding from a mortal wound, he found the strength to run after and shoot his attacker, saving other Jewish lives in the process. A few months later, the Editor of HaMizrachi spent time with Ari’s parents, Mary and Rabbi Yonah Fuld, at their home in Jerusalem.

Mary: When the army mistakenly discharged Ari, he wouldn’t give up until they let him back in again. He harassed them, pleading, begging, until they allowed him into the paratroopers. He was with them in the Second Lebanon War in 2006.

And it was the same when they sent him his discharge papers at age 40. He just tore them up. He wasn’t going to give up the privilege of being a soldier in the IDF so easily.

In fact he never gave up.

Yonah: Ari was deep in Lebanon resting under a tree with the guys. Two soldiers were injured and the commander sent in another two guys to get them, but they were also hit, so he tells Ari and his friend to go bring them back. Ari gets up from under the tree, puts his bag down and three seconds later a missile hits the exact spot he’d been sitting in. A piece of shrapnel flew into his protective vest. He took that shrapnel with him all over America, all over the world – he always had trouble getting it through security mind you – and he used it when he spoke about motivation, Israel, or making the most of life.

Mary: When Ari came out of that war, he said to me, “Mom, now I’m going to do what’s important.” And he sat in yeshivah every day, from eight in the morning to three in the afternoon, when he went to teach karate.

Yonah: His teaching was based on a method called Tora Dojo. Nothing to do with Torah although it has a Jewish orientation. Tora means tiger in Japanese.

Mary: A guy came to the shiva, and told us he used to beat up people in the street. His parents sent him to Tora Dojo because they thought it had something to do with Torah, and Ari taught him. “Your son changed my life,” he said. “I stopped being a bully. Ari taught me how to fight, and how not to fight.”

Yonah: Another one wrote, “I hate to say Ari Fuld was my karate teacher, it’s so diminishing. Ari Fuld taught me to love Torat Yisrael, Eretz Yisrael and Am Yisrael. He taught me how to be a better human being, how to relate to people and”… listen to this… he said, “I’ve been to yeshivah my whole life, I went to Israel for two years, I learned, I went to yeshiva college, but it was Ari Fuld who taught me how to daven.”

Once a father came to Ari after karate class. “Ari, I apologize, I didn’t give my boy his Ritalin today. I’m so sorry, it will never happen again.” Ari says to him, “Ritalin? Stand here.” And he takes the boy and asks him to go through the kata movements. The boy does everything perfectly and Ari says to the father, “See that? Don’t you ever give him Ritalin when you send him to me!”

Mary: Another man comes to the shiva. He says, “Many years ago I took classes with Ari. I told him I didn’t have money to pay him. And he said don’t worry about it, we’ll work it out, just come. And all the years I came, and he did so much for me.” And then he reaches into his pocket and pulls out an envelope. “Here’s a check for the back money I owe him.”

Yonah: It was never about money though, never. And never about ego. And that’s what we’ve been hearing for four months now. We never knew the impact he had on tens of thousands of people. One person after another: “I met Ari and my life changed.” Or “I never met Ari but he changed my life.” Over and over again…

Mary: A soldier came to us, big guy. He gets down on his knees and says, “Ari changed my life. I was 15 years old, left high school in Wisconsin and came to Israel to find out something about my Jewish roots. I wanted to enlist in the army but they wouldn’t take me because I was huge. I met Ari somewhere and told him I was thinking of going back to the States to join the US army. “Are you crazy? Are you going to fight for something that’s not yours? Fight for something that’s yours! You’re going to lose weight. I’m going to call you every week and you’re going to lose weight.” He lost 70 pounds and the army took him.

Mary: One more thing about his learning. He always walked around with a Gemara in his hand. He had a fire burning in him. He didn’t sleep. Every Thursday night he would go to mishmar (all-night study) at Netiv Aryeh; Rav Bina would give a shiur till late and Ari would take the boys to the Kotel, dance and sing and share divrei Torah. Sometimes he went on to learn on his own till Shacharit. He wasn’t a sleeper, he had too much to do.

Yonah: Yes, he found time to answer anybody who wrote against Israel on social media. He was a defender of Israel, advocating, explaining, fighting for his beloved homeland.

Mary: Yet with all his fighting spirit and physical strength, he was a softy. One young man told us that as Ari was taking the yeshivah guys down to the Kotel, he saw a little girl crying. He stopped, left the group and talked to this girl to find out why she was crying and how he could help.

Yonah: And he did it all so naturally, because it was the right thing to do.

Mary: Yes, for example, every Friday he would tape a dvar Torah over a BBQ or in his dining room, and he would start “Hello all from the beautiful rolling hills of Judea.” On his last Shabbat he was giving a dvar Torah, and suddenly Tamar, his daughter, comes up to him – she was going away for Shabbat – and asks Ari to bless her. So instead of saying I’m in the middle of filming now, don’t bother me, he stopped what he was doing, kept the video going and blessed his daughter.

Yonah: That was him. A great family man. His wife and children meant everything to him. He also had a wonderful sense of humor, and an impish childlike streak. Like his son, Yakir, said at the funeral, “When we got a toy he was the first one to take it out to play with, and if you ask all the nieces and nephews what they remember about him, they’ll say he threw us up in the air and played and wrestled with us.”

Mary: Yes. He was a regular guy. Just a regular guy from the States. A mensch. There was a show on TV here once a week, when Yariv Oppenheimer, head of Peace Now, would debate Ari, and it often got very heated. But Yariv came to the shiva and told us that “no matter what went on on-set, we went upstairs afterwards, had a drink together, schmoozed, and Ari was always a real mensch.”

Yonah: He just cared for every human being. He was selfless, really selfless. He just gave and gave and gave.

Listen to this story one of his students wrote us: “I was in Ari’s 6th grade class. We had a school hike, 5th and 6th grade together. We had to go through deep water or jump across something. And everybody did it except for one boy, who was too afraid. We all tried to encourage him and hold his hand, but he wouldn’t do it, he was terrified. Ari, who was not his teacher, said let me help you. He went deep into the water, stood there and told the boy to step on his feet. And he stepped on Ari’s feet and crossed over…”

Mary: He did everything with enthusiasm, passion, whether it was karate or singing, blowing the shofar, learning. Everything. He even kissed the ground here every time he came off the plane. How many people do that these days?

Ari created a tsunami in this world, that’s the only thing I can say. A tsunami of passionate, positive Jewish, Zionist, human action.

Besides our personal loss, which I can’t even describe, I just feel like there’s now an empty black hole in the world. In Am Yisrael…

Yonah: Yeah, we’re ripped apart inside, and he’s not coming back. We’re not waking up from this one. But all those people that are with us, supporting us, telling us Ari stories or whatever, it has to be a comfort somehow. It’s uplifting, inspiring and as rational human beings, we have no choice but to move ahead. We’re here in Israel, we have what to live for, and we’re going to keep on going.

Mary: When the Prime Minister was here just before the levaya (funeral), he was trying to understand how Ari had had the strength to run after the terrorist after being stabbed. He said it must have been the last blood in his body. My son Doni – who looks exactly like Ari – said, “With all due respect to the Prime Minister, it wasn’t the last blood in his body that allowed him to do that. It was his neshama (soul)”.