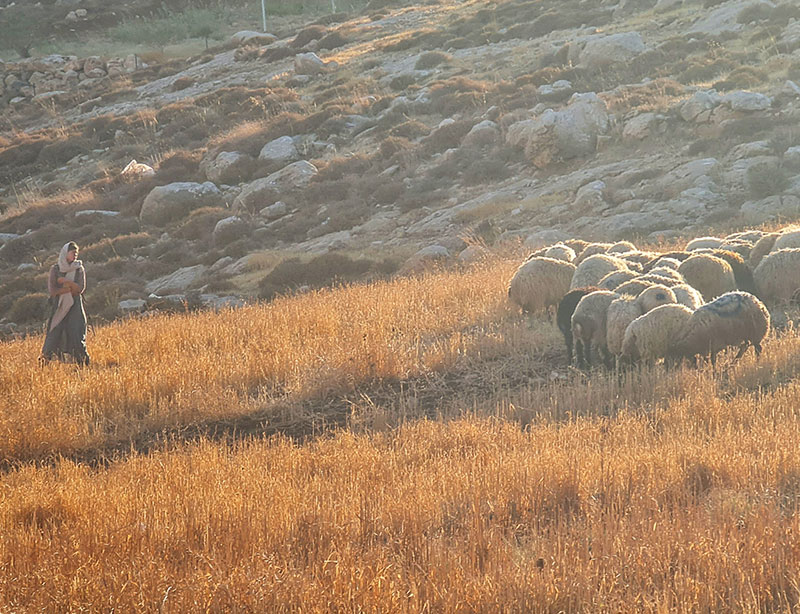 This is my home.

I live on a mountaintop on the southeastern tip of the Judean Frontier. I could try to describe it to you in words, but I’ve come to believe that’s impossible; it would be like showing you a sheet of musical notes instead of taking you to a philharmonic orchestra. 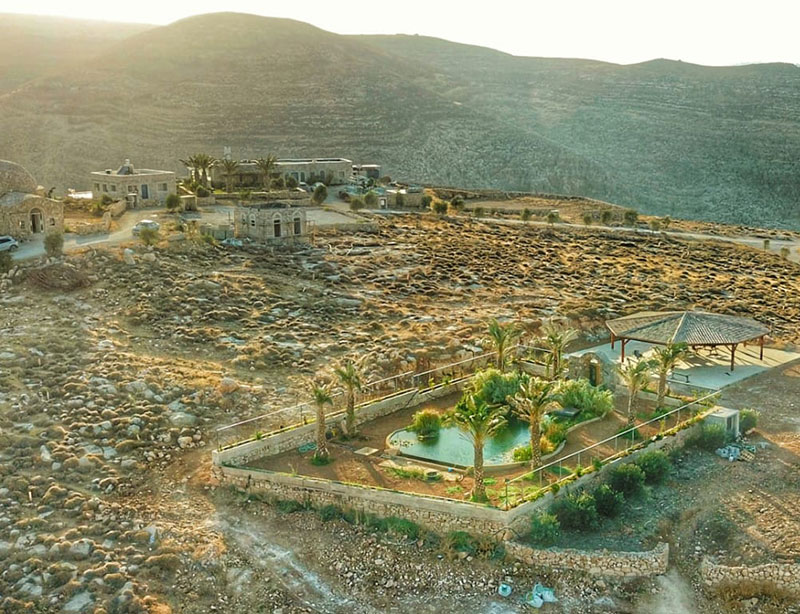 Along with my three pioneering partners and their families, we transformed these previously inaccessible mountains from a barren desolation of rocks, thorns, and tumbleweeds into a Garden of Eden-like oasis unlike anything in the Land of Israel.

From a distance, our farm appears on the horizon like an ancient Judean Kingdom. I’ve heard the word “Camelot” thrown around as well. Rising from the center of the mountain is our castle-like retreat center which, although only half completed, is already a destination which people from all over the world come to experience.

On the summit of the highest mountain on our property we built our beit tefillah, which is unparalleled in its mystical beauty. It is already regularly booked with a wide array of spiritual concerts and experiential programs such as hitbodedut, hishtokekut, and other types of ancient meditation techniques that are once again coming to life in the Land of Israel. 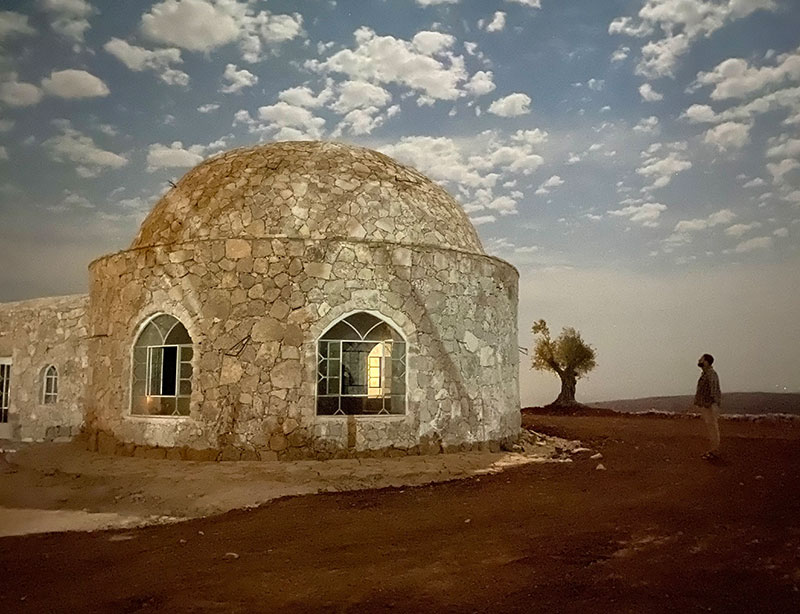 A short walk away one can find an ancient cave, untouched for millennia, which could undoubtedly tell great stories of our history from King David and the Maccabees, to Bar Kochba and the battles for Judea. In the southern valley surrounding our mountain are the organic vineyards we planted five years ago which have just recently yielded our very first bottles of wine. Ascending the mountain, you’d trek through our nearly four thousand blossoming fruit trees, an innovative ecological freshwater oasis, a horse flanked by a flock of sheep, and intoxicating views of the Dead Sea, Masada, Jerusalem, and the Judean Desert. 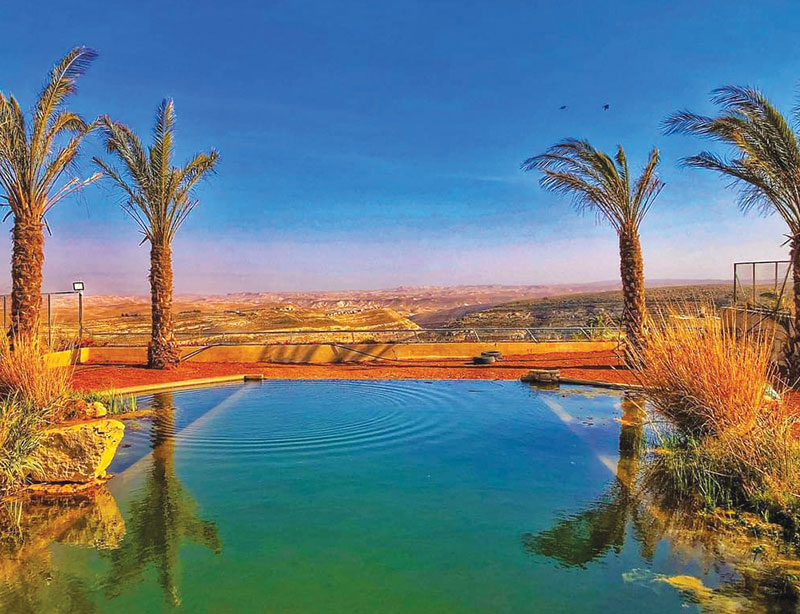 These mountains were designated by the Israeli government for agriculture and tourism, and if our goal was merely to fulfill that mandate, we could have simply built functional structures and completed construction long ago. But we all felt that what we could bring to life in these mountains would be leTiferet Yisrael, a source of pride and splendor for the nation of Israel. A place of indescribable beauty, our goal was to transform these barren mountains into nothing short of a jewel in the crown of Judea. Although we are far from completion, I am deeply grateful that our farm is already considered among the most beautiful destinations in Israel.

The head of the Gush Etzion Regional Council first sent us to these mountains because settling them would be, in his words, “the most strategic and geopolitically important endeavor in Gush Etzion.” But it didn’t take long for me to realize that strategy and geopolitics were not the real reasons we were settling these mountains. The real reason we are here is because we are Jews, and this is our natural home, where we can flourish and grow.

Before I moved here, I felt like a fish out of water, flopping around on the river bank gasping for air. The fish has a short memory; it thinks that the natural state of a fish must be to gasp for air and slowly die. But then the fish flops its way back into the river and, revitalized, finally realizes, “Oh, this is what it is to be a fish!” This is how I felt when I planted my roots here in Judea. I was filled with a new sense of life, vitality, joy, and mission. “Oh, this is what it is to be a Jew!”

A taste of redemption

Judea is not merely a geographical location on a map or a destination you type into Waze. Judea is a return to our identity; a journey of self-actualization and self-discovery. Judea is a taste of redemption.

We are approaching the holiday of Pesach, the chag hageulah, the “holiday of redemption”. Before I moved here, “redemption” was just a word, a theological concept I mentioned three times a day in my tefillot since grade school. But since coming to Arugot Farm, I have experienced moments, however fleeting, when redemption became more than just an idea.

Ramban explains why he calls the book of Exodus the Sefer HaGeulah, the “Book of Redemption”, even though only the first twelve of its forty chapters recount the Exodus from Egypt. Redemption, he explains, is not just freedom from slavery, or freedom from anything for that matter. Redemption is self-realization, actualizing our potential and fulfilling our mission in the world. Only after receiving the Torah at Sinai, building the mishkan within which G-d’s presence would dwell and becoming a priestly people and holy nation – only then would we be truly redeemed.

One such moment struck me on a Shabbat afternoon as I davened Mincha on a mountaintop surrounded by our sheep. While smiling at the absurdity of having transformed myself from a media guy into a shepherd, I found myself reflecting on the unexpected story of our sheep.

Though sheep provide us with meat and wool, we invested in our flock of sheep primarily because of the critical role that sheep traditionally play in securing property in Judea – a law of the mountains respected by the Arabs and Bedouin in our area. While we have very positive and productive relationships with all of our neighbors, having a flock of sheep is a necessary prerequisite to being a recognized presence in our neck of the woods.

Early on, due to an unexpected series of events, we ran out of funds as we were building our retreat center. Having already signed a contract with the builder, we told him that, for reasons out of our hands, we couldn’t pay him what we owed him. Needing the money, he suggested that we pay him with our sheep, a reasonable request which we agreed to honor. While herding the vast majority of our sheep onto his wagons, it struck me that there is something intuitively natural about a Jew, living in Judea, paying with sheep.

As we built up our flock again, we began receiving calls from local Judean youth who dreamed of becoming shepherds and wanted to shepherd our flock. And just like that, we had a team of young barefoot shepherds and shepherdesses to tend our flock, take them out to pasture and milk them on schedule. 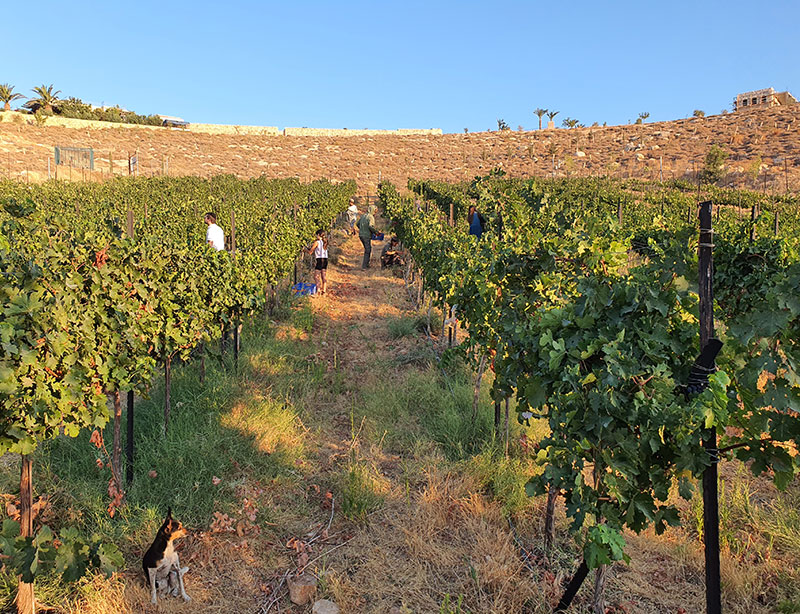 Soon afterwards, an expert cheese-maker came to teach our young shepherds the art of making halloumi, feta, and yogurts (to name just a few) and what was once an empty room in our retreat center became a cheese factory.

Long before law, accounting and medicine became the Jewish professions of choice, King David shepherded his flock of sheep in these very mountains. And just as our forefathers, when asked about their occupation by the mighty Pharoah, responded, “Your servants are shepherds, both we and our forefathers”, the time has come when we, their children, are proudly assuming that role as well.

Then there was the day that the Germans arrived. They told us that they were artisans and craftsmen, many of them children and grandchildren of Nazis. They had come, in their own words, to do teshuvah. While their forebears had brought curses and destruction upon the Jewish people, their goal was to bring blessings and to build. When I asked why they chose Arugot Farm from all the other settlements and mountaintops, they explained that we are the furthest settlement in Judea – where the world stands most against us. And if this is where the world stands against us, they explained, then this is where they wanted to stand with us.

I’ll never forget the moment when I witnessed our Arab workers, descendants of Yishmael, harmoniously working together with our German volunteers, descendants of Esav, to build a Beit Knesset for Jews in Judea. That was a moment in which a great evil of our history became a great blessing. That, too, was a moment of redemption.

For too long, young Jews from around the world have flocked to ashrams in India seeking an authentic spiritual encounter – not knowing that the deepest, richest, and most profound spiritual legacy is right here in the heart of their own homeland, in the ancient hills of Judea.

Over the years I have witnessed the extraordinary power of these mountains to pierce the most calloused hearts, shattering the barriers of cynicism that so many of us harbor.

I have seen yeshivah students realize that we are not just the people of the book but also the people of the land – and that they, too, can play a central role in carrying the story of the Jewish people forward. And I have seen left-wing activists who realize that the Israeli-Palestinian conflict may never be solved, but that it can be transcended. The power of these mountains to challenge and inspire is nothing short of divine. 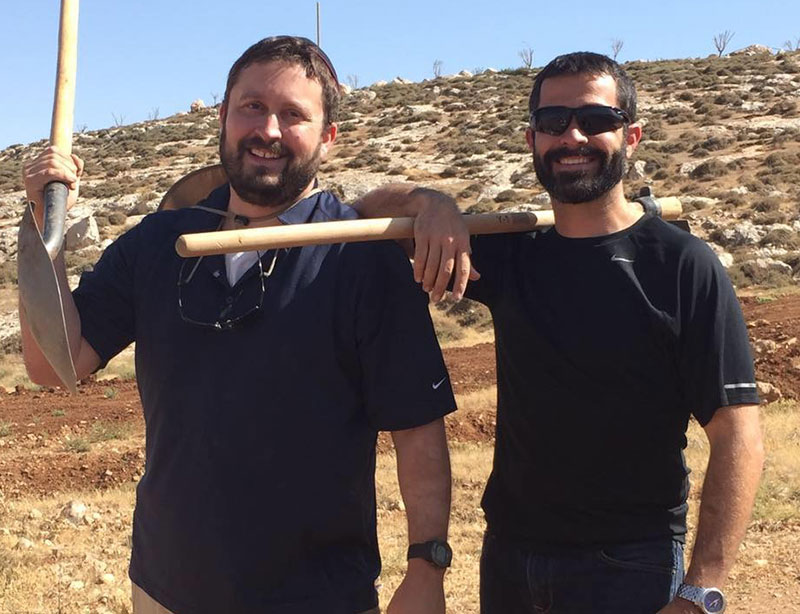 Rav Kook explains that now, in our times, when we say the words VeTechezena Eineinu Beshuvcha LeTzion BeRachamim, “May our eyes see Your return to Zion in mercy”, in the Amidah, we are not asking G-d to let us one day see the future redemption. We are asking Him to give us the eyes to see that it is happening now!

Because it is. But don’t take my word for it – come out to the Judean frontier and experience it for yourself. Whether you live in Israel or abroad, it would be our honor to host you at Arugot Farm and introduce you to the holiness and beauty of Judea – to your very own taste of redemption.

Ari Abramowitz and Jeremy Gimpel, along with their partners Roni Moshe and Yossi Leavitt, are co-founders of the Arugot Farm and retreat center in Southeastern Judea. Learn more about Arugot Farm at www.ArugotFarm.co.il