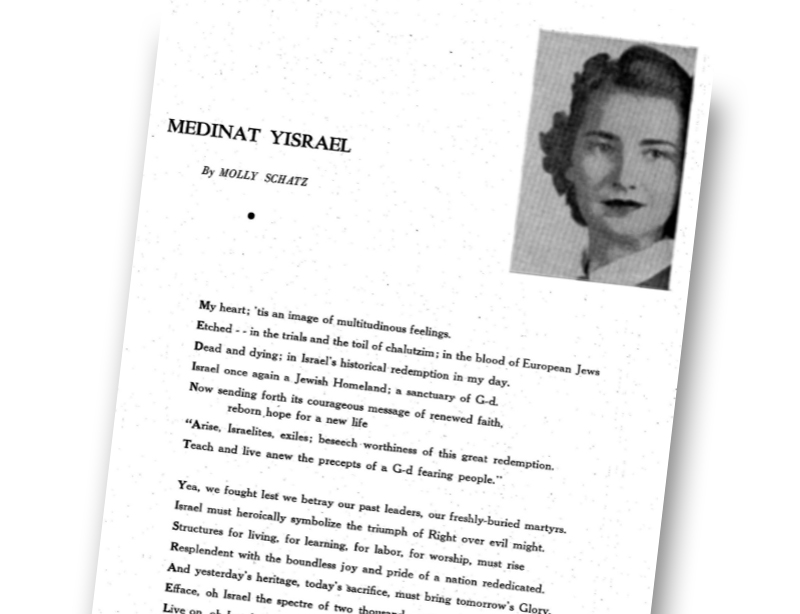 Blast From the Past

Molly Schatz, an active member of HaPoel HaMizrachi – Religious Zionists of Chicago (RZC), served as an RZC Council Delegate and was among the organizers of Camp Moshava. A gifted writer, Molly edited RZC’s Sabbath Voice – Kol Shabbat newsletter (still distributed weekly, now via email), never faltering in her efforts to produce a quality bulletin each week.

Together with her husband Louis, who worked with tremendous zeal as co-Chairman of RZC’s Overseas Relief Committee, the Schatzes were deeply devoted to strengthening Religious Zionism in America.

In 1953 they moved to California, continuing their work for Mizrachi, locally and nationally.

In the Rosh Hashanah 5709 (1948) issue of HaShofar, the annual magazine of HaPoel HaMizrachi–Religious Zionists of Chicago, Molly Schatz authored this heartfelt poem, which eloquently captured the awe-inspiring emotions of the day, a few years after the trauma of the Holocaust and only a few months after the establishment of the State of Israel. n

My heart; ’tis an image of multitudinous feelings.

Etched — in the trials and the toil of chalutzim;
in the blood of European Jews.

Dead and dying; in Israel’s historical redemption in my day.

Israel once again a Jewish Homeland; a sanctuary of G-d.

Now sending forth its courageous message of renewed faith,
reborn hope for a new life.

Teach and live anew the precepts of a G-d fearing people.”

Yea, we fought lest we betray our past leaders, our freshly-buried martyrs.

Israel must heroically symbolize the triumph of Right over evil might.

Structures for living, for learning, for labor, for worship, must rise

Resplendent with the boundless joy and pride of a nation rededicated.

Live on, oh Israel, in Divine fulfillment of an historic Destiny.