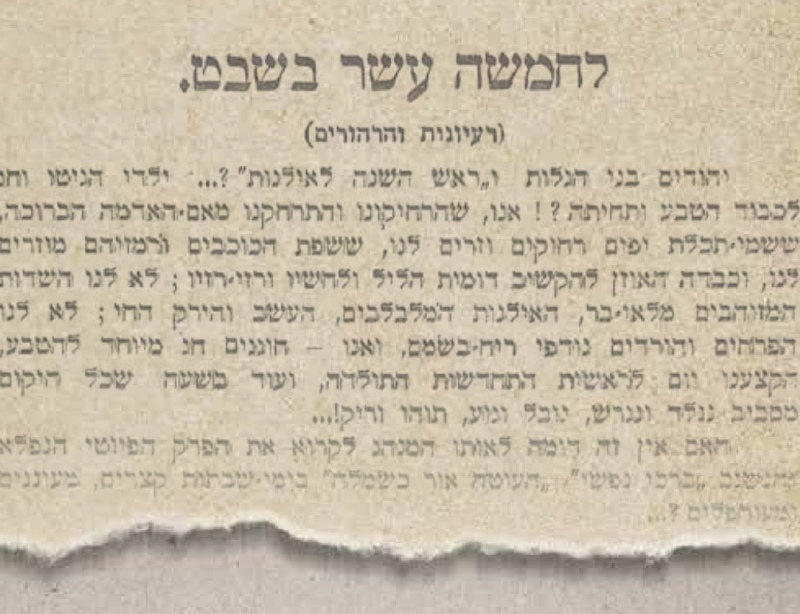 Blast From the Past

During this 120th anniversary year of the Mizrachi World Movement, we are delving into the HaMizrachi archives. Here’s a piece from 1919.

Jews of the Diaspora and the “Rosh Hashanah for trees?” Children of the ghetto and a holiday in honor of nature and its rebirth? We, who have distanced ourselves and been distanced from the blessed land, to whom the beautiful blue skies of our land are far away and unknown to us… not for us are the golden fields, the blooming trees and grass; not for us are the flowers and roses whose scent blows in the wind.

And yet [tomorrow] we are celebrating Tu BiShvat, the holiday of nature; we have set aside a day for the beginning of its renewal, even as all that surrounds us is frozen and dead, chaotic and empty! Is this not similar to our custom to recite the beautiful poem of Barchi Nafshi [in celebration of G-d’s world] on Shabbatot that are short, cloudy and dark?

No! We have not always been distant from nature and its magic! The Tanach is our witness; our Book of Books testifies eternally to our people’s longing for nature, our love of nature and the lives bound up with nature that we lived in earlier generations. We are the children of the ancient nation which came to faith through nature. Unlike the other nations, we did not treat the forces of nature as gods but instead used nature to perceive G-d’s providence and unity.

“The heavens declare the glory of G-d, and the firmament shows His handiwork.” “How many are Your works, Hashem! In wisdom have You made them all.” “Lift up your eyes on high, and see Who has created these!”

Yitzchak Rivkind was born in Lodz, Poland, and he studied in Yeshivot in Volozhin and Ponevezh. He was one of the main organizers of Mizrachi in Poland, through which he published a book detailing the Netziv’s connection to the Hibbat Zion movement. He moved to New York in 1920.