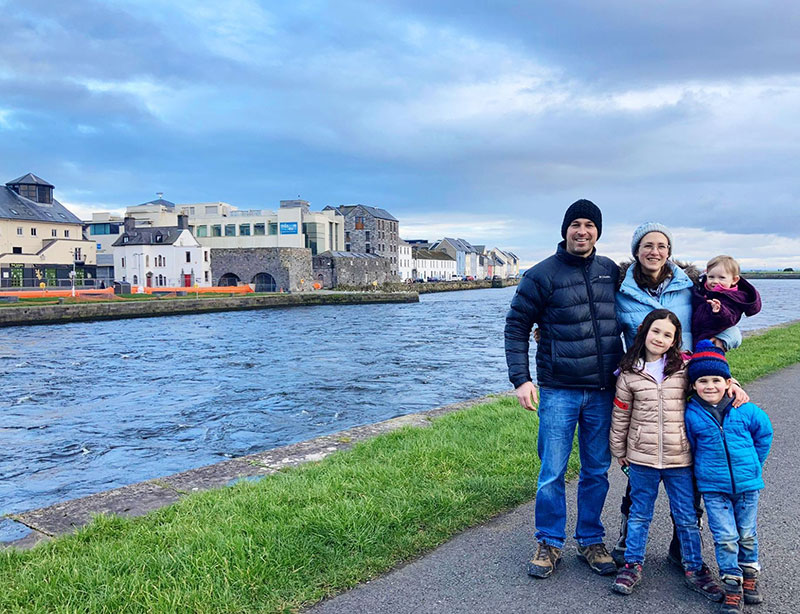 Timna and Omer Shalev and their children in Dublin

In the 2020 World Zionist Congress elections, the Orthodox Israel Coalition (OIC), a broad-based coalition consisting of Mizrachi and major Religious Zionist and Modern Orthodox organizations of America, was highly successful, winning 27 seats and influential leadership positions in Israel’s national institutions. The OIC’s electoral success has enabled our movement to increase the number of Religious Zionist shlichim serving Jewish communities throughout the world.

When Omer and Timna Shalev arrived in Dublin a few years ago to serve as shlichim of the World Zionist Organization (WZO), the community was elated. After close to 30 years without shlichim, the Dublin community once again had teachers from Israel to help strengthen the community!

I asked Timna and Omer why they came to Dublin. “I had wanted to go on shlichut for a long time,” Timna explained. “I worked in the Museum of the Diaspora in Tel Aviv, and that work gave me a desire to go on shlichut to help communities in the Diaspora. Omer had worked for several years in the IDF and the Prison Services, but after about 10 years I convinced him to join me on this adventure.”

At its peak in the 1940s, Dublin had close to 5,000 Jews, but today that number has decreased to just 500. From 1921 to 1936, the Chief Rabbi of Ireland was Rabbi Yitzchak HaLevi Herzog, who would later become the first Chief Rabbi of the State of Israel, and whose grandson is the current President of Israel, Isaac Herzog.

“One of the things you learn in a small community is that shlichim play an even greater role,” said Omer. “Our official role through the morim shlichim program is to teach in the Jewish school, but we also run youth activities and are very involved in the Maccabi old-age home, chessed projects, the chevra kadisha and more. The only thing I haven’t done yet is be a mohel, but I have been a sandak five times so far!”

The Jewish infrastructure in Dublin is less developed than in larger communities. It is hard to find kosher food, there is no eruv, and half the students in Stratford, the small Jewish school, are not Jewish. “In the school, we developed a strong relationship with Delia, a non-Jewish teacher. On Yom HaShoah, she came with her father to a Holocaust memorial event, and we learned that he is a founder of a Holocaust memorial organization in Dublin. In 1967, as he followed the news of the Six Day War, he developed a strong connection to Israel and taught Delia to appreciate the uniqueness of the Jewish people. It is heartening to see, especially as the Irish government is often very anti-Israel.”

In recent years, an increasing number of young Israelis have moved to Dublin for work opportunities. “On the last night of Chanukah, an Israeli family reached out to join us for candle lighting. It turned out this family had been living in Dublin for a number of years. We had never seen or heard of them, and we asked them what made them reach out now. Embarrassed, the mother said she suddenly had a realization that today is Chanukah and her daughters, growing up in Ireland, had no idea what Chanukah was. It is heartbreaking to see so many Jews losing connection to their heritage, and we hope to do all we can to connect them with their heritage.”

As two of the hundreds of WZO shlichim around the world, the Shalev family is lighting a candle of Judaism and connection to Israel in the heart of Dublin – inspiring hundreds of people, young and old!

Gael Grunewald is Vice Chairman and Head of the Department of Education of the World Zionist Organization.