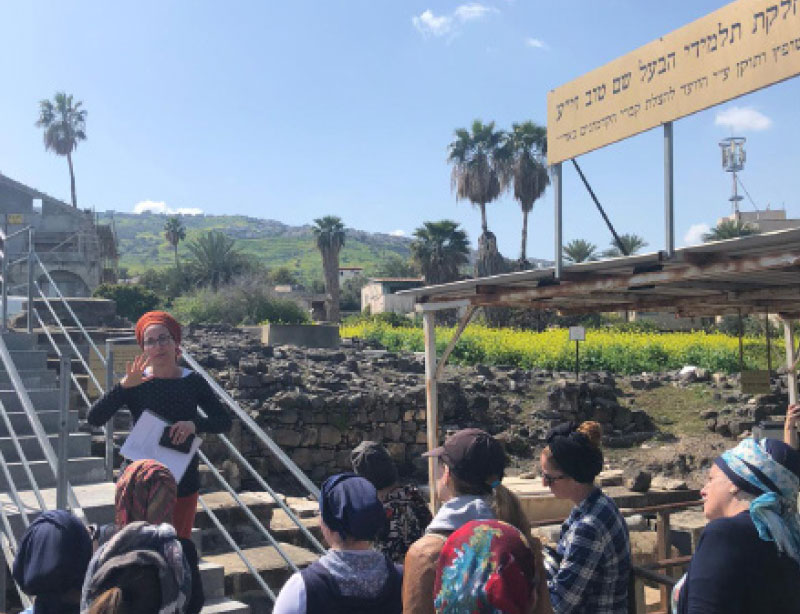 Chassidic Chalutzim: Rav Menachem Mendel of Vitebsk and the Aliyah that Changed History

In the historical consciousness of the Jewish people, the Chassidic movement is generally viewed as a phenomenon of “exilic Judaism.” Even those who study the Torah of the Ba’al Shem Tov, the Maggid of Mezeritch, and their students, do not perceive the connection between the Chassidic revolution and the renewal of Jewish nationalism in the Holy Land. But this perspective is historically false, as the extraordinary life story of Rav Menachem Mendel of Vitebsk so clearly demonstrates.

Rav Menachem Mendel of Vitebsk has been ill-treated by many of the writers of Jewish history. Though generally regarded by the Chassidim as one of the early fathers of the movement, referred to in his lifetime as “our Rebbe in Eretz Yisrael,” historians have largely ignored his crucial contributions to the renewal of the relationship between Am Yisrael and Eretz Yisrael, and the resettlement of the Land of Israel. Israeli schools teach their students about the First Aliyah (1882–1903), the Second Aliyah (1904–1914), and so on, naturally implying that before the First Aliyah there was nothing. But this is a historical distortion, for before the First Aliyah there were several large and important waves of Aliyah, the first of which was the Aliyah of Rav Menachem Mendel of Vitebsk and about 300 of his students.

Rav Menachem Mendel was born somewhere between 1730 and 1740. Considered the senior student of the Maggid of Mezeritch, he saw the Ba’al Shem Tov as a child and absorbed his teachings. After the passing of the Maggid, Rav Menachem Mendel became the most important Chassidic figure in White Russia (Belarus), establishing his court in Horodok. Stories from that era describe Rav Menachem Mendel’s glorious attire, and his majestic and impressive leadership, a style that would later be found in the court of the Rebbes of Ruzhin.

After the meeting, the people ask Rav Ya’akov Yosef: “What is the nature of this man, who dared to come before you while smoking a pipe, without a belt, and wearing shoes with silver laces?” Rav Ya’akov Yosef explained with a parable: “A king once possessed a beautiful gem of enormous value, and he was concerned that wherever he would hide the gem, thieves would find it and steal it from him. And so the king hid the stone in an outhouse, for no thief would ever expect him to hide a stone of great value in such a lowly and filthy place. So too, Rav Menachem Mendel is lowly in his own eyes and is the very embodiment of humility, and he is concerned that his attribute of humility will become sullied by klipot (impure spiritual forces). And so he hides his humility in a ‘filthy place’ – in arrogance!”

In this vein, Rav Menachem Mendel would sign his letters with the ‘title’ of הַשָּׁפֵל בֶּאֱמֶת, “the truly lowly.” Though his royal demeanor and humility appear to us as a contradiction, it is not so in Chassidic thought. The truly humble Jew is not someone who considers himself to be worthless but rather one who fully understands his own worth but at the same time does not attribute his virtues to himself. The prototype of “lowly royalty” is King David, who did not consider it beneath his dignity to leap and dance before the holy Ark as it was brought to Jerusalem, and said about himself: “Before Hashem, Who chose me… to appoint me prince over Israel, the people of G-d, before Hashem will I dance, and dishonor myself even more, and be low in my own eyes!” (Shmuel II 6:21–22)

Before leaving for Eretz Yisrael, Rav Menachem Mendel made great efforts on behalf of both the land and the people of Israel. He played a critical role in founding a charity fund to help support the Jews of Eretz Yisrael, which later became known as the Kupat Rebbe Meir Ba’al HaNeis. Many people are familiar with the Jewish National Fund’s iconic blue tzedakah box, used by Jews throughout the the Diaspora to support the Zionist chalutzim (pioneers), but don’t realize that this box was inspired by the fund established by Rav Menachem Mendel of Vitebsk. Every Friday, just before candle lighting, poor Jews throughout Europe would set aside a few pennies from their meager possessions as a gift of love to the early settlers of Eretz Yisrael. They considered the brave few who settled in Eretz Yisrael to be their shluchim, their messengers, and desired to bear a part of the heavy burden these settlers had taken upon themselves.

Among the tzaddikim who later administered the fund were the Rebbes of Ruzhin and Rav Schneur Zalman of Liadi, the founder of Chabad and a student of both the Maggid of Mezeritch and Rav Menachem Mendel. When Rav Menachem Mendel made Aliyah together with hundreds of his Chassidim, these funds were critical for their economic support.

Before leaving for Israel, Rav Menachem Mendel also made bold efforts to bring peace between the Chassidim and their opponents, the mitnagdim. During the years he served as a Rebbe in Europe the opposition to the Chassidim reached its zenith. In nearby Lithuania, the great Rav Eliyahu of Vilna, the Vilna Gaon, led a fierce opposition to the Chassidim, signing several letters formally excommunicating them. As Chassidim were harassed in towns and cities throughout the region, Rav Menachem Mendel decided to do everything in his power to seek peace at all costs. Together with Rav Schneur Zalman of Liadi, he traveled to Vilna to speak with the Gaon.

As is well known, their efforts did not succeed, and they never met with the Gaon. There are different traditions describing how the events unfolded. Some say the Vilna Gaon left the city to avoid meeting Rav Menachem Mendel, while others say that he ordered his associates to bar Rav Menachem Mendel from entering his home. Those who propound the second version add that Rav Menachem Mendel later said: “It’s chaval (unfortunate) that I didn’t break down the door…” Even after making Aliyah, Rav Menachem Mendel refused to give up hope, sending letters urging peace and reconciliation to leaders of both the Chassidim and mitnagdim.

Rav Menachem Mendel believed deeply in Jewish unity, and fulfilled those beliefs in practice. Though it is now common for Ashkenazi and Sephardic Jews to marry one another, it was nearly unheard of in the 18th century. But Rav Menachem Mendel did not hesitate in choosing a Sephardic bride for his son, Rav Moshe – a revolutionary decision in that generation.

On his way to Israel, Rav Menachem Mendel received the blessing of many great rabbis of the generation, though there were some who opposed the venture, fearing the dangers of travel and the unknown challenges awaiting the group in Eretz Yisrael. Unfortunately, many of their fears soon became reality, when 30 Jews died when one of the group’s chartered ships sank at sea.

Upon reaching the port of Akko, the group first went to live in Tzfat, where they received a cold welcome from the local Ashkenazi community. They soon moved to the northern town of Peki’in, where they hoped to build a farming community. Ultimately, Rav Menachem Mendel decided to move with his Chassidim to Teveria (Tiberias), where he and his Chassidim developed a warm relationship with the local Sephardic community and where Rav Menachem Mendel lived until his death in 1788. The three-story home he bought in Teveria stands until this day on a promenade on the shores of the Kinneret. 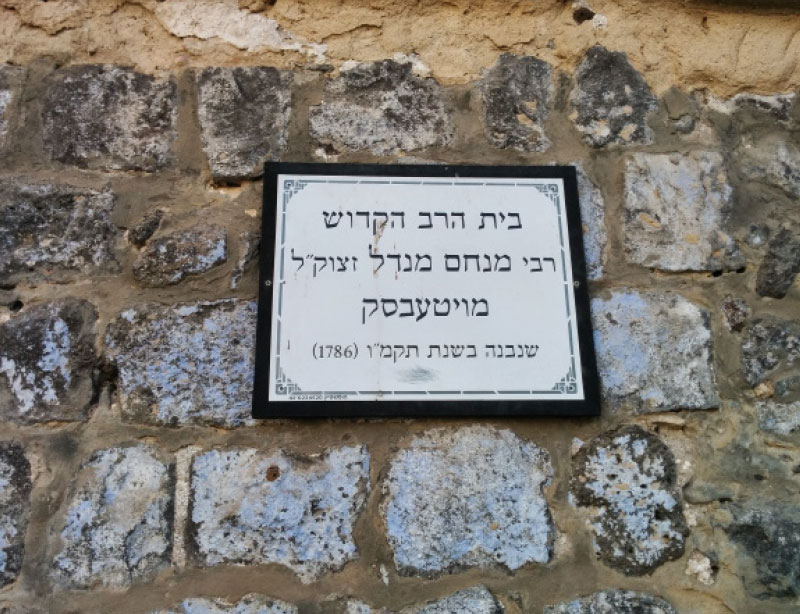 One time, the Chassidim heard what they believed was a shofar blast in the distant hills. They came to ask Rav Menachem Mendel: “Is it possible that the Mashiach has arrived?” He stood up, opened the window, took a deep breath and answered: “He has not yet come…”

This story is fascinating. It’s one thing to smell the air to see if the Mashiach has arrived. But why did Rav Menachem Mendel stick his head out of the window? He could have smelled the air inside his home! I once heard a sweet explanation of this story from Rabbi Yitzchak Ginsburg, who explained that in the home of Rav Menachem Mendel there was always the scent of Mashiach. This was the air that he lived and breathed, all the days of his life. When his Chassidim came to ask him about Mashiach, they meant to say: “Has Mashiach been revealed in the world outside of your home? Has the time come for the entire world to be redeemed?” To answer this, Rav Menachem Mendel had to open his window, to breathe in the air from the world outside.

In one of his letters, Rav Menachem Mendel wrote about the struggles and suffering that one must endure to gain a foothold in the Holy Land:

This is my response, with all my heart, to all those who inquire about and wish to live in the Holy Land: It is critically important to understand this Land… that every Jew who comes to the Land will experience many reversals and complications until he finds his proper place and finds delight in its stones and cherishes its dust and loves the ruins of Eretz Yisrael more than the palaces of exile. This will not happen quickly; not in a day or two days or a month or a year, but only after several years will he be fully absorbed by the Land and dwell permanently in the presence of G-d. “Indeed, it shall be said of Tzion, ‘Every man was born there’” (Tehillim 87:5). This means that all who come to [a new level of] holiness must begin again, must be reborn and experience once again the tribulations of childhood, until he finally sees the Land face to face and his soul is bound up with its soul. (Pri HaAretz, Letters)

In moving to Israel, Rav Menachem Mendel gave up the royal clothing and external trappings of majesty that he had taken up in Europe, embracing the sufferings and difficulties of a pioneering life in the Land of Israel. He and his Chassidim lived with constant hope for the redemption and perceived all of their tribulations and difficulties as חֶבְלֵי מָשִׁיחַ, “birth pangs of the redemption.” 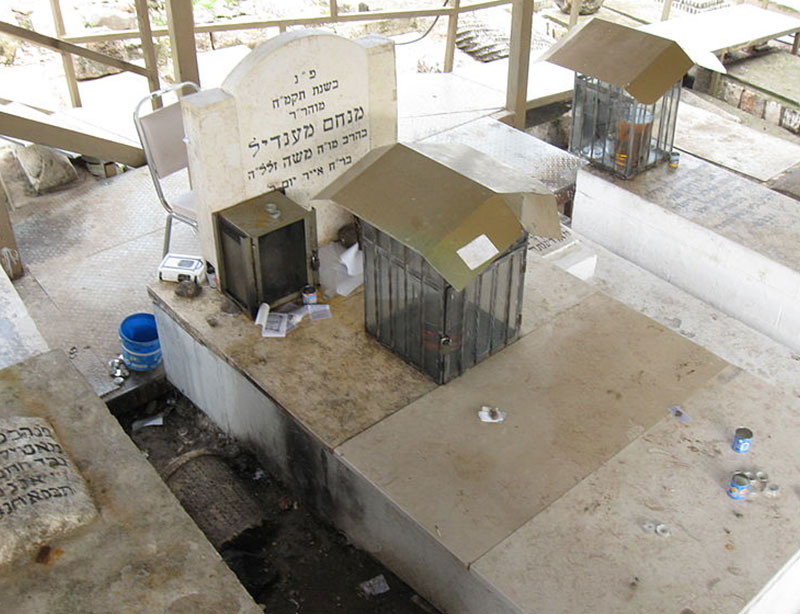 The Kever of Rav Menachem Mendel

One of the students of Rav Menachem Mendel recounted that when they still lived in White Russia, it was his job to bring fish to the home of Rav Menachem Mendel in honor of Shabbat. The Chassid said: “I would go to the bank of the river and say, in the name of my Rebbe: ‘Menachem Mendel needs fish for Shabbat!’, and large fish would immediately jump out of the river, straight into the open basket I had brought with me. When we moved to Israel, I planned to do the same thing. I walked to the banks of the Kinneret and called out ‘Menachem Mendel needs fish for Shabbat!’, but there was no answer. I repeated my call several times, until in the end, two small fish jumped into my basket. When I told Rav Menachem Mendel about what had happened, he explained: ‘Eretz Yisrael is not built through miracles.’”

Rav Menachem Mendel of Vitebsk taught us that the Land of Israel, then and now, is only acquired through struggles and suffering (Berachot 5a). If we forget his character and his deeds, it is not Rav Menachem Mendel who will lose out, but rather we who squander the opportunity to learn from him. Let us attach ourselves to the path of great and holy Jews like Rav Menachem Mendel and his students who yearned for the rocks and soil of Eretz Yisrael and whose souls were bound up with the soul of the land.

Rabbi Dudi Dudkevitz is the Rabbi of Yitzhar and the Rosh Yeshivah of Yeshivat Roeh Yisrael in Yitzhar.