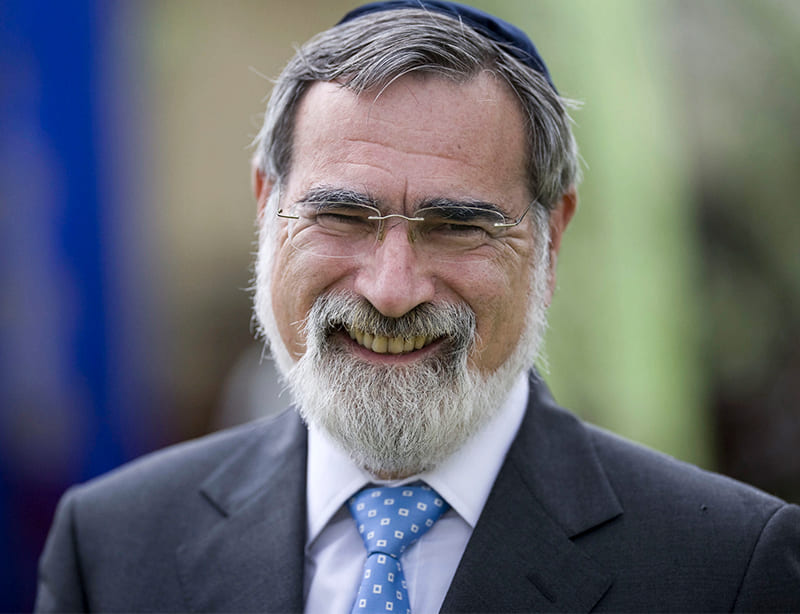 Chayei Sarah and the Legacy of Rabbi Sacks

Avraham succeeded. He faced daunting challenges and passed great tests culminating in Akeidat Yitzchak, where he showed the willingness to sacrifice his beloved son. But he is not done. In the wake of Sarah’s death, Avraham faces two more challenges: securing a foothold in the land and ensuring the continuity of his and Sarah’s legacy.

First, he endeavors to purchase a burial plot for Sarah. Hashem had promised the land to Avraham, and he had also conquered it in war. And yet despite his status as a great leader of the generation, the purchase of the Me’arat HaMachpelah was no easy task. Though willing to offer burial, the residents of Chevron seek to avoid selling Avraham land. Avraham must struggle and persevere to succeed.1

Both the challenge and Avraham’s efforts in response are precursors to the challenges the Jewish people have faced and the perseverance we have needed throughout the ages in realizing our rights to Eretz Yisrael. Though promised to us, Eretz Yisrael is secured only through yisurin2 – through sweat and tears. The challenges test our faith and ensure we appreciate the gift.

Avraham’s future was precarious. Sarah is barren, a painful reality that ultimately caused Avraham to question Hashem’s promises that his children would inherit Eretz Yisrael. Though Hashem promises Avraham that his children will be as numerous as the stars, Avraham’s path to realizing this promise was long and arduous.

Avraham marries his wife’s handmaid Hagar who conceives a child, but she flees after conflicting with Sarah. After Hagar returns and gives birth to Yishmael, Hashem informs Avraham that his future will only be realized through Yitzchak. Amazingly, Hashem then commands Avraham to cut off both of these children. Avraham is commanded to banish Yishmael from his home, and later to sacrifice his beloved Yitzchak to Hashem. Avraham’s tests begin with Lech Lecha, when he must abandon his past, and climax with the “sacrifice” of Yishmael and Yitzchak, when he must be willing to abandon his future. Avraham’s willingness to give everything to Hashem solidifies his legacy, a legacy Yitzchak will continue in the next generation.

As Avraham grapples with Sarah’s passing and his own mortality in Parashat Chayei Sarah, he works to ensure Yitzchak’s continuity. For Jews, death does not bring despair; it drives us to prepare those who will carry on our legacy for success. Sensing his own days are numbered and fearing that marriage to a daughter of Canaan will cause Yitzchak to turn astray,3 Avraham sends his servant to find a proper bride for his son.

Avraham’s experiences help us appreciate how challenging it can be to raise the next generation of committed Jews – a challenge we continue to struggle with today. Avraham’s tireless efforts to ensure continuity inspire us to invest our hearts and souls in educating our own children.

Rabbi Jonathan Sacks dedicated his life to both of these ideas: “A land: Israel. And children: Jewish continuity. The astonishing fact is that today, four thousand years later, they remain the dominant concern of Jews throughout the world – the safety and security of Israel as the Jewish home, and the future of the Jewish people. Avraham’s hopes and fears are ours.”4

In our generation, Jewish continuity faces the great danger of cultural assimilation. Though we have merited to see our people’s return to Eretz Yisrael, our relationship with and right to the land are constantly challenged by our enemies.5 Rabbi Sacks understood the modern manifestations of these ancient challenges and spoke, wrote, and acted to confront them.

Avraham taught us that death must not bring despair, but rather motivate us to strengthen our eternal values and pass them on to the next generation. May the passing of Rabbi Jonathan Sacks, who worked tirelessly on behalf of our people, inspire us to play our own part in ensuring the legacy of Am Yisrael.

5 Chazal anticipated that our rights to Eretz Yisrael would be challenged, predicting that we would even be accused of stealing places the Bible records our ancestors had purchased, like Me’arat HaMachpelah (Bereishit Rabbah 79:7).