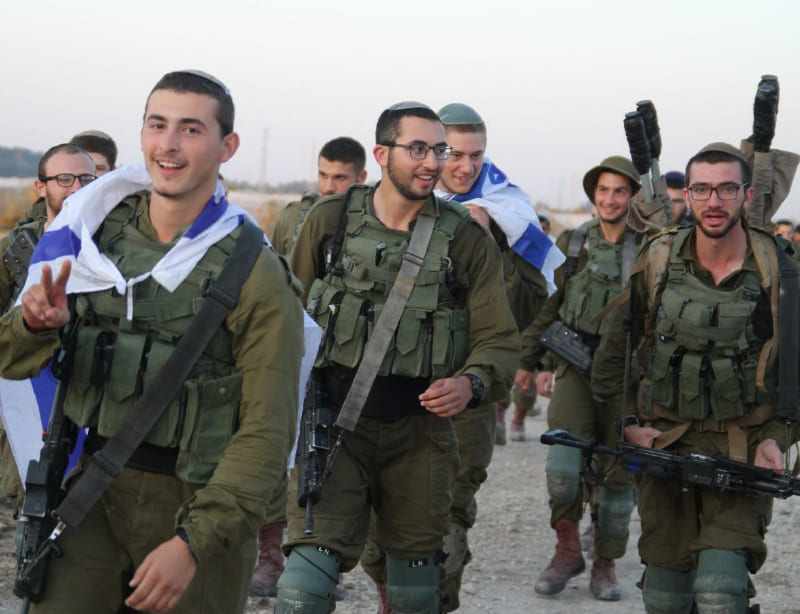 Gevurah in Our Day: From The Chashmona’im to the IDF

Sitting under the stars on the hard stone slab of an amphitheater, witnessing the swearing-in ceremony of newly minted Israeli tank soldiers, is a powerful experience. As a young Jew from the Diaspora attending the ceremony, I felt many emotions.

I was awed by the precision and professionalism of the officers and cadets. I was moved by the parents of these young soldiers, beaming with pride. I was also conscious of witnessing history, of experiencing firsthand a historic transition of the Jewish people. As a Jew, especially one still living in the Diaspora, I was attentive to what was playing out before my eyes – a new type of gevurah.

Gevurah, as Rabbi Joseph B. Soloveitchik zt”l explained in an address to a Mizrachi convention nearly 70 years ago, does not connote physical strength: “Gevurah signifies heroism. The hero is not the physically strong one, but the one possessed of the quality of heroism.”

For as long as our people could consciously remember, collective gevurah has meant one thing: The heroism of survival. Despite impossible odds, the Jewish people have done “the paradoxical, the absurd” in the words of the Rav: We have survived. We survived physically, despite being exiled, expelled and tormented. And we have survived spiritually, despite experiencing periods of loneliness and Divine hiddenness. Across centuries of oppression, our people collectively found the courage to cling to Hashem. As communities scattered across a vast Diaspora, we blessed Hashem each day, אוֹזֵר יִשְׂרָאֵל בִּגְבוּרָה, “Who girds Israel with strength.”

Individually, we have followed the strict interpretation of the Mishnah in Pirkei Avot (4:1): אֵיזֶהוּ גִּבּוֹר הַכּוֹבֵשׁ אֶת יִצְרוֹ, “who is a gibor? One who conquers his inclination.” Throughout our long history, we have lived in Christian, Muslim and secular cultures of every kind, subject to powerful cultural influences that threatened to pull us away from a life of Torah. On occasion, individuals have slipped into the tide of darkness, losing their grip on Hashem’s hand. Yet our people have overwhelmingly found the gevurah to uphold our inner spiritual and religious convictions, embracing Hashem with our choices, despite the ongoing moral chaos and confusion that has surrounded us.

Chanukah, however, reveals a different dimension of gevurah, a form of heroism from our distant historical past, “בַּיָּמִים הַהֵם,” which is re-emerging in our day, “בַּזְּמַן הַזֶּה.”  It is the gevurah of the Chashmona’im. The Chashmona’im were Jews who became heroes through their military initiative. Hashem blessed their physical efforts with success, and the Rambam highlights their political victory as the reason for our celebration of Chanukah today.

In the modern era we have witnessed this gevurah in the soldiers in the IDF.  A sparse group of courageous Jews formed this fighting force after the Holocaust and overcame impossible odds; with their improbable victory over six Arab nations, Hashem blessed them with the State of Israel. Today we witness this gevurah in young people who put their personal lives and aspirations on hold and dedicate years of their lives to national service, in chayalim who risk their lives by wearing a uniform that makes them a target of our enemies. Many thousands of these heroic young men and women have made the ultimate sacrifice, going up to the Akeidah of Yitzchak, the paradigm of gevurah, but not returning from their journey.

The IDF has revealed new dimensions of gevurah within our nation. The Ramban interprets gevurah as “overwhelming force” (Bereishit 7:18), a form of strength and power the Jewish people could only dream of during our long exile. But this form of gevurah is no longer a fantasy, and the IDF’s reputation as a great military force is a constant source of pride for our people.

Most importantly, the IDF’s purpose and guiding values express the deepest form of gevurah. It represents the collective will of the Jewish people to stand together in righteousness, to uphold our Divine values even in the height of battle.

The IDF’s mission dictates that “Soldiers of the IDF shall act according to the values of the IDF and its commands, while abiding by the law, upholding human dignity, and respecting the values of Israel as a Jewish and democratic state.” As Rav Avraham Yitzchak HaKohen Kook explained in his note on the daily אוֹזֵר יִשְׂרָאֵל בִּגְבוּרָה blessing: “This is the gevurah that is the bond of Israel, that is fitting for the ethically pure foundation and elevated value of a human being.”

The members of the Chashmonai clan, whose individual and collective gevurah we celebrate each Chanukah, are reborn in our own time through the holy and heroic soldiers of the IDF. Certainly, the legacy of the Chashmona’im is complicated, their efforts did not produce complete redemption and not every aspect of the IDF has achieved Rav Kook’s spiritual vision. Nonetheless, the Chashmona’im of old and the chayalim of today are bound together through their gevurah, their heroic willingness to fight on behalf of Hashem, His people and His land. For this we recite Al Hanissim.

When we sit at an Armored Corps swearing-in ceremony or see a proud young Jew crossing the street in uniform, defending the land of our fathers, we are witnessing a modern Chanukah miracle – but not an unexpected one. Long ago, the rabbis promised us that the gevurah of Chanukah would one day shine forth again among our people, בַּיָּמִים הַהֵם בַּזְּמַן הַזֶּה, “as it was in those days, so it will be again in our time.” שֶׁהֶחֱיָנוּ וְקִיְּמָנוּ וְהִגִּיעָנוּ לַזְּמַן הַזֶּה, Blessed are You Hashem, for the gift of seeing this promise fulfilled, before our eyes!

Rabbi Reuven Brand is the Rosh Kollel of the YU Torah MiTzion Kollel, a community Torah institution with a vibrant Beit Midrash, array of creative learning opportunities, unique women’s initiative and diverse outreach programming. He lives in Skokie, Illinois with his wife, Nechama, and their five children.