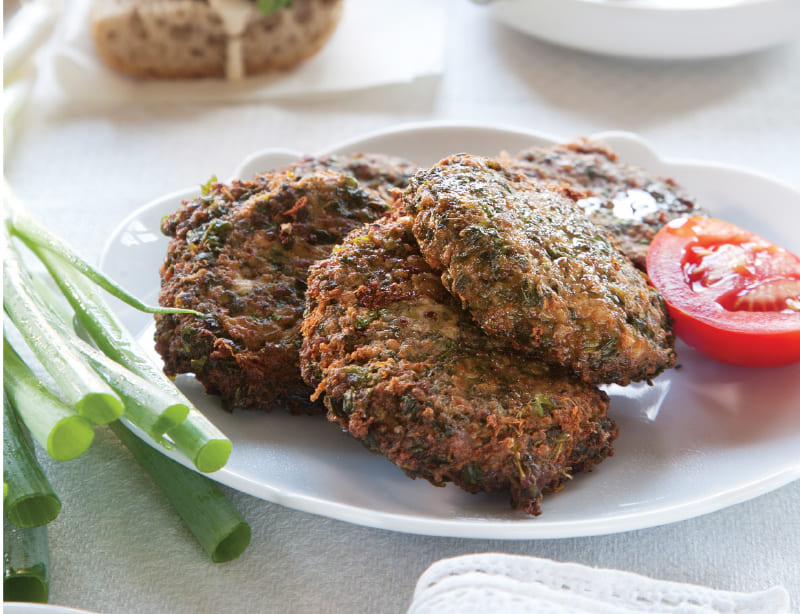 This delicacy hailing from Syrian Jewish cuisine is a wonderful alternative to the traditional Chanukah latkes, with a big plus: As opposed to the classic Ashkenazi potato latkes, ijeh can be made in advance and served at room temperature.

Called havitat yerek in Hebrew (literally “omelet with greens”), it is sold, stuffed in pitas, at many roadside eateries and falafel joints. But the real thing, which also contains ground meat, is found almost exclusively in Syrian Jewish homes. Delicious and so easy to make, this is one of my favorite lunch fixes. It is also great for sandwiches and picnics.

About 2 tablespoons matzo meal or breadcrumbs

Pita, bread rolls or a ciabatta

Put all the ingredients, except for the beef, pine nuts and oil, in a food processor. Pulse only until herbs are chopped. Be careful not to overwork, lest the herbs turn mushy. Transfer to a bowl.

Add ground beef and pine nuts (if using them) and mix thoroughly.

Heat a little bit of oil in a large non-stick frying pan. With a large spoon, ladle pancakes 7 cm (3 inches) wide and fry on medium heat for 3 to 4 minutes on each side, until deep golden. Be careful not to crowd the pan (work in batches).

Remove to paper towels to drain.

To serve: Brush pita, bread rolls or ciabatta with olive oil and toast in a hot pan or oven. Arrange the pancakes on the bread (it will absorb the flavorful juices) and top with onion, herbs, and tahini. If not serving immediately, store the pancakes in the refrigerator – they are delicious cold or at room temperature in a sandwich or as a light snack with freshly cut veggies and a dollop of tahini.

Variation (for a vegetarian option):

Skip the meat. Increase the amount of breadcrumbs or matzo meal to 5 tablespoons. You might also want to add 1 to 2 chopped and slowly sautéed onions for extra flavor.

Janna Gur was born in Riga, Latvia, and immigrated to Israel in 1974. She is the founder of Al Hashulchan, the premier Israeli food and wine magazine, which she edited for almost 30 years. She edited and developed nearly 40 Hebrew cookbooks, many of them national bestsellers. For the last decade, Gur has been touring and speaking extensively about Israeli and Jewish food in Israel and worldwide. She also hosted several culinary missions and led numerous food tours around Israel.