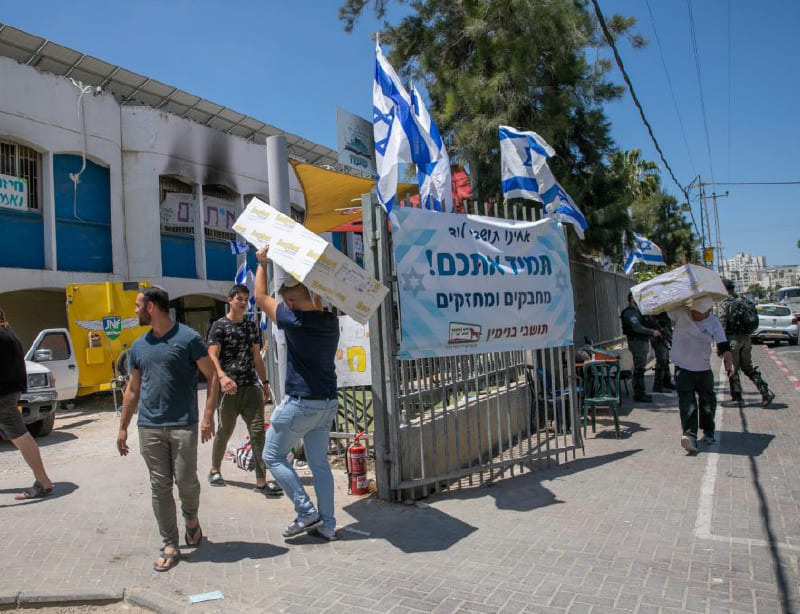 A heartwarming show of support for Lod’s Garin Torani during the riots. The sign from the residents of the Binyamin region reads: “To our brothers and sisters, the residents of Lod: We are always with you, embracing and strengthening you.” (Photo: Makor Rishon)

In the aftermath of the Arab riots in Lod, Ramle and other cities in Israel this past May, some critics have blamed Garinim Torani’im for the unrest, claiming that their Religious Zionist ideology undermined Arab-Israeli coexistence in these areas. In this article, a community lawyer serving disadvantaged regions in Israel and self-described left-wing activist, defends the Garinim Torani’im.

I arrived in Lod in the 90s as a legal volunteer for the National Council for the Child. Although I too had grown up in a blighted no-man’s-land, and although poverty, hardship, and drugs were an integral part of the circumstances in which we had lived, I was stunned. We felt as though we had entered a wasteland even more threatening than that in which we had grown up. This feeling only intensified when we failed at our mission. A few years later, when we attempted to establish a Yadid rights center in the city, we discovered that it was a tougher location than the other marginal communities where we had established centers. It was more abject than Lakiya and Ofakim in the south and more complex than Kiryat Shemona and Tuba-Zangariya in the north. We did not succeed, and there came a time when we simply gave up, even though the locals were crying out for help and we had no lack of funds.

I was therefore surprised when I learned of the successes of the Garin Torani in Lod over the past fifteen years. Thanks to them and others like them, entire regions have improved, housing projects where no one wanted to live have filled up and even started waiting lists, and contrary to the false claims, their educational and social projects are not for “Jews only,” but for all the people of the city, or at least this was the case with the projects in which I had a (small) role in my various positions.

True, it was difficult to miss the fact that the organizers affiliate with a particular denomination, but this was only one more reason to applaud their work with both my Zionist left hands enthusiastically. After all, for the past fifty years, we have been calling on precisely these people, with the fluttering tzitziyot, towering headscarves, and Shoresh sandals, to leave the territories that don’t belong to us and come back to live inside the country and here they are doing just what we asked. Not only that, but they are doing it in places where we have heard numerous requests for help from those who suffer most from the listlessness and nonperformance of our government and ourselves, the civic organizations.

In my naïveté, I thought everyone agreed with me. Yet then came Operation Guardian of the Walls. From the fires that burned in the streets of Lod, an accusing finger was pointed at the Garinim Torani’im, claiming that they had marginalized the Arab population, caused the rise in housing costs, and provocatively flaunted their presence as they haughtily worked to “Judaize the area.” The fact that the Garinim enjoy generous public funding only hastened their indictment over the bloody events.

The need for such a narrative is clear. All of us need an explanation to restore calm when our routine is disrupted. If the fire that devoured the walls of our home broke out because of people on whom we have some influence, that alleviates the anxiety and makes coping easier. If the Garinim Torani’im are to blame, we’ll simply remove them, and coexistence will again blossom amid the smoldering cars. Yet if that were the explanation, then there should have been a far greater conflagration in Jaffa.

There, the disparities between the Jewish newcomers, who live in well-guarded upscale buildings, and the original residents in their dilapidated neighborhoods, are immeasurably more significant. Not only have synagogues and mikva’ot appeared there, but so have army bases, including consummate symbols of the Jewish state (foremost among them the military court and the army’s broadcast station). And yet, Jaffa remained quiet while Lod erupted in riots.

When that narrative failed to take hold, they started blaring their arguments about how the Garin Torani had taken over public housing at the expense of the truly disadvantaged.

Having worked on public housing for the past thirty years, I have encountered such cases in several places in the country, but the numbers have been quite negligible. For our present purpose, what is important is that this did not happen in Lod. On the contrary, there always has been vacant public housing for the disadvantaged in Lod, but they declined for obvious reasons. Who wants to live in a place without a future, from which everybody who was born there escapes if he can?

The truth must be told: The Garinim Torani’im in general, and in Lod in particular, have succeeded where we failed, in part because they, unlike us, came to stay in a place lacking infrastructure while we returned in the evenings to the comforts of our remote homes. Their success in Lod is a realization of Zionism in its entirety, in the sense that they bring a blessing to the land and all its inhabitants, Arabs included. It would appear that this also is the true reason for the denunciations and the hatred now directed against them.

● This essay was originally published in Hebrew in Makor Rishon.

Professor Yuval Elbashan is an Israeli lawyer and social activist. He co-founded and was deputy director of Yedid, a network of citizens’ rights centers in underprivileged neighborhoods.