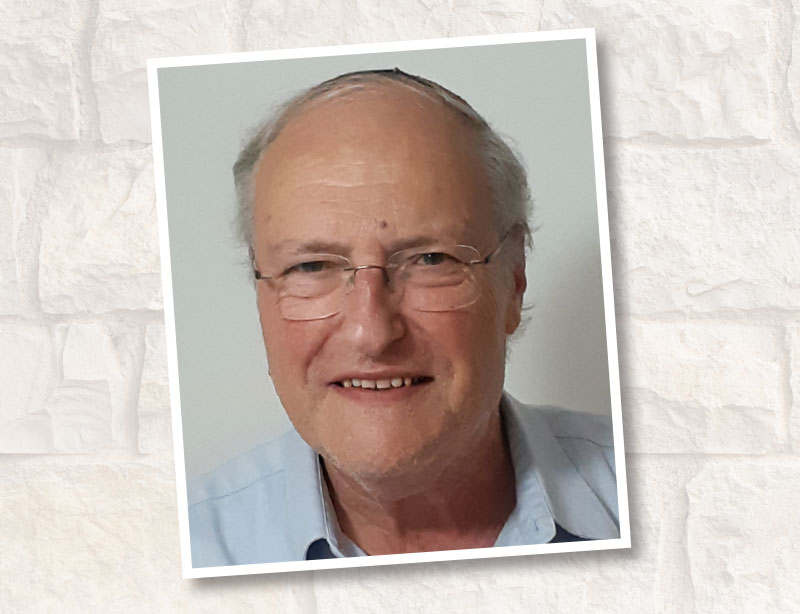 An occasional series of interviews with notable veteran or more recent olim who have chosen to make their homes in Jerusalem.

Dr. Efraim Zuroff is director of the Israel office and chief Nazi hunter of the Simon Wiesenthal Center, which is based in Los Angeles. He has dedicated his life to tracking down and bringing Nazi war criminals and their collaborators to trial. The author of four books, which have been translated into 15 languages, he is an imposing, warm and vibrant man with an extraordinary memory for names, numbers, dates, facts, places and, of course, history.

Surely no one grows up thinking “I’m going to be a Nazi hunter”. What else might have you become?

I was always tall, so as a kid my fantasy was to be the first Orthodox Jewish professional basketball player. I was on the teams both in high school and in college, but I wasn’t anywhere near good enough, nor could I have remained frum if I had tried to follow my dream. But basketball is still a passion of mine, and I’m a fan and go to Hapoel Yerushalayim games.

We’re a Yeshiva University family. My father, Dr. Abraham Zuroff, was a YU musmach and the principal of the YU high school for boys in Brooklyn for 30 years, and supervisor of all the YU high schools. My mother, Esther, was director of student services at Stern College. My maternal grandfather, Dr. Samuel L. Sar, who was dean of men at YU, was also one of the leaders of Religious Zionism in America, and head of the Va’ad Hapo’el of American Mizrachi.

Were there any survivors of the Shoah in your family?

Neither my parents nor my grandparents were Holocaust survivors. I tell you point blank that if they had been survivors, there is no way I could do what I’m doing, because it would be too emotional, way too emotional. I am, however, named for my grandfather’s brother who was murdered in Lithuania, together with his wife and two sons.

Did you always want to make Aliyah?

I’m from the generation of 1967. At the outbreak of the Six Day War, I remember seeing a chart in a newspaper comparing the strengths of the Israel army and the Arab armies, and I said to myself, “There’s going to be another Shoah!” I was wrong of course, and instead it was a great victory. So in 1968, I came to spend a year at Hebrew University and I determined then that I was going to make Aliyah and nothing was going to stop me.

What was your plan when you came here ?

Originally, I was on the path to become an academic. I did a master’s degree in contemporary Jewry at Hebrew University, with the Shoah as my field of specialization. I eventually completed my doctorate on the activities of the Vaad HaHatzalah rescue committee during World War II, which was published in 2000 as The Response of Orthodox Jewry in the United States to the Holocaust. But I decided that I was more interested in making history than in writing it.

How did you come to start working for the Wiesenthal Center?

In 1978, I was invited to become the first director of the Simon Wiesenthal Center in Los Angeles, and I spent two years there. I returned to Israel in 1980 and worked here for the United States Office of Special Investigations for six years. I began to develop the tools with which I could identify the escape paths of thousands of Nazi war criminals, but at that time the only country that was taking any legal action against these Nazis was the USA. Yet we knew that many were living free, not only in South America, but in several other democratic countries. I approached Rabbi Marvin Hier, the founder and dean of the Wiesenthal Center, and told him that I could flood those countries with the names of so many suspects living in their midst that they would not be able to walk away from the issue. We did just that, and I’m proud to say that Canada in 1987, Australia in 1989 and the United Kingdom in 1991 all passed laws to enable the prosecution of Nazis who had entered their countries illegally.

Most people probably think of you as a sort of James Bond character with all kinds of exciting adventures.

You said before that no one grows up thinking that they’re going to be a Nazi hunter. But you have no idea how often people come up to me and say, “You have my dream job!” And they want to volunteer, thinking that I’m going to send them off to some exotic place with a big budget to go look for who knows what. But that’s not the way it works. Although I do spend a lot of time traveling around the world, it’s almost all careful and protracted research, devoting years to following a trail, helping the authorities build a case, and searching for survivors who can testify in court.

Tell us about one of your major cases.

One day I got an email from a gentleman in Scotland, a non-Jew who had a Hungarian girlfriend, and who participated with her in some social gatherings of Hungarians. He wanted me to know that he had met an older man there who used to brag that he helped deport Jews to Auschwitz. With the assistance of a journalist from the Glasgow Herald, I discovered that this man was still in touch with his former superior officer, Sandor Kepiro, a major Hungarian war criminal who was involved in the massacre of Jewish, Serb and Roma residents of the city of Novi Sad in January 1942. He initially escaped to Argentina but returned to Budapest in 1996, thinking he was safe. In 2006, when I learned that he was still alive, I went to Budapest and with the help of some local investigators I found that he was living quite openly, ironically right across the street from a shul. What a view for a Nazi mass murderer! It took five years to get him into court, but in the end, to my great dismay, he was released by the Hungarian court on a very questionable technicality. Meanwhile, he had sued me for libel for labelling him as a Nazi, which he, of course, denied. If I had lost the case I might have been sentenced to two years in jail. What could have been more ironic? That I would sit in a Hungarian jail while this war criminal would walk free!

How do you feel when a Nazi whose case you’ve worked on is brought to trial?

I don’t feel any sense of relief, if that’s what you mean, until the person is convicted and punished. But in Germany, for example, as long as the defendant’s appeal has not been heard, they don’t go to jail. In a well-known case, Ivan Demjanjuk was eventually convicted of being an accessory to the murder of 28,000 people at the Sobibor death camp. He was sentenced to five years, but wasn’t jailed, unfortunately, because he died before his appeal was concluded. I always joke that I’m the only Jew in the world who prays for the good health of Nazis – at least the ones who can be brought to justice.

There are so many who have avoided justice…

Look, there are many great obstacles to securing a conviction. Most countries just don’t want to prosecute, so I have to console myself with even partial victories. I made myself a scale of achievement: 1) the person is publicly exposed; 2) a government starts an official investigation; 3) there’s an indictment; 4) the person stands trial; 5) they are convicted; and 6) they go to prison before they die.

Your achievements speak for themselves, but on a personal note, how has your work impacted your personality?

I have never allowed what I do to ruin my life and I’ve never turned this quest into a personal obsession. I am at heart a historian of the Shoah, and my books testify to that. I remain committed to making sure that the Shoah will neither be forgotten, nor ignored, nor denied, nor distorted, and that those countries which still today deny their involvement and their collaboration will not be left in peace.

David Olivestone is an award-winning writer who served on the staffs of the British Museum and of the Encyclopaedia Judaica. He was Director of Communications at the Orthodox Union in New York before making Aliyah to Jerusalem with his wife Ceil in 2013.