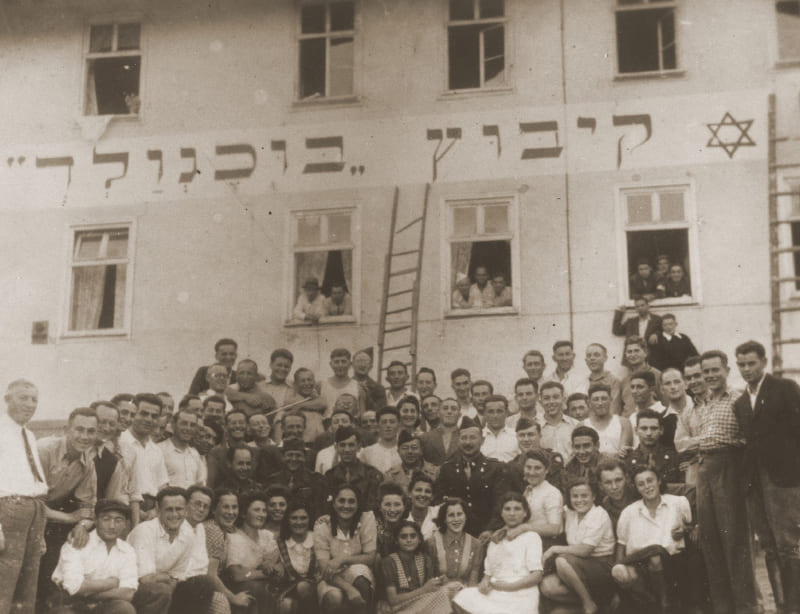 “How different it is from the holiday at Buchenwald!” a Holocaust survivor marveled at the Chanukah celebrations in Kibbutz Afikim, in the Jordan Valley, in 1945. “Rows of free people, marching in a procession… standing erect… An armed Hebrew watchman makes his rounds, protecting and guarding us… At the top of the tower, a comforting fire glows, spreading light and faith…” However, this survivor and his friends were not entirely strangers to kibbutz life because they had recently taken part in a remarkable hachshara project in postwar Germany called “Kibbutz Buchenwald.” The story of Kibbutz Buchenwald involves a group of stubbornly idealistic young Holocaust survivors, a feisty American military chaplain, and an interesting connection to the history of the Religious Zionist movement.

The chaplain was Herschel Schacter, an Orthodox rabbi from Brooklyn and future president of the Religious Zionists of America (Mizrachi USA). Schacter’s unit liberated Buchenwald in April 1945, and he chose to remain in the camp for more than two months, counseling and assisting the survivors.

Rabbi Schacter was approached by a group of young survivors who sought his help to obtain a tract of land in the vicinity. Some had been members of the Mizrachi youth movement HaShomer HaDati or other Zionist youth groups, and they were anxious to resume training for their future lives in Eretz Yisrael.

What happened next was described by Schacter in the pages of HaMigdal, the magazine of HaShomer HaDati’s U.S. wing. Here, from the pen of an American rabbi, came an inspiring story of hope among the ruins.

Schacter explained to his American readers how U.S. military officials agreed to requisition a farm at Geringshof, 100 miles southwest of Buchenwald, where a pre-war hachshara group had once labored. Soon after the “kibbutzniks” arrived, they came across torn pages from a Torah scroll, which they gathered and buried. On the rear wall of a shack, they discovered that someone had written the words “We Will Yet Return” – the final pledge of the previous residents, members of Bachad, a Religious Zionist youth movement.

“There is a remarkable element of historic justice in this fact,” Schacter wrote. “For on the very site where there had been a kibbutz in pre-Hitler days there was now another kibbutz of those very Jews whom Hitler sought to destroy. They were again building the ideal of Zionism and of a new Jewish life which the Nazis attempted to annihilate.”

Rabbi Schacter titled his essay “A Message from the Chalutzim of Kibbutz Buchenwald to the Chalutzim of HaShomer HaDati.” He understood that he was addressing an audience of potential olim, and so he emphasized themes of Zionist pioneering, idealism, and triumph over tragedy.

“I will never forget the afternoon when we celebrated the Chanukat Habayit of this, the first hachshara in Germany after the destruction of Nazism,” he wrote. “The inspired songs and animated Horas which these people had not sung or danced for so many tragic years reverberated, I am sure, for miles around. A huge Zionist flag was hoisted on a long flag-pole over the roof of the farmhouse.”

“Of course, their songs were mingled with sorrow and their smiling faces were dampened by the bitterness of their tears,” Rabbi Schacter continued. “For how could they forget the overwhelming losses that they had sustained?… Not one had a father or mother. No one knew of sisters or brothers. They were completely alone, bereft of their dearest relatives and any possessions that they may have had.”

But the final chapter had not yet been written. He emphasized: “In the midst of the sorrow and pain and tears, one ideal sustained them, one hope gave them indomitable faith. They were chalutzim and now they are chalutzim again. The tragic interruption notwithstanding, they are taking up where they left off. They can see a ray of light again piercing the black and foreboding clouds of despair. They see again the road; hard and long as it may be, they are nevertheless again on the road to Eretz Yisrael.”

Avraham Gottlieb, one of the core group who founded Kibbutz Buchenwald, wrote with admiration at Rabbi Schacter’s approach in his visits to the farm and his counsel to its members. Gottlieb was struck by the fact that instead of attempting to pressure the young people to observe Jewish religious tenets, the rabbi urged them to “not allow ideology to divide them, as it had before the war, but instead become one band with a place for each individual with a declared wish to live as a Jew among Jews.” (Gottlieb’s account is found in the 1997 book Kibbutz Buchenwald: Survivors and Pioneers, by Judith Tydor Baumel.) The kitchen at Kibbutz Buchenwald was kept kosher, and Shabbat was treated as an official day of rest, thus enabling the Orthodox minority to feel their wishes were being respected.

Schacter concluded: “The message these heroic chaverim asked me to bring to our chaverim in America is one which should stir our hearts and inspire our minds. When I told them of the various chalutziut movements in America, they were thrilled… They are in desperate need not merely of our financial and political assistance, but even more, are they clamoring for CHALUTZIM FROM AMERICA. We must prove to them, to the rest of the tragic remnants of our people and to all the world, that we, the Jewish Youth of America, stand with our chaverim who are still in the throes of the Galut of Europe and share with them a common hope for the establishment of a Jewish state. Our solidarity must be stronger than ever before. We must join with them in building the hope of the Jewish people – a free democratic Jewish Commonwealth.”

The first group of Kibbutz Buchenwald members reached Palestine in September 1945, eventually joining a group of chalutzim who established a new settlement in central Israel called Kibbutz Buchenwald. After a few years, the association of kibbutzim to which Kibbutz Buchenwald belonged urged a change of the name, both because of the trend in Israel to Hebraicize “foreign” names and the jarring sound of an Israeli town bearing the name of a Nazi concentration camp. The new name that the kibbutz members chose, however, was still linked inextricably to Europe – they wanted to honor Enzo Sereni, one of the Palestine Jewish parachutists who gave their lives trying to aid the Jews in Europe. The Labor government’s “National Names Committee” initially resisted, but the committee relented after a lively public debate.

“Netzer Sereni” remains to this day a living reminder of the kibbutz that arose from the ashes of Buchenwald and the state that emerged from the ashes of history to become – as Rabbi Schacter so memorably put it – “the hope of the Jewish people.”

Dr. Rafael Medoff is founding director of The David S. Wyman Institute for Holocaust Studies and author of more than 20 books about Jewish history, Zionism, and the Holocaust, including The Rabbi of Buchenwald: The Life and Times of Herschel Schacter (Yeshiva University Press, 2021).