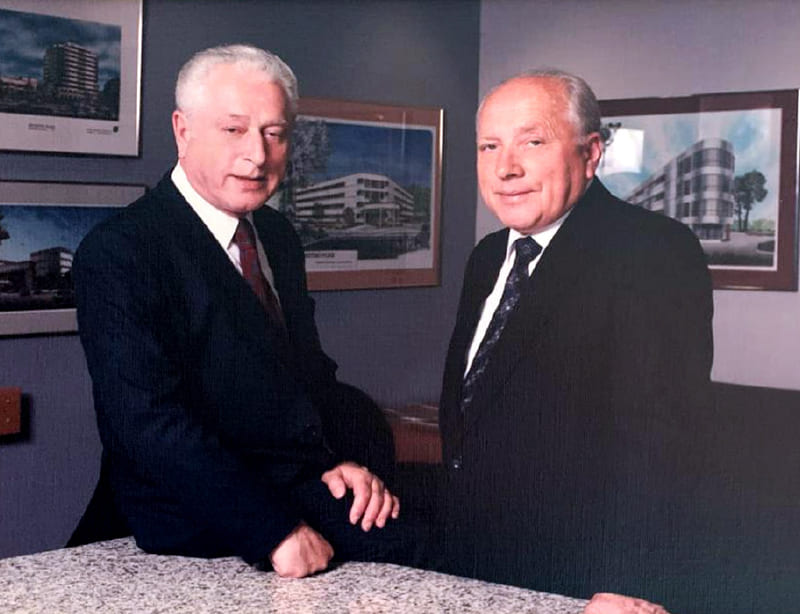 Reflecting on the Extraordinary Story of Sam and Arie Halpern

Sam and Arie Halpern z”l were two of the most impactful American Jews of the post-Holocaust era. Born to a Chassidic family in Chorostkov on the Polish-Ukrainian border, the brothers lost their parents, brother and most of their family and friends in the Holocaust. Surviving ghettos, concentration camps and many months in hiding, Sam and Arie arrived in the United States in 1949, where together they built a series of successful businesses, developing homes, apartments and commercial property.

Together with Sam’s wife Gladys and Arie’s first wife Frieda and his second wife Eva, the Halperns became philanthropic leaders in the Jewish community, supporting both local Torah institutions in New Jersey and an array of organizations in support of the State of Israel. Arie served as an Honorary President of the Religious Zionists of America.

Tell us a little about Arie and Sam’s extraordinary story of survival and rebirth. How did their experiences in the Holocaust shape their lives in America?

After the Shoah, in which so many of their family members and friends were murdered, they were trying to figure out where to go. When they went back to their hometown, they realized it was judenrein (free of Jews); they couldn’t go back there anymore. They went to a Polish border town and ultimately to the American Zone in Germany, where they started a business and began to get their lives back on track. When the State of Israel was established, Frieda’s family moved to Israel, and Sam and Arie wanted to follow. But the relatives in Israel sent word that things were very difficult in Israel because of the War of Independence, and that they should go to America instead and come to Israel later on. Sam and Arie had an uncle in America, Paul Wolfson, who sponsored their immigration.

With the money they had made in Germany, Arie and Sam were able to buy a little grocery store in Manhattan, near City College. They worked very hard and eventually bought a few more grocery stores. Eventually, through a friend in shul, they heard about another business called “building houses in New Jersey,” in which you didn’t have to work on Shabbat. They really hated having to work on Shabbat, and this was a great opportunity. They tried it for a year and saw that it was good, and so we all moved to Elizabeth, New Jersey, where Rabbi Pinchas Teitz had established a strong Jewish community with a yeshivah and a shul.

When they came to America and rebuilt their lives, they rebuilt the Jewish lives as well. They dedicated themselves to all the things they had learned in Poland. Our grandfather was a chassid; when our fathers were young, they had peyot. As they got older they became more modern, but they carried Judaism with them their entire lives.

Growing up, they were Zionists as well. They had a brother, Avraham Chaim, who before the Holocaust was on hachshara, planning to immigrate to Palestine; he did all the paperwork to get a visa, raised the money for the ticket and had a permit to go. But then the Jewish Agency told him, “Sorry, you have to give up your permit because the Jews of Germany are in greater danger than the Jews of Poland.” And so Avraham Chaim’s permit went to a German Jew, and he was stuck in Poland. He was then drafted into the Polish army and was killed in the battle of Chelm when the Nazis attacked in September 1939. Our fathers never forgot that. It drove them to join and be involved in every Jewish organization they could for the rest of their lives.

How has the Religious Zionist community in Israel changed in the decades since your grandfather passed away?

We could talk about this question for hours! Thank G-d, there have been good changes, foremost among them the growth of the Torah community. But there are also many new challenges among Religious Zionist youth, including those who study in religious institutions. It’s not certain that many of these young people will succeed in preserving their faith when confronted by the powerful currents of a secular society disconnected from holiness. Thank G-d, our country is strong, both economically and militarily. But on a spiritual level, the high percentage of young people removing their kippot is very concerning. Regarding olim specifically, sometimes children feel that the most important mitzvah is to become “Israeli,” which may come at the expense of being “Jewish.”

Today, as the State of Israel flourishes with newfound prosperity, we must continue to light a holy fire for Judaism so that people not only continue to observe Torah and mitzvot but do so with passion and excitement. My grandfather was very connected to the Rebbe of Piaseczna, Rabbi Kalonymus Kalman Shapira hy”d, who wrote that there is no extraordinary wisdom in seeing how good things are in the yeshivot. Instead, we must pay attention to what is happening in the streets, where much work is to be done.

We don’t typically associate Chassidic thought with Zionism. How did brothers from a Chassidic background become essential leaders of the Religious Zionists of America and Israel Bonds?

They were teenagers when they joined the Noar Tzioni (Youth Zionists) and hid their peyot. Part of it was a teenage rebellion, but it was also the spirit of the times; most of the young people in Chorostkov were going in that direction. Like today, the younger people didn’t accept the more conservative approach of their parents. They didn’t want to be passive victims anymore. As they became more independent of their parents, the Zionist idea became part of their core identity. They would wait each week for Zionist pamphlets to arrive in their shtetl! And also, there were girls in the Zionist movement. That was definitely part of it too!

After the Shoah, Arie and Sam, like other survivors, understood the importance of the State of Israel, much more than people who grew up in America or in other places where Jews felt safe. They appreciated Israel the way a person who has been starving for years appreciates a piece of bread.

Sam said many times that they went to the first Israel Bond appeal in 1953, and together they bought a $100 Israel Bond. They were so proud and excited that they had invested in the State of Israel, something their parents and grandparents couldn’t even dream of doing. One of the most significant moments in our childhood was when we went to the 10th-anniversary celebration of the State of Israel at the Polo Grounds. There were 50,000 people there, most of them Holocaust survivors, and everybody was singing Hatikva and crying simultaneously. That generation understood the miracle of Israel in a way that we simply cannot. They witnessed the fulfillment of their dreams. We still have some of that passion, but it’s often taken for granted with the next generation.

Over the many decades of their work on behalf of Israel, Sam and Arie met and worked together with many of the greatest Jewish leaders of the era. Can you share some memories of those times?

Our fathers idolized Ben-Gurion; there were pictures of him all over our houses. But the truth is, they loved every Prime Minister of Israel.

In the 1980s and 90s, Israel Bonds had an annual Elie Wiesel Holocaust Remembrance Award dinner. At the first dinner, they honored Elie Wiesel himself, and I remember when he came in from Boston and slept over at my parents’ house because my father would not hear of him staying in a hotel. They developed a very close friendship.

We once went with our father (Arie) to Har Herzl, where many of the most important leaders in Israeli history are buried, people like Yitzchak Rabin and others. He stopped at each one of their graves and talked to them! It was very emotional for him, for a little boy from the shtetl to meet these important leaders of the state.

How did Sam and Arie’s dedication to the thriving of the State of Israel trickle down to your generation and your own children? On Tu BiShvat, we plant seeds. Your parents planted so many seeds, and it’s our responsibility to water and nurture those seeds.

What’s the key to inspiring the next generation with a love for and dedication to the Jewish people?

Preaching doesn’t work very well with children; the best way to teach is to educate by example. Our parents were constantly involved in Jewish organizations like Israel Bonds and Mizrachi and their shuls and schools. They taught us by doing, and that’s how our children and we became involved. That’s the key to raising children. You show, you do, you role-model, and then you pray!

When our fathers spoke about their experience in the Holocaust, they never focused on victimhood. It was a story of survival – Arie would say that G-d saved them, pushing them to the left when everyone who went to the right was killed – and looking forward. Our mother (Frieda) died when we were pretty young, and he taught us then how to look forward.

Their communal activities, supporting Jewish institutions, remembrance and Israel Bonds, are important in their legacy. But there is also what they taught us about how to live personally. They spoke a lot about the dignity of hard work, which they learned from our grandparents, who were poor but worked incredibly hard to make a living. They taught us that you cannot only help yourself; you must also help others who have less than you. And they taught us to appreciate the people that support us. They really appreciated their rescuers who helped them during the Holocaust and sought to help them later on when they were able to.

They believed sincerely in the unity of the Jewish people. Many people today are on the far left or the far right. But they supported Israel, Chassidic causes, secular Jewish causes – they didn’t think they had to take one side or the other. They believed that peace is the most important thing – peace among family and peace among our people. The Jewish people have to stay together.