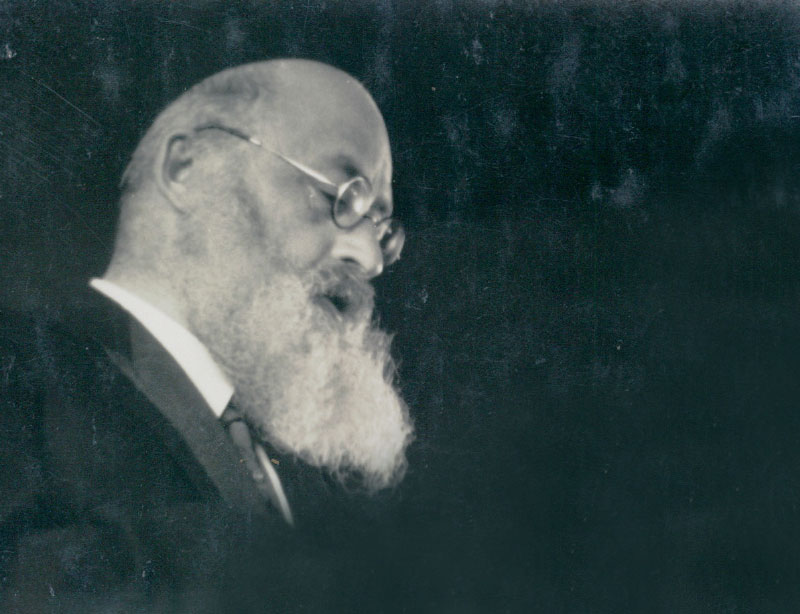 One of the first rabbis to join the Mizrachi movement, Rabbi Moshe Avigdor Amiel (1882–1945) was one of the great writers and public preachers of his time, whose oratorical skills could move even the most hardened hearts. In 1920, he was elected as one of the delegates to represent Mizrachi of Poland at the Mizrachi World Convention in Amsterdam. He made such an impression upon the Jewish community that he was soon appointed Rabbi of Antwerp, one of the largest and richest Jewish communities at the time.

In 1936, Rabbi Amiel made Aliyah in order to serve as Chief Rabbi of Tel Aviv, the largest Jewish community in the Yishuv, where he worked to improve relations between the religious and secular segments of the community. As Chief Rabbi, Rabbi Amiel founded Yeshiva HaYishuv HaChadash, a yeshiva high school which combined religious and secular studies. This yeshivah, later named in Rabbi Amiel’s memory, was used as the model for the Bnei Akiva high schools later established throughout Israel.

One of Mizrachi’s most penetrating thinkers, Rabbi Amiel was troubled by the often contentious relationship between Mizrachi and Agudat Yisrael, founded in 1912 to strengthen Orthodox institutions in opposition to the Zionist movement and Mizrachi. In this powerful 1934 essay, Rabbi Amiel senses the impending destruction of European Jewry and calls upon Mizrachi and Agudat Yisrael to find common ground in a spirit of brotherhood. Though written 88 years ago, Rabbi Amiel’s essay continues to resonate in our time.

Anyone who desires to speak the truth is forced to admit that we at Mizrachi, with our limited strength, will not accomplish very much if we act alone. If we wish to avoid the fate of יִרְעֶה עַד שֶׁיִּסְתָּאֵב (an animal that becomes unfit for a sacrifice and is sent out to pasture until it dies [Mishnah Temurah 3:3]), we must seek out partners to assist us in our holy work – whether we want to or not.

Many people from our camp mistakenly believe that Mizrachi was established primarily to battle against the Agudah; that this milchemet mitzvah (obligatory war) is not merely a means to an end but rather an end in itself and the central purpose of Mizrachi’s existence. I know it is true that there are many groups within Agudat Yisrael who feel that the entire purpose of the Agudah is to battle against Mizrachi, but one wrong does not justify another.

Though Mizrachi and the Agudah disagree on several matters, both parties fly the flag of Torah and the spirit of Torah. Unfortunately, the relations between them are not at all in the spirit of Torah, whose “ways are ways of pleasantness and all her paths are peace” (Mishlei 3:17), nor do these battles add to the glory of Torah. The battle with the Agudah is not a milchemet mitzvah, nor is it even a milchemet reshut (optional war)! The fighting between us brings destruction to the entire Torah world, degrading the glory of Torah and our community and thereby strengthening those on the left who oppose us and laugh as we fight amongst ourselves.

Did we at Mizrachi not publicize, soon after our founding, the following platform: “The purpose of our association is to draw close and not to distance, to build and not to destroy, to walk in ways of pleasantness and peace, to respect the honor of our opponents and to make peace among the various parties.” Did we intend for these words to guide only our relationship with those on the left? Was our intention regarding Agudat Yisrael to distance and not to draw close, to reject even those views of theirs that are correct and to judge them always unfavorably? Is there really nothing positive that we can learn from the Agudah?

On the other hand, does Agudat Yisrael not see that in the new Yishuv of Eretz Yisrael, Mizrachi alone bears the burden of battling for the glory of Torah against our [internal] enemies, “those who ravaged and ruined you who come from you” (Yishayahu 49:17), who wish to uproot the Torah from Israel? How can the Agudah watch all this from afar and sit on its hands, content with doing nothing? Has the Agudah given notice that it cares not for what happens in the broader Jewish community of Israel? The Agudah restricts its focus to Poland, but if, G-d forbid, Eretz Yisrael is built according to the spirit of the secular camp that seeks to uproot Torah, will this not detrimentally impact the Jews of Poland? Ultimately, Eretz Yisrael will become the center of worldwide Jewry, and if Eretz Yisrael is not ours, what will become of the exile?

If Eretz Yisrael is built in the spirit of Torah it will be the greatest possible sanctification of G-d’s name. And if, G-d forbid, it is built in the spirit of idolatry, it will be the greatest desecration of G-d’s name since the destruction of the Beit HaMikdash. Does the responsibility for the future of Eretz Yisrael not fall upon all of the faithful believers of Israel?

“We toil and they toil, we awaken early and they awaken early…” (Berachot 28b). Mustn’t we learn from those on the secular left who used to be divided into different groups like Tze’irei Tziyon and Poalei Tziyon, but for the good of the movement gave up their unique names and united to become one federation of workers for the Land of Israel? Why are only the Torah Jews torn into different factions that cannot work together? Why can’t we join together to form a federation to build a holy Eretz Yisrael? We do not have to combine into one organization in order to work closely together! 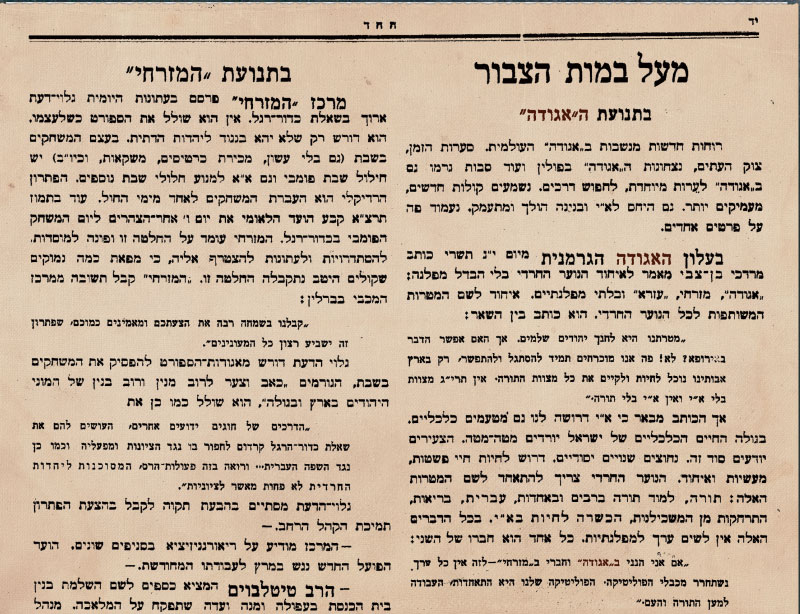 A section in “Hahed” newspaper (December 1932 edition) covering Mizrachi and Agudah news. Hahed was published in Eretz Yisrael between 1926 and 1952, and tried to encourage a Zionist spirit among Charedi Jews.

“The two masters said: Come, let us marry these two slaves to one another and divide the children born to them between us, as they will certainly be very beautiful. They secluded them in a room. The young man sat in one corner and the young woman sat in the other corner. He said: ‘I am a priest and the descendant of High Priests. Shall I marry a female slave?’ And she said: ‘I am the daughter of a priest and the descendant of High Priests. Shall I be married to a male slave?’ And they wept all through the night. When dawn arrived they recognized each other and fell on each other and wept until their souls departed. And with regard to them, Yirmiyahu lamented: ‘For these things I weep; my eye, my eye runs down with water, for my comforter is far from me’ (Eicha 1:16).”

How painful is this story! A brother and sister, both suffering and both the children of the same father and mother, find themselves together in a room. But instead of working together to find a way to escape from their suffering, “this one sat in one corner and that one sat in the other corner,” each one taking pride in their own yichus (genealogy) and demeaning the other. Ultimately they recognize each other, but only after it is too late to escape. The only thing left for them is to weep together until “their souls departed.”

Mizrachi and Agudat Yisrael, the two halves of the religious community in our time, are threatened with destruction by both our external enemies and the evil winds that blow within our own nation. But instead of working together to ensure the Torah is not forgotten among the people of Israel, G-d forbid, each camp sits in its own corner, insulting and degrading the other. I fear that when the time comes and we finally recognize that we are brothers, there won’t be anything left to save.

With regard to them, Yirmiyahu lamented: “For these things I weep…”