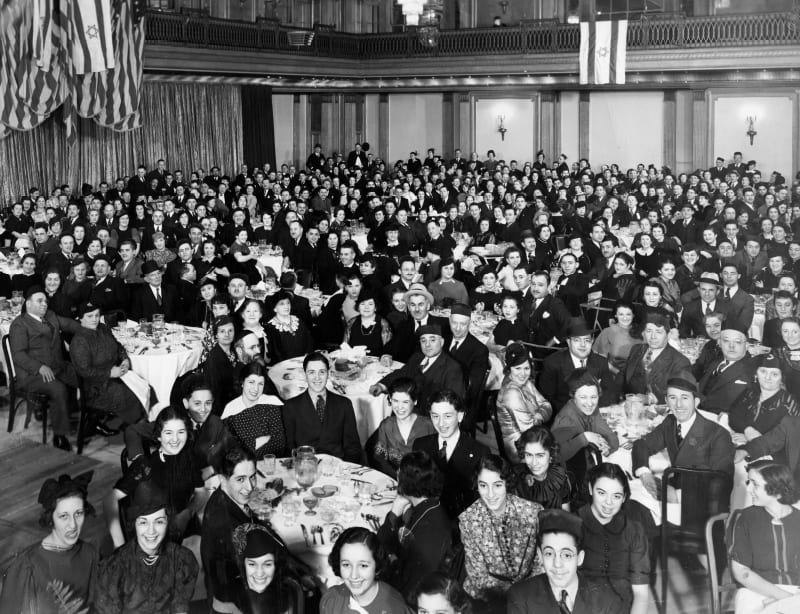 Banquet of the HaPoel HaMizrachi of Chicago, at the Morrison Hotel on January 3, 1936. (Photo: Mizrachi–Religious Zionists of Chicago Archives)

We live in a world our great-grandparents could only dream of. In the prime minister’s office of the State of Israel sits a Jew who dons a kippah and refuses to take calls from Vladimir Putin on Shabbat. Religious Israeli musicians sing songs of faith to sold-out stadiums packed with Jews of every kind. And increasingly, Religious Zionists play a pivotal role in the most dynamic areas of Israel’s economy, from elite cyber units in the IDF to cutting-edge tech startups. Religious Zionists at the center of Israeli life have become so ubiquitous, so commonplace, that it is rarely deemed worthy of notice.

But it wasn’t always so.

Torah Jews had always longed for Zion, but when Herzl’s political Zionism burst onto the scene in the late 1890s, many Orthodox leaders refused to join, offended by the secularism that dominated the movement. But by founding Mizrachi in 1902, Rabbi Yitzchak Yaakov Reines ensured that religious Jews would play a vital role in returning our people to the Land of Israel and in every stage of our people’s rebirth that was to follow.

Alongside the socialist pioneers of HaShomer HaTza’ir, HaPoel HaMizrachi pioneers settled the land, building religious yishuvim and communities. As the new Yishuv developed, Mizrachi built a religious education system, providing a Torah education for tens of thousands of children on the eve of the declaration of the State. And at the extraordinary moment of modern Israel’s birth, Religious Zionist leaders stood proudly alongside David Ben-Gurion, infusing the nascent state with a spirit of faith and the recognition of G-d’s hand in history.

Following the establishment of Israel, Mizrachi fought to ensure Israel would be not only a State for the Jews but also a Jewish state, in which Shabbat observance and kashrut would be recognized and honored, if not yet observed by all. And today, as the locus of Jewish life has shifted to Israel, Mizrachi sends hundreds of shlichim to Jewish communities all over the world, inspiring Jews everywhere with the Torah of Eretz Yisrael.

Reflecting on Mizrachi’s role in the miracle of modern Israel, Rabbi Joseph B. Soloveitchik wrote: “If not for Mizrachi, Torah-true Judaism would not have participated in the building of the Land of Israel and the establishment of the State. It has written a glorious chapter in the annals of the Jewish people and salvaged our honor.”

Indeed, it is difficult to imagine the Israel of today without the beating heart of Mizrachi and Religious Zionism.

Today, many of these accomplishments are taken for granted. But as we celebrate the 120th anniversary of Mizrachi’s founding, it is an opportunity to reflect upon our movement’s astonishing history and give thanks to the extraordinary people who did so much to make the dreams of our people come true.