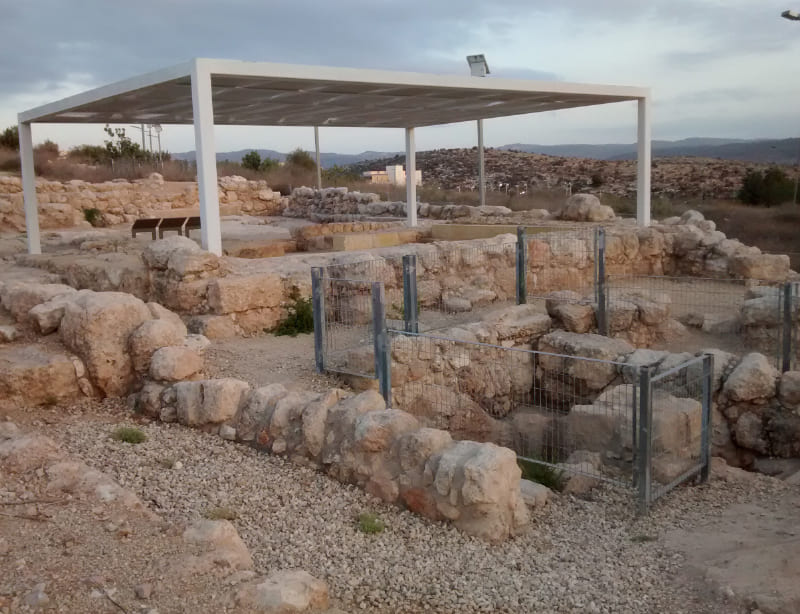 Modi’in and the Ancient Maccabee Synagogue

The story of Chanukah begins with an act of rebellion against the Greeks in the ancient town of Modi’in. What made this town unique?

The rabbis rule that only those who do not live “too far” from Yerushalayim are obligated to make the pilgrimage to the Beit HaMikdash, with “too far” defined as any location more than 15 mil from Yerushalayim in any direction (Pesachim 93b). In the Mishnah, Modi’in is used as a concrete example of this distance. While in modern times, this distance is a mere 30-minute drive from Yerushalayim, Rabbi Ovadia Yosef ruled that Modi’in set the boundary for all generations.

This designation of Modi’in highlights its geographic significance in ancient Israel. It was situated close to three major roads leading to Yerushalayim amidst fertile fields and so it became a convenient stop for pilgrims on their way to Yerushalayim. Additionally, the Rabbis considered Matityahu’s priestly family of Yehoyariv halachically reliable, decreeing all pottery made in Modi’in to be tahor (ritually pure).1 This gave pilgrims the green light to purchase local produce and pottery in Modi’in on their way to the Beit HaMikdash.

The archaeological site of Umm El Umdan (derived from the name ‘Modi’in’) is situated at the outskirts of modern Modi’in, where the excavation uncovered a village with an ancient synagogue. The synagogue area dates to the late Herodian period, the strata below it to King Yannai (104–67 BCE), and the strata below that to Yochanan Horkenus, nephew of Yehudah the Maccabee (134–104 BCE). As is typical in ancient synagogues, there is no ark; scholars believe the Torah scroll was stored nearby and brought into the synagogue for Torah readings. A stone base found in the center of the synagogue was likely the table on which the Torah was read, while worshippers sat on stone benches located alongside the walls.

Similar to other synagogues of the second Temple era, additional benches were discovered in an adjacent courtyard, suggesting that this was the site of the local school. The Talmud’s praise supports Rabbi Yehoshua ben Gamla (1st Century BCE), who established compulsory universal education for all Jewish children aged six and up.2

Near the synagogue, archeologists uncovered alleyways leading to houses (known as insulae) built around a central courtyard. Some homes had second floors and were well built, indicating the village was prosperous. Water cisterns, ovens, wine and olive presses were also uncovered nearby.

Adjacent to the industrial area and the synagogue is a mikvah, indicating that the workers would use it to become ritually pure before engaging in wine and olive production. This was critically important, as it ensured the final product remained pure and could be used in the Beit HaMikdash or by Chaverim (people who carefully observed the laws of ritual purity in their daily lives). The mikveh was also important for pilgrims to Jerusalem, who were often housed in the synagogue, allowing them to immerse and wash their hands before eating their meals.

The ancient village of Modi’in is a wonderful place to visit on Chanukah. Visitors can stop at the newly opened Hasmonean Heritage Museum in Modi’in and then travel to the site. Walking through Umm El Umdan, you can relive the moment when Matityahu slays the Greek officer who tried to force the people to worship idols and stand in the very place where Yehudah the Maccabee launched the war that was to free the Jewish people from Greek domination. The light of our Chanukah candles began to shine at this extraordinary site.

Ruchama Alter, originally from Toronto, is a certified tour guide in Israel. She specializes in Biblical and Mishnaic/Amoraic period sites, and loves to share her enthusiasm for Israel and its history.