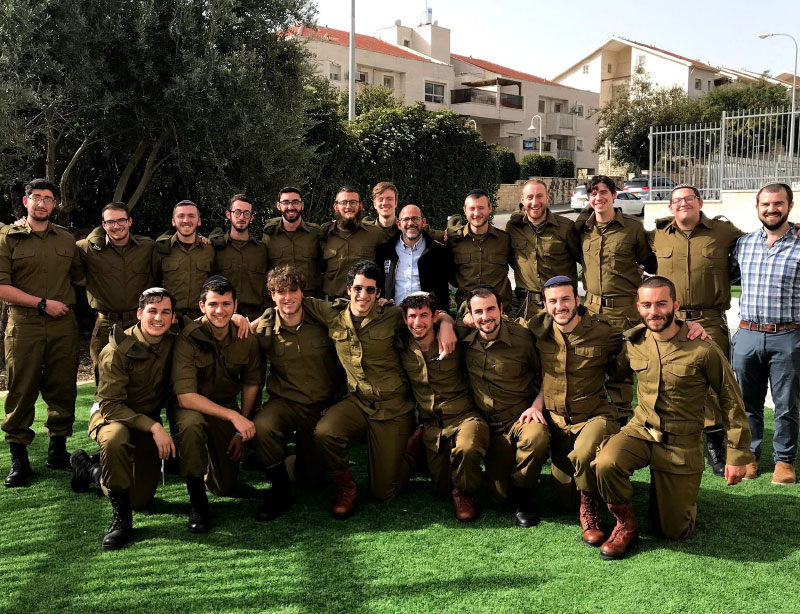 “Not So Crazy Anymore”

Tell us about your experience in the IDF, and how it impacts your work with Lev LaChayal.

My experience in the army was very different from that of most guys in Hesder or Machal. I drafted into an elite special forces unit, known in Hebrew as “Gadsar Givati,” and served for three full years.

I’ll never forget something that happened while I was trying out for my unit. One morning, as I was about to daven shacharit, my mefaked (commander) told me that I would only get ten minutes to pray before continuing the tryout. According to army law, during training one must be provided with at least forty-five minutes to daven. After explaining this to the mefaked, he compromised and gave me fifteen minutes “but not a minute more, or your tryout is over and you’re going back to base!” Knowing my rights, I took the full forty-five minutes necessary to properly daven. Two and a half years later, when I was training newly-drafted soldiers, I happened to cross paths with my old mefaked. I re-introduced myself to him and asked if he remembered me. He responded, “Of course I remember you”, and went on to repeat this exact story. I asked him why he remembered me so well, and he said, “I, myself, am religious. When I was evaluating who was fit to join the unit, I wanted to make sure that those who were religious were truly committed to Judaism. If the religious soldiers conceded and accepted the fifteen minutes I offered them to daven, I would deduct points from their overall score. You are one of the few people who passed.”

In the army, many people do not value your religious rights or resent you for requiring special treatment. Over time, this can have a damaging effect on the religious soldiers. At the beginning of my service, about half of the soldiers in my unit were religious, but by the end of our service, many of them were less observant.

These challenges are even greater for lone soldiers who have to navigate bureaucracy, living arrangements, and finances all by themselves. In fact, loneliness is the greatest challenge religious lone soldiers face; without a religious social environment, it is difficult to remain committed to an observant lifestyle. This is why we created Lev LaChayal – to make sure that religious lone soldiers never have to be alone and get the support they need.

Why was Lev LaChayal started, and what makes the program unique?

While serving in the IDF, Lev LaChayal was the program I wished I had. I wasn’t the only one who felt this way. I often spoke with my roommate, Yehuda Yager, about how much a lone soldier support system would have helped us while we were in the IDF. The day I was released from the army, I returned to Yeshivat Lev HaTorah and discussed the idea with Rabbi Binyamin Kwalwasser (now executive director of Lev LaChayal), who loved the idea. Together with Rabbi Dudi Winkler (now director of Lev LaChayal), we opened Lev LaChayal the following year. The first few years were small, with 5 to 7 lone soldiers each year, but the program has since exploded in popularity. We are now supporting over fifty students currently in the IDF.

How does the program help students acquire the necessary skills and spiritual fortitude to prepare them for their army service?

In order to draft into the IDF, you need to be able to speak Hebrew at a certain level, and if you don’t meet that standard you have to join Michve Alon, a co-ed IDF training base for olim – a very challenging environment for religious students. Lev LaChayal, in cooperation with the Ministry of Defense and the Association of Hesder Yeshivot, offers a Hebrew language course that is an ideal alternative to Michve Alon.

IDF service is very stressful, and so we provide our students with direct access to a psychologist and offer weekly classes preparing students for the psychological challenges of serving in the army. We also provide physical training twice a week – not to get the students into shape, but to teach them how to push themselves mentally. I personally run this program, and I believe these skills not only help them in the army, but also translate into many other areas of life – like being able to push themselves in their learning in the beit midrash.

Most importantly, we help our students strengthen their spiritual foundation. We learn about the spiritual ideal of serving in the army as well as the halachic issues that they will grapple with in active service. We help our students understand that serving in the IDF is about self-transcendence, about sacrificing our own concerns for something greater than ourselves.

How has the landscape for religious lone soldiers changed since your IDF service twelve years ago?

In recent years, something has changed; there has been a paradigm shift. I don’t know if it’s because of programs like Lev LaChayal and Yeshivat Hakotel or the improving Israeli economy, but somehow, for Anglo students, fulfilling the dream of serving in the IDF has become normal. I’m not so crazy anymore! More and more young Diaspora Jews want to serve on behalf of our people and country. At Lev LaChayal, we’re here to help our students fulfill their dreams – and begin rich, meaningful lives here in Eretz Yisrael.

Yedidyah Rosenwasser, from Chicago, Illinois, served in the IDF through the Yeshivat Hakotel hesder program, and is now learning in yeshivah in shana daled. He also works as an intern for HaMizrachi magazine.