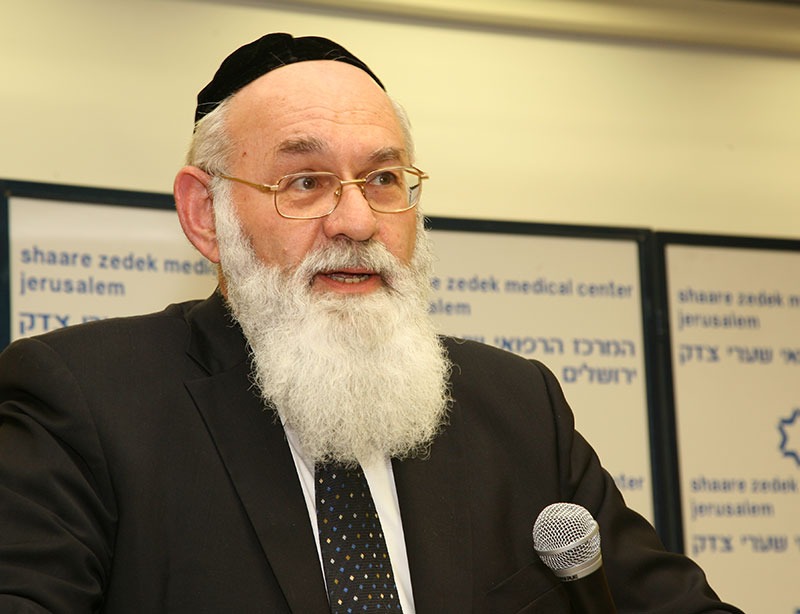 One on One with Rabbi Prof. Avraham Steinberg

One of the world’s greatest experts in Jewish medical ethics, Rabbi Prof. Avraham Steinberg is the author of the seven volume Encyclopedia of Jewish Medical Ethics, for which he was awarded the Israel Prize. A senior pediatric neurologist and medical ethicist at Shaare Zedek Medical Center in Jerusalem, he is also the Director of Yad HaRav Herzog and the head of the editorial board of the Talmudic Encyclopedia, a monumental project begun in 1942 which aims to summarize the halachic topics of the Talmud in alphabetical order. The encyclopedia is due to be completed in 2024.

Rabbi Aron White recently spoke with Rabbi Steinberg about the significance of the Talmudic Encyclopedia.

The Jewish people are known as the “People of the Book”; throughout the generations, our people have written many libraries of books on the Talmud and Jewish law. Why did Rabbis Meir Bar-Ilan and Shlomo Yosef Zevin believe that it was necessary to write the Talmudic Encyclopedia?

There were two primary motivations behind the creation of the Talmudic Encyclopedia. Throughout history, periods of creative halachic output have been followed by the need to gather and organize that material; Maimonides’ Mishneh Torah and Rabbi Yosef Karo’s Shulchan Aruch are prime examples of sefarim that consolidate and organize halachic literature. Rabbis Kook and Herzog, the first two Chief Rabbis in Eretz Yisrael, both believed that after many generations in which rabbis wrote books, commentaries and teshuvot, their generation needed to gather that material together. No one can possibly learn all that has been written, and so the idea of the Talmudic Encyclopedia was born. The goal of the encyclopedia was incredibly ambitious, aiming to summarize all halachic literature, from the Chumash through the Talmud, Rishonim and Acharonim, in a clear system, organized by topic.

The second major impetus for the project was the tragic destruction of Torah during World War II. When Rabbi Meir Bar-Ilan, one of the leading Mizrachi figures in the 20th century, heard what was happening in Europe, he realized that it was not only the Jews that were being destroyed, but the Torah itself as well. He wanted to ensure that the Torah would be preserved and protected, and it was this that drew him to join Chief Rabbi Herzog in beginning the project. As well as beginning a Talmudic Encyclopedia for halacha, they considered doing the same thing for aggadah, but it didn’t work as well; it’s much more complicated to come up with a comprehensive and organized list of all topics in aggadah! Chief Rabbi Herzog appointed Rabbi Shlomo Yosef Zevin to lead the project, who had the remarkable ability to write in a way that is short and clear, a talent no one has been able to replicate since.

I joined the project in 2006 when we were in dire financial straits, so the project went very slowly. Dov Friedberg of Keren Toronto got in touch with us, and he offered his support for the project, provided that we finish it quickly. Since he began his support, we have been working much faster. Of the 2,500 total entries, we have 300 left to complete. As we complete about 100 entries a year, we should finish the writing by the end of 2024. We have incredible appreciation to Dov Friedberg and Keren Toronto, to the Rohr family, Mr. Zvika Ryzman, Israel’s Ministry of Culture and many others for their support of the project. At the end of 2021, we held an event to celebrate the publication of Volume 48 at the President’s residence with President Herzog, who feels a great connection to the project because of his grandfather Chief Rabbi Herzog’s involvement. We were also honored to be joined by Rabbi Hershel Schachter from Yeshiva University.

From its inception, the project was supported and funded by Mizrachi, but the editors and writers of the Encyclopedia have represented a broad spectrum of rabbis and Jewish scholars: Rashei Yeshivah from Chevron and Merkaz HaRav, rabbanim associated with Chabad and professors from Bar-Ilan University. How have you been able to work on a Torah project with a team of such varying backgrounds and world views?

One of the beautiful things about the project is that we are an island of sanity in the middle of the Torah world! For our project, it makes no difference which kippah you wear or whether you are Sefardi or Ashkenazi. We have only two requirements for our writers: they must be high-level Torah scholars, and they must know how to write. In both the Religious Zionist and Chareidi circles, it is easy to find knowledgeable Talmidei Chachamim, but there is a great shortage of Talmidei Chachamim who can write well! We provide seminars in writing for some of our new recruits to improve their skills. We are very proud that our Beit Midrash is a model of coordination between religious Torah scholars of all types, without politics or hashkafic arguments getting in the way.

How has technology and the internet changed the Talmudic Encyclopedia project? Is it now easier to create something like this, or has the ability to access Torah through Otzar HaChochmah or Google made this project superfluous?

It is true that new technologies have given us incredible resources, but the Talmudic Encyclopedia still provides something unique to those learning Torah. Let’s say you want to learn the topics of chazak and migu, and you enter those into Otzar HaChochmah. You will receive 20,000 entries, which is too much information to sift through. You also could search on Google and read lots of articles, but you don’t know what is reliable and what isn’t. Our researchers and writers have taken all of this information and summarized it, including only what is most important and most reliable. These resources are helpful, as we no longer need to employ people specifically to find material, because it is all at our fingertips. But the craft of organizing, summarizing and deciding what to include and what to leave out is still an effort requiring great skill.

We are also planning to make the whole encyclopedia available digitally, both on USB and on our website. The full set will be 80 volumes, which is too large for the average person to buy.

Your own personal Torah output is truly astounding. You have written over 40 books, 280 published articles and 4,000 court briefings as well as your own encyclopedia, the Encyclopedia of Medical Halacha, for which you won the Israel Prize. What inspires you to keep writing and teaching more? Do you have any words of advice for busy, working people who are trying to increase and strengthen their Torah study?

I think that every busy person has to find an area of Torah that interests them. There is something to be said for programs like Daf Yomi, which provide consistency as well as a social outlet. But one who wants to deepen their knowledge, and do something new must learn something they find interesting. I was practicing as a doctor, so I focused on medical halachah, which became my passion and core area of learning. For a businessman, it makes sense to focus on halachic topics such as ribbit (lending with interest), ona’ah (monetary deception) and mekach u’memkar (business transactions). This is practically helpful, and if you find a topic you love and really study it deeply, you are also more likely to produce new insights and possibly write books and articles that can be meaningful to others. Don’t try learning everything at once – find a topic you find interesting, and start from there!