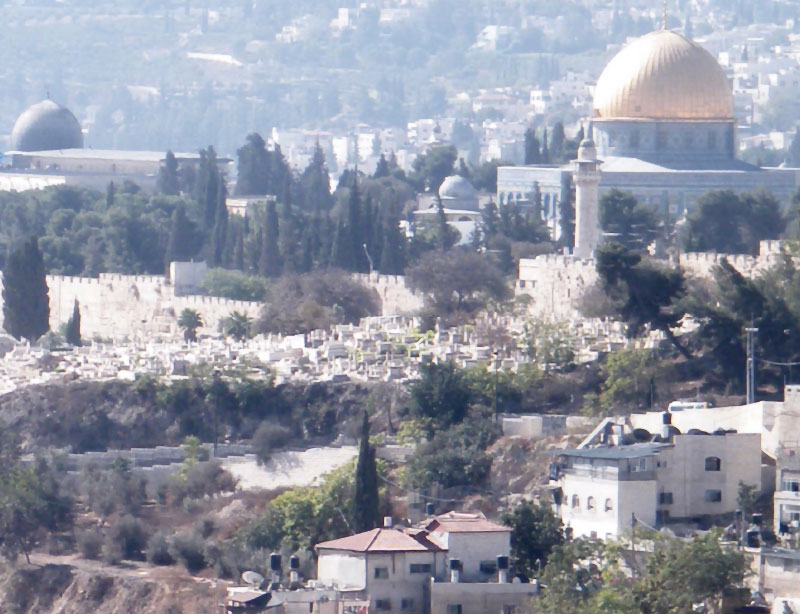 It happened that Rabban Gamliel, Rabbi Elazar ben Azaria, Rabbi Yehoshua and Rabbi Akiva went up to Jerusalem. When they reached Mount Scopus, they tore their clothing. When they reached the Temple Mount, they saw a fox emerging from the Holy of Holies. The others started weeping; Rabbi Akiva laughed. They said: “Why are you laughing?” He responded: “Why are you crying?” They said: “A place so holy that it is said of it, ‘the stranger that approaches it shall die,’ now foxes walk there, and we shouldn’t cry?” Rabbi Akiva said: “That is why I laugh. For it is written, ‘I shall have bear witness for Me faithful witnesses, Uriah the Priest and Zechariah’ (Yishayahu 8:2). What is the connection between Uriah and Zechariah? Uriah lived at the time of the First Temple, and Zechariah was at the time of the Second Temple! The Torah is making Zechariah’s prophecy dependent upon Uriah’s prophecy. With Uriah, it is written: ‘Therefore, because of you, Zion shall be plowed as a field; Jerusalem shall become heaps, and the Temple Mount like the high places of a forest’ (Michah 3:12). With Zechariah it is written, ‘Old men and women will sit in the streets of Jerusalem’ (Zechariah 8:4). As long as Uriah’s prophecy was not fulfilled, I feared that Zechariah’s prophecy may not be fulfilled either. But now that Uriah’s prophecy has been fulfilled, it is certain that Zechariah’s prophecy will be fulfilled.” With these words they replied to him: “Akiva, you have comforted us! Akiva, you have comforted us!” (Makkot 24b)

This famous passage is difficult to understand. When the rabbis reached Mount Scopus and saw the destruction of the Temple Mount, all of them tore their clothing in accordance with halachah – including Rabbi Akiva. But a short while later, when they reached the Temple Mount, Rabbi Akiva began to laugh. What changed during the time of that short trip? Why did only Rabbi Akiva laugh? And why did Rabbi Akiva’s insight make such an impact on the other rabbis? Surely they already knew the verses Rabbi Akiva cited!

A careful study of the story brings us to one conclusion: only Rabbi Akiva, with his extraordinary personality, vision and optimism, could have responded this way. Imagine the socio-political situation of the Jewish people during the time following the destruction of the Beit HaMikdash and the trauma of war and destruction which was permanently etched in their consciousness. They still remembered the Beit HaMikdash in its glory, the kohanim doing their holy work and the levi’im who sang so beautifully there. How could they not be depressed?

Our rabbis taught: When the Temple was destroyed, many Jews became ascetics, binding themselves neither to eat meat nor to drink wine… Rabbi Yehoshua said: “My sons, listen to me. Not to mourn at all is impossible, because the blow has fallen. To mourn too much is also impossible, because we do not impose on the community a hardship which the majority cannot endure”… The rabbis have therefore decreed: A man may stucco his house, but he should leave a little bare… A woman can put on all her ornaments, but leave off one or two.” (Bava Batra 60b)

After tearing his clothing at Mount Scopus, Rabbi Akiva thought to himself: “Will we forever live depressed? Isn’t it our duty to inspire a new spirit and hope in the hearts of the people?” As he walked in heavy silence with the other rabbis to the Temple Mount, Rabbi Akiva became determined to change the attitude of his friends – and the entire Jewish people. Seeing a fox at the Holy of Holies, Rabbi Akiva consciously sought verses of consolation and hope. Yes, the other rabbis knew these verses, but only Rabbi Akiva could think of them at such a time. “Akiva, you have comforted us! Your optimism has infused us with optimism!”

Rabbi Akiva’s entire life was one of optimism and faith. It is what gave him the strength to begin learning Torah at the age of forty, and to persevere through many years of terrible poverty. It was Rabbi Akiva who said that “all G-d does is for the best”, and it was Rabbi Akiva who established the blessing of redemption. And it is Rabbi Akiva who continues to give us strength and optimism, even during the most difficult times.

This, too, is the mission of World Mizrachi – to bring optimism to every corner of the Diaspora. After two thousand years of exile, our people are finally returning home to our Land, working together to rebuild the Beit HaMikdash. May we soon see that day!