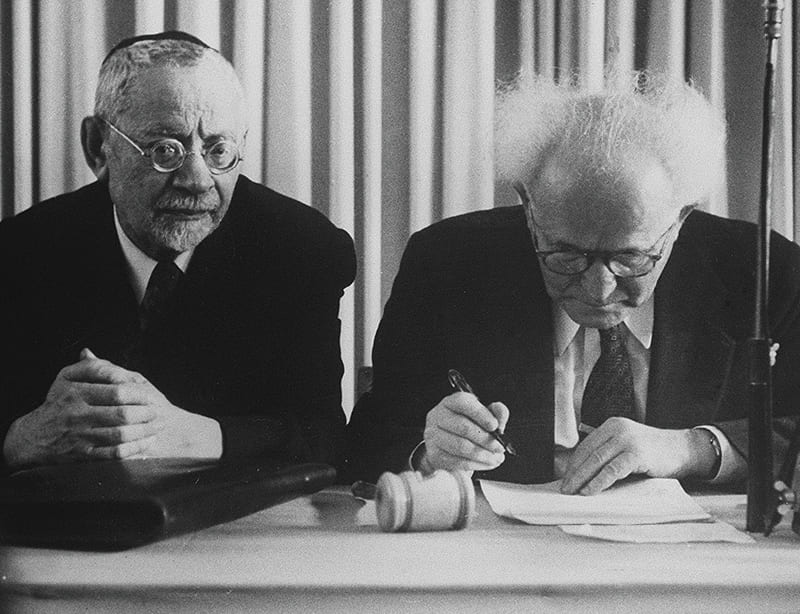 David Ben-Gurion signs the Declaration of Independence on May 14, 1948. Sitting beside him: Rabbi Yehuda Leib Maimon. (Photo:Hans Pinn, GPO)

Rabbi Maimon and the Founding of the State

Herzl, Ben-Gurion, Weizmann – these are the names most famously associated with the birth of modern Israel. But this list of founders should also include a Mizrachi leader, Rabbi Yehuda Leib Maimon, who played a critical role during the most awe-inspiring moments of Israel’s birth, imbuing the nascent State of Israel with the Mizrachi spirit of Torah and faith.

Yehuda Leib Fishman grew up in Bessarabia, and after years of study in Lithuanian yeshivot, received rabbinic ordination from Rabbi Yechiel Michel Epstein, the author of the Aruch HaShulchan. A Religious Zionist from a young age, he joined Mizrachi from its inception in 1902, attending Zionist Congresses and advocating on its behalf.

In 1913, he moved to Palestine to lead Mizrachi in Eretz Yisrael, where he Hebraicized his last name to Maimon and became the head of Mizrachi’s educational system, which ultimately grew to include tens of institutions and thousands of students.

At the outbreak of World War I, he was imprisoned by the Turkish authorities and sentenced to death, but was eventually freed due to the intervention of American Jewish leaders and brought to the United States. While there, he helped organize and strengthen Mizrachi USA before returning to Eretz Yisrael at the end of the war.

In June 1947, a United Nations Special Committee on Palestine (UNSCOP) delegation came to Palestine to examine the situation. The committee was preparing a report that would play a critical role in determining whether the United Nations would support the founding of a Jewish State. When the delegation met with the Zionist leadership, Ben-Gurion asked Rabbi Maimon to speak to the committee about the religious foundation of Zionism. His speech is a powerful summary of the Mizrachi worldview and was a golden opportunity to explain how religious Jews view the idea of a Jewish state to the nations of the world.

“There is an insoluble bond between the People of Israel and its Torah, and there is similarly a strong and enduring tie between our people and this land, the like of which is not to be found elsewhere. The bond between the people and the land was maintained throughout the ages and throughout the lands of exile. From the time of Joshua to the present day, for a period of 3,318 years, Jews have lived in the Land of Israel in an unbroken sequence. After the destruction of the First Temple by Babylon and again after the destruction of the Second Temple by the Romans, Jews continued to dwell on this sacred soil. Those who were exiled to foreign lands strove at all times to strengthen the Jewish population of Palestine materially and spiritually. From the days of Daniel to the present day, every Jew has turned his face towards Jerusalem as he says his prayers…

Throughout the ages, we find Jews making efforts to reach the Land of Israel. Many would leave their homes and property, their families and friends, to wander from country to country in an attempt to reach the Holy Land… The Mizrachi Organization, which is wholly religious in character, has been enabled… to take part in the reconstruction of the country. Dozens of [Mizrachi] villages have been established together with elementary and secondary schools, and they exert a most profound influence… Religious Jewry wants to see the new Jewish life in this country built upon the foundations of the law of Israel…”

On November 29, 1947, three months after the committee’s visit to Palestine, the United Nations voted to partition Palestine and support a Jewish State. Despite his disappointment that parts of Eretz Yisrael had been designated for an Arab state, Rabbi Maimon declared that this U.N. decision is “the start of our redemption, the dim twilight of a new morning which is steadily coming towards us.”

Upon arriving in Tel Aviv, Rabbi Maimon demanded that G-d be acknowledged in the Declaration of Independence, which led to angry opposition by the atheists and communists on the Council. Ultimately, a compromise was reached, with the Declaration’s concluding paragraph stating:

“Placing our trust in the Rock of Israel (Tzur Yisrael), we affix our signatures to this proclamation…”

In her biography of her father, Rabbi Maimon In His Generations (Mossad HaRav Kook, 1998), Rabbi Maimon’s daughter Geulah Bat-Yehudah describes the fateful moment of Israel’s birth:

“The moment has arrived. Ben-Gurion reads the ‘Foundation Scroll’ (Declaration of Independence) clause by clause. When he reaches the sentence, ‘We hereby declare the establishment of a Jewish State in Eretz Yisrael, to be known as the State of Israel,’ the assembled rise and break out with prolonged applause. Ben-Gurion continues to read, ‘Placing our trust in the Rock of Israel…’ and when he finishes, he says, ‘let us accept the Foundation Scroll of the Jewish State by rising.’

Rabbi Maimon rises, shaking with emotion, his throat choking with tears, and using the Divine Name, recites the Shehecheyanu blessing, ‘Who has kept us alive and sustained us to this season.’ Cries of ‘Amen’ from the assembled resound through the air.”

After the ceremony, the founders of Israel all signed their names to the bottom of the Declaration of Independence. When signing his name, Rabbi Maimon added the words ’בעזרת ה, “with the help of G-d,” ensuring G-d’s name would be inscribed upon the founding document of the Jewish State. In doing so, Rabbi Maimon represented believing Jews worldwide, who had yearned for so long to see this day.