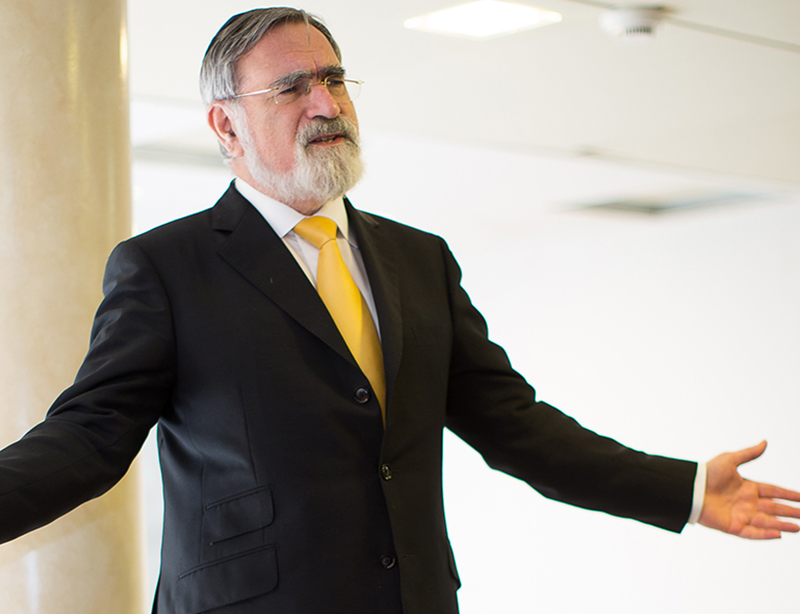 Rabbi Sacks: Friend to the Educators

It is hard to believe it has been a year already since we lost our Rav. The feelings of bereavement and loss without his guiding voice has hardly lessened. So many have and will continue to write about the impact he made on their lives and the wider world. I would like to focus on the impact of Rabbi Sacks on my profession, as a Jewish educator.

Jewish education as a core and central value in Judaism permeated all of his writings, from his weekly Covenant & Conversation to his most sophisticated and universal philosophical volumes.1

In Rabbi Sacks’ words, “for Jews, education is not just what we know. It’s who we are.”2 He was deeply proud of the role he played in the exponential growth in Jewish schools in Britain during his tenure as Chief Rabbi.

Of all the titles he deservedly held, he was proudest of the title ‘Rabbi’, which he explained in its essence means simply ‘teacher.’

He wrote extensively on the role of Jewish education in history, which he noted was a universal right in Jewish civilization 18 centuries before Britain became the first country in the world to legislate universal compulsory education. He believed that this was the secret of Jewish survival and continuity.

For Rabbi Sacks, educators are the heroes of the Jewish people: “The people who really shape our life.”3 It was always Rabbi Sacks’ sincere wish to be a resource to Jewish educators across the world, and his efforts on this front intensified during his last years when he commissioned several projects aimed at younger and broader audiences.4

Rabbi Sacks was an exemplary role model to Jewish educators. As Gila, his daughter, noted on the occasion of his being awarded the Templeton Prize in 2016, he embodied the statement of Ben Zoma “Who is wise? He who learns from every person.”5 He found spiritual and religious relevance in all areas of knowledge and culture, from secular philosophy to behavioural economics, from Beethoven to Eminem, and from contemporary cinema to sports.

Rabbi Sacks also modelled creative pedagogy, including masterful storytelling, the strategic use of humour, the communication of complex ideas in diverse ways for diverse audiences and the harnessing of the most up-to-date technology to spread his ideas.

In the weeks and months since his death so many stories of Rabbi Sacks as a personal ethical role model have been shared, painting a picture of a true mensch who made himself available to anyone that sought him out. This may be the most important lesson he modelled for Jewish educators.

For me, the most important contribution Rabbi Sacks made to my work was his thought itself. I often work with young Jews who struggle to find personal meaning in their Jewish education on offer to them; all too frequently they are only taught to see the trees, but not the forest. Rabbi Sacks’ thought presents a ‘big picture Judaism’ that gives a broader meaning to Jewish life. He dedicated many books and speeches to address the simple question “why be Jewish?” He gave us a philosophy of mitzvot that help us understand the bigger picture behind the minutiae of halachah. And he showed that Judaism is not only about building a personal relationship with G-d, but also about our national mission and our people’s contribution to the broader world.

Rabbi Sacks has left us so many rich resources to help our work, as educators and parents. Now we must live up to his example, and continue his legacy.

1 For example, an entire chapter in his book The Dignity of Difference.

2 Letters to the Next Generation, Letter 4: Jewish Education.

4 Continuing this is a central element of the vision of the work of The Rabbi Sacks Legacy Trust.

Dr. Daniel Rose is Director of Education at The Rabbi Sacks Legacy Trust.