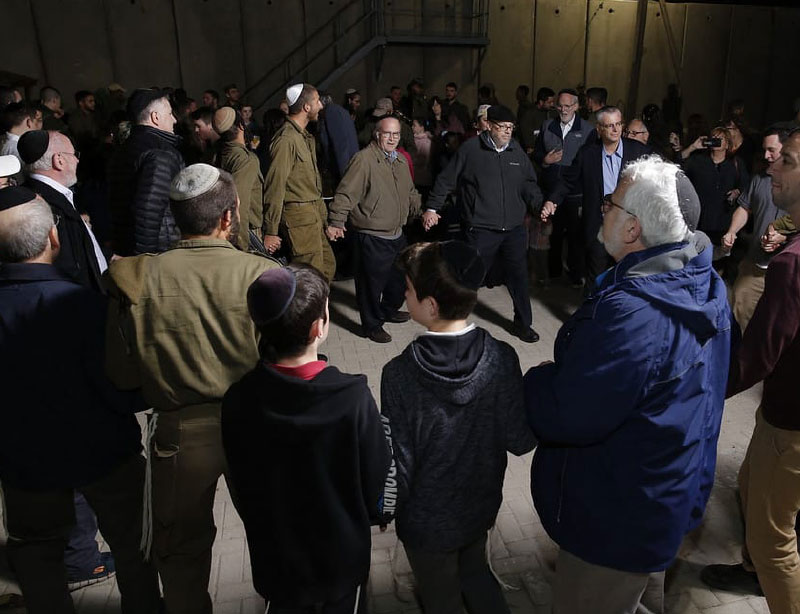 A Ramat Beit Shemesh Chanukah celebration at an army base. (Photo: Courtesy)

Ramat Beit Shemesh: A Home for One and All

On my daily power walk around the circular street of Nachal Dolev, I take in the sights around me. I pass a young Charedi kollel couple pushing their smiling baby in a stroller. I quickly jump out of the way as a small troop of young boys wearing knitted kippot ring their bells and whiz past me on their bicycles. Before I’m able to resume my stride, I make way for the girls rollerblading in my direction, sporting the Bais Ya’akov uniform of light-blue collared shirts and navy-blue skirts. Two Religious Zionist men are engaged in an animated conversation outside the Charedi Mas’at Mordechai Beit Midrash, a shul where men and boys from across the religious spectrum learn and daven at all hours of the day and night. Welcome to Ramat Beit Shemesh Aleph, or “RBS A” in the vernacular.

I cannot say that Jews of all streams live in blissful harmony here in Beit Shemesh. Anyone who has followed the news headlines over the years will know that this is not always the case. While we are fortunate to live at a time when there is a place that every Jew can call home, our country is also extremely divided. The borders between the Charedi and Religious Zionist communities are clearly defined, with each group passionate about its ideology. The communities generally lead parallel lives with limited interaction between the two.

Several years ago, I cold-called a newly discovered Israeli relative that I had come upon through genealogical research. One of the first questions she asked me was what chug I belong to. I didn’t even understand the question correctly. As far as I knew, chugim were after-school recreational activities. I didn’t understand why this was of interest to her, but I answered that I had once participated in a women’s choir. She clarified that she wanted to know which community in Israel I identified with. Before we could continue our conversation, she needed to know which box she could place me in.

This dynamic of clear boundaries also exists in Beit Shemesh, a microcosm of Israel that is home to every type of Jew. However, due to the heavy presence of Anglos, there are several neighborhoods in RBS where one can find shades of gray. Some olim make a conscious decision to abandon some of their long-held beliefs (i.e., the importance of secular education) when they land at Ben-Gurion Airport in an effort to help their children fully integrate into and be accepted by the Charedi community. While this is often uncomfortable for the parents, they believe that, in the long run, their children will benefit from clear messages leading to a clear identity. But other olim believe that both the Charedi and Religious Zionist communities have strengths and weaknesses and so they try to take the best of both worlds. It is not uncommon for these out-of-the-box families to be affiliated with more than one camp.

Rabbi Danny Myers, the rabbi of a Religious Zionist shul and the principal of a Charedi elementary school, circulates comfortably in both communities. The wall in his office displays a showcase of rabbanim, among them Rabbi Aharon Lichtenstein, Rav Kook, Rav Shach, the Satmar Rebbe, and many other rabbis with a broad range of ideologies. He wears tzitzit with techelet and is an outspoken proponent of visiting Har HaBayit. Rabbi Myers believes that there is an organic process taking place in RBS in which some members of both the Religious Zionist and Charedi communities recognize some of the values of the other camp and try to incorporate those values into their own lives. Parents in RBS have established elementary and high schools that are officially Charedi but aim to teach secular studies on a high level and inculcate in their students an appreciation for the army as well as the diverse groups that are part of the landscape of the country in which we live. A Religious Zionist elementary school in RBS that identifies with the Chardal stream sends many of its male graduates to a high school that learns only religious studies for the first three years, similar to the Charedi model. In the 12th grade, they catch up on their matriculation exams. Following the lead of the Charedim, they work tirelessly to limit their children’s exposure to the internet and other less desirable influences.

RBS resident Rabbi Karmi Gross took note of the growing population of people who identify as Charedi but want to play a larger role in Israeli society and established Beit Midrash Derech Chaim, Israel’s first Charedi hesder yeshivah. The students learn Torah for 6–7 hours a day and then study computers at a university level at night. Derech Chaim’s students graduate with a degree in Computer Science, specializing in cyber technology, and then serve for two years in tech units in the IDF. The boys enter the army with the mission of being mekadesh shem shamayim (sanctifying G-d’s name) and hoping to serve as a bridge between the various camps by maintaining “boundaries but not walls”. A mother of one of the boys was once surprised to receive a phone call from her son’s secular commander asking to spend Shabbat in their home. After working with her son for two years, he saw something very special in him and in his upbringing and wanted to experience it himself.

Similarly, another was told from day one by his secular commander not to expect any special treatment as a religious soldier. Approximately six months later, his commander called him from a bakery. He was planning a birthday party for a soldier in the unit and wanted to make sure that the cake he bought had a hechsher that he would be comfortable with. The commander also assured him that since the cake was dairy, he had requested that the soldiers not eat meat beforehand. One soldier at a time, the Derech Chaim boys are bridging the divide.

Yom HaAtzmaut is a day when the shades of gray in RBS are also visible. Some families who identify as Charedi host barbecues and may even have Israeli flags hanging from their balconies. Others will daven in a different minyan than usual in order to recite Hallel on that day. Some Charedi shuls say a prayer for the safety of the IDF and learn in memory of fallen soldiers on Yom HaZikaron. For years, on every Chanukah before the pandemic, an American Charedi would charter buses for members of the community to visit Israeli army bases, where he would distribute fleece jackets to the soldiers and throw a huge Chanukah barbecue for them.

Socially, there is also some mixing between the communities. A popular local summer day camp provides wholesome fun for campers from across the religious spectrum, while a new housing project is populated by Chassidim, Charedim, Religious Zionist and secular Jews, all living together in peace.

In RBS, you will find people who stand firmly in their box as well as others who choose to lead more nuanced lives, each choosing the path that works for them. I feel very fortunate to live in such a beautiful community in our wonderful land, where every type of Jew can feel at home.

Suzie Steinberg is a social worker living in Ramat Beit Shemesh. She writes for many newspapers and magazines and recently published a children’s book titled Hashem is Always With Me.