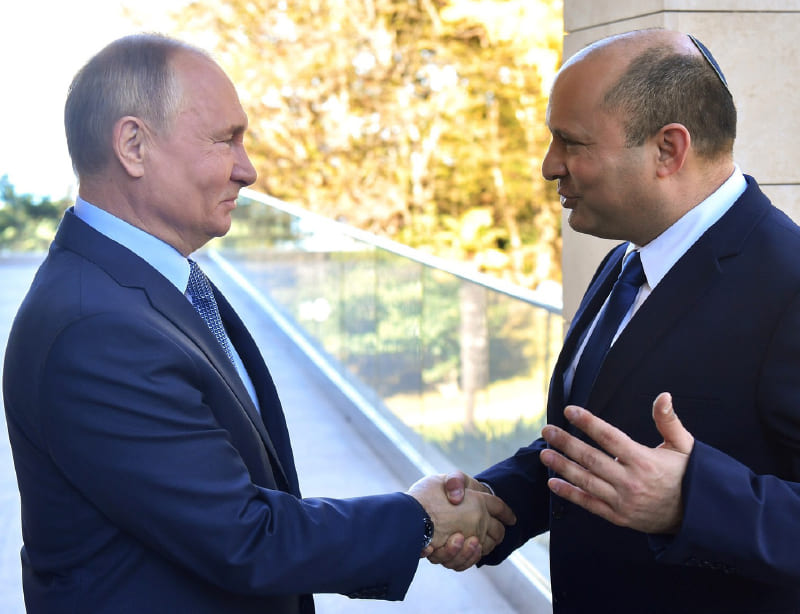 One of the first foreign leaders Israel’s Prime Minister Naftali Bennett met was the Russian President Vladimir Putin, on October 22, 2021 in Sochi.

Today’s Russia is no longer the superpower that was the Soviet Union. It is economically weak and dependent upon energy prices. But it still is a very important country. It has a large nuclear arsenal, and it does not hesitate to use force in foreign affairs (for example, in occupying Crimea). Its energy exports serve as levers of influence internationally. Moreover, it has a significant presence in the Middle East, a region that Russia views as its backyard.

Today, Russia sells arms to Egypt, Iran, Turkey, and several other Arab countries. Egypt has purchased two Russian nuclear power reactors, which will make Egypt dependent on Russian nuclear fuel for several decades. In Syria, the Russian air force is fighting to preserve Bashir Assad’s regime, proving to everyone that Russia does not abandon its allies – in contrast to the US. Assad has rewarded Moscow by providing Russian forces a naval base in Tartus and an air base in Hmeymim. In general, Russia seeks to maintain good relations with all parties in the Middle East, including Iran and Israel, the Palestinian Authority, Hamas, Turkey, and Iraq.

In October 2021, Israel and Russia marked the 30th anniversary of the resumption of relations between the two countries. It is important to recall several important historical facts in understanding the relationship. The Jewish people have a moral debt to Russia (formerly, the Soviet Union) which fought fiercely against the Nazis during World War II. The Red Army liberated many Jews from Nazi death camps. The Soviet Union voted in favor of the establishment of the State of Israel at the UN in 1947 (it did so primarily to push Britain out of the region). It enabled the transfer of weapons from Czechoslovakia to Israel during Israel’s War of Independence.

This sympathetic stance towards Israel was replaced by a distinctly pro-Arab orientation in the 1950s. Israel and Russia were on opposing sides during the Cold War. The Soviet Union became the arms supplier for most Arab countries and trained their armies, seeking influence in the Middle East at the expense of Western powers. In the wake of the 1967 Six Day War, the Soviet Union led most Eastern bloc countries into severing diplomatic ties with Israel and moved to consistently vote against Israel in all international institutions. After the end of the Cold War, Russia reestablished diplomatic relations with Israel and posted an ambassador in Tel Aviv.

Cordial relations followed. Russia opened its gates for the Jews to leave. Occasionally, Israel refrained from voting on anti-Russian resolutions at international fora. Israel even sold Unmanned Air Vehicles (UAVs) to Russia. In an unexpected, unprecedented and curious move, Moscow recognized West Jerusalem to be Israel’s capital (April 2017), making Russia the first country in the world to extend such a recognition to any part of the city. In parallel, Russia declared that the eastern part of the city should be the capital of a Palestinian state.

President Putin sees Israel as a solid advanced country with impressive military capabilities, willing to use force to attain state interests. He also acknowledges that Israel is a key US ally in the region and even sees Israel as a potential tool for influence over the United States. A reflection of this attitude was a trilateral meeting of national security advisors from the three countries, held in Israel in June 2019. The three senior officials discussed regional and bilateral and trilateral matters, another sign of Russia’s desire to be considered a significant power on par with the US.

Unlike some of his compatriots, Putin has a positive attitude towards Jews, reportedly due to childhood experiences. Moreover, he regards the 1.5 million native Russian-speaking Israelis as a Russian diaspora to be cultivated. Israel is considered the world’s only part-Russophone country outside of the former Soviet states. The Russian language is the third-most widely spoken first language in Israel after Hebrew and Arabic; Israel has the third-largest number of Russian speakers outside of the post-Soviet states and the highest proportion of the total population. Israel is the only country in the Middle East where the Russian language and culture are vibrant. In addition, over 100,000 Israeli citizens live in Russia, with 80,000 Israelis living in Moscow.

The first meeting between Putin and Naftali Bennett appears to have gone well. Putin missed the previous Israeli leader, Binyamin Netanyahu, who he had a good working relationship with. Yet relations between states transcend personal chemistry. Filling Netanyahu’s big shoes is not easy, but Bennett has likely learned much from working closely with Netanyahu.

The dialogue with Russia and Putin should use a realpolitik language. This is the language that Putin understands well and is comfortable with. An attempt to speak in American liberal clichés is doomed to failure.

The central meeting of Israeli and Russian interests is in Syria. Moscow wants to maintain the Assad regime because it needs bases on the Mediterranean shore. Russia understands that Israel has the power to rock the boat and undermine Assad’s rule. So Russia has good reason to be sensitive to Israel’s concerns about Iranian entrenchment in Syria. Like Israel, Moscow dislikes a strong Iranian influence in Damascus. This explains why, until now, Russia has allowed Israel to strike at Iranian targets in Syria. It is essential for Bennett that Israel preserves this quiet understanding.

At the same time, Israel-Russia understandings on the Iranian nuclear issue should not be expected. Russia sees a strong Iran as a useful factor that weakens the regional status of the US, which is Russia’s main rival in the international arena. Although Russia does not desire a nuclear Iran, it prefers other nations take steps to prevent such a scenario.

The bilateral relationship between Russia and Israel is complex and fragile. Jerusalem should have good communication channels with Moscow in the Hobbesian world we live in.

Professor Efraim Inbar is President of the Jerusalem Institute for Strategy and Security (JISS).