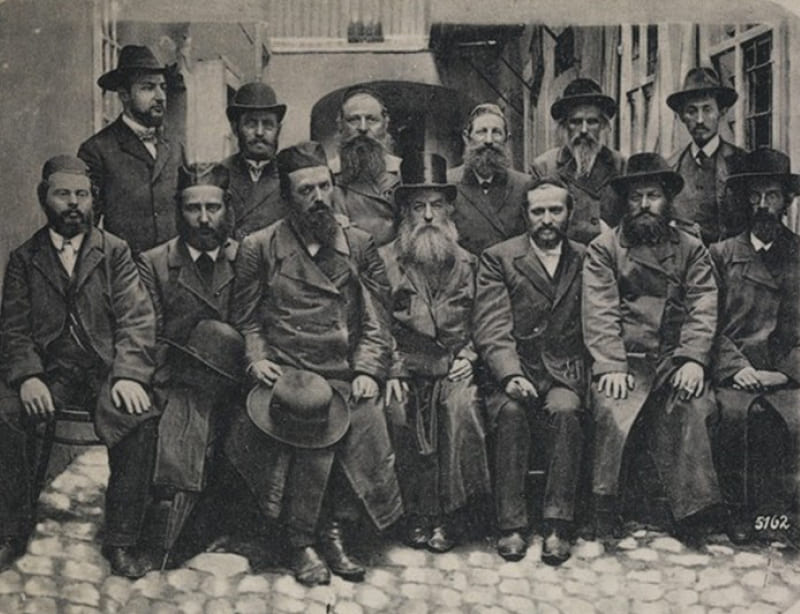 A postcard featuring Rabbi Reines (center, seated) and other members of Mizrachi, in Vilna, 1902. (Photo: National Library of Israel)

It was an ordinary Shabbat afternoon in the early spring of 1891, and 21-year-old Moshe Reines – son of Rabbi Yitzchak Yaakov Reines – reached for a book on the top shelf of the bookshelf in his father’s study. Suddenly, the entire bookcase collapsed on top of him without warning, crushing him with its weight.

The Reines family desperately tried to save his life, but to no avail; Moshe – a prodigy who had mastered the entire Talmud and was an acknowledged expert in Jewish history – was dead. Despite the shocking tragedy, his father somehow remained calm, even as it became clear that Moshe’s life had been snuffed out. Without expressing any emotion, Rabbi Reines told the family to leave Moshe’s body in the study until after Shabbat. They left the room, and Rabbi Reines closed the door and went to shul to daven.

After Maariv, Rabbi Reines returned home and made havdallah, still calm and composed. But moments later, Rabbi Reines turned pale, his eyes rolled back, and he fainted to the floor, collapsing to the ground in a heap of unbearable grief.

Rabbi Reines’ two-stage reaction to his son’s death made such an impression on his family that his descendants still recall it with awe. In January 2020, at an event inaugurating the gift of Rabbi Reines’ archives – a collection of 20,000 handwritten manuscript pages – to the National Library of Israel in Jerusalem, it was the main story of a speech given by his great-granddaughter. Indeed, it is this story that encapsulates Rabbi Reines, who balanced his utter devotion to G-d with deep-seated humanity, and whose superhuman religious faith was the hallmark of his exceptional personality.

Rabbi Reines came from a background steeped in difficulty and tragedy, and at the same time, enveloped in hope and optimism. His father, Rabbi Shlomo Naftali Reines (1797–1889), was part of a group – followers of the Vilna Gaon – who moved from Lithuania to Eretz Yisrael in 1809. The members of this group, led by Rabbi Yisrael of Shklov (1770–1839), were motivated by a mystical conviction that mandated living in the Holy Land in anticipation of messianic redemption. They settled in Tzfat, where living conditions were rudimentary, and supporting a family was almost impossible.

Rabbi Shlomo Naftali was an energetic, enterprising man, and he opened a printing press for Hebrew books. For a time, his publishing business was quite successful. But in 1834, local Arabs revolted against the Egyptian governor of Palestine, and as part of the rebellion, initiated a vicious pogrom against the Jews of Tzfat. During the riots, Rabbi Shlomo Naftali’s printing press was destroyed, and he was left destitute. At the request of communal leaders, he traveled to Russia and Poland to raise money for the Tzfat community. But while he was in Warsaw, Rabbi Shlomo Naftali heard the terrible news that his entire family – his wife and seven children – had been killed in an earthquake that devastated Tzfat on January 1, 1837.

As a result of this disaster, in which 1,800 people were killed, the Jewish community of Tzfat dramatically declined. On the advice of friends, Rabbi Shlomo Naftali remained in Europe and settled in the city of Pinsk-Karlin. The following year he remarried, and in 1839 had a son, whom he named Yitzchak Yaakov. This boy would be an outstanding educator and leader, paving the way for Orthodoxy in modernity, as a trailblazing leader in Jewish education and Religious Zionism.

Rabbi Yitzchak Yaakov Reines studied in the yeshivot of Volozhin and Eishishok, where he excelled as a Talmudic scholar. He married the daughter of Rabbi Yosef Reizin, the rabbi of Telz and later Slonim, and in 1867 was appointed the Rabbi of Saukenai (Shukian) in Lithuania and soon afterward the Rabbi of Svencionys (Shvintzian). There he began to write and publicize a highly original approach to the study of traditional Jewish texts. This curriculum included general-knowledge topics extrapolated from Talmudic material and other rabbinic sources. But although many of his colleagues welcomed this original approach, some opposed it because it crossed the self-imposed red lines of traditional Orthodoxy.

Undeterred, in 1884, Rabbi Reines opened a yeshivah based on his innovative system. He called the yeshivah Torah VeDaat (“Torah and Knowledge”), and introduced a groundbreaking integrated curriculum which included Tanach, Talmud, halacha and general studies – all aimed at training rabbis who would be firmly rooted in tradition while also able to operate in the rapidly assimilating Russian-Jewish community. But vigorous opposition forced the yeshivah’s closure after four years, and it wasn’t until 1905 that Rabbi Reines was able to reopen his yeshivah, this time in Lida.

In Lida, Rabbi Reines first promoted the idea of embracing political Zionism, a movement led by secular Jewish nationalists actively working towards creating a sovereign Jewish state for the first time in almost 2,000 years. Rabbi Reines had previously been involved with the Chovevei Tzion movement, which promoted Jewish settlement in Palestine. But with the advent of Zionism in the mid-1890s, many rabbis who had eagerly supported Chovevei Tzion became horrified by the prospect of an irreligious Jewish state and openly criticized Zionism and its secular leadership.

Initially, Rabbi Reines remained neutral, and he did not attend the first two Zionist Congresses of 1897 and 1898. But in 1899, Rabbi Reines decided that the issue of Jewish hegemony over Eretz Yisrael was too important to be set aside for any other considerations. He attended the Third Zionist Congress in Basel. Overwhelmed by the experience, he became a devoted and determined proponent of the Zionist cause.

He later wrote that after returning home, a group of his anti-Zionist colleagues came to see him to persuade him to leave the Zionist movement. But Rabbi Reines firmly believed that Zionism was the only way forward for Torah-observant Jews. He was determined to lead an Orthodox group within the Zionist movement that would become a beacon of Religious Zionism. Even the Chofetz Chaim – one of his closest friends – was unable to change his mind, and in 1902 Rabbi Reines formally launched the Mizrachi movement. With Rabbi Reines at the helm, Mizrachi immediately became the exclusive organizational home for Religious Zionists and one of the strongest membership groups within the Zionist movement.

Rabbi Reines passed away in 1915 at the age of 76, but his legacy is broad and deep. Orthodox Judaism was only able to participate in the Zionist project due to his deep commitment to political Zionism. His visionary leadership ensured that at every stage leading up to and then after the creation of the State of Israel, as a direct result of the Mizrachi movement he created, Israel would be a “Jewish” state rather than just a state for Jews.

Rabbi Pini Dunner, Senior Rabbi at Beverly Hills Synagogue, hails from a prominent German rabbinic dynasty that miraculously survived the Holocaust and reestablished itself in London, England. He is an expert on antiquarian Hebrew books and manuscripts, and is frequently consulted by libraries, academics, and private collectors.