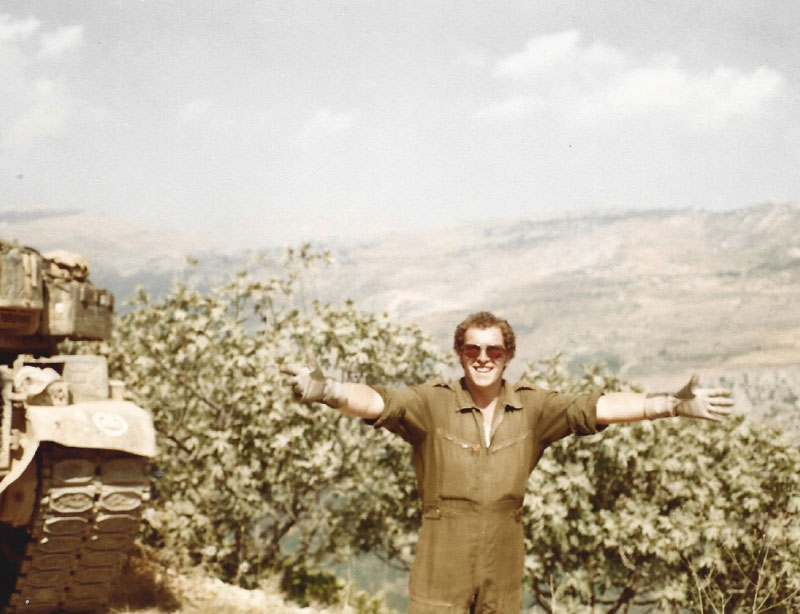 Rabbi Kimche during the war in Lebanon.

After repeated attacks by PLO terrorists operating in southern Lebanon, the IDF launched מִבְצָע שְׁלוֹם הַגָּלִיל, Operation Peace for the Galilee, on June 6, 1982. During what is now known as the First Lebanon War, 654 IDF soldiers were killed and 3,887 wounded. In commemoration of the 40th anniversary of the war and in memory of the holy soldiers who gave their lives to defend our people, we share the following reflections from Rabbi Shlomo Kimche, who served as a tank driver in the war.

Back in 1982, I was a highly motivated IDF soldier. As the first soldier serving in a Jewish army since the Bar Kochba Revolt 1,850 years ago and a son of Holocaust survivors, I bore a strong sense of responsibility on my shoulders. Named for my Uncle Shlomo, murdered at the age of seventeen in Auschwitz, Jewish vulnerability was never far from my consciousness.

I was drafted to a tank unit through my hesder yeshivah, Yeshivat Hakotel. Baruch Hashem, I excelled at every stage, became a tank driver, and was encouraged by my officers to continue on to tank commander and officer courses. For various bureaucratic reasons I wasn’t able to pursue these opportunities, but I raised my eyes to Hashem and said: “OK, I will remain a regular tank driver – but I will try to be the best one the IDF has ever seen!”

I spent every spare moment learning more and more about my tank – an American Patton 6B. I found an English copy of the manufacturer’s instructions and maintenance manual and read it cover to cover. I became such an expert that IDF tank mechanics sought my guidance when they encountered mechanical issues with the Patton tank.

In late May of 1982, we were training at a base in the Golan Heights. Everybody wanted to go home to spend Shavuot with their families, and so we drew lots to decide who would have to stay at the base to guard the tanks during the holiday. I ‘won’ the lottery and was one of only a handful of soldiers on the base that Shavuot. I prayed with a minyan of tanks – though they weren’t impressed with my reading of Megillat Rut!

The following Thursday, Shlomo Argov, Israel’s ambassador to Great Britain, was shot and critically wounded by Palestinian terrorists. Israel was on high alert, but the IDF nevertheless allowed me to go home to my parents in Haifa. Over the course of Shabbat, our phone rang a few times, but we did not answer it. Word soon spread that a war was about to begin, and the IDF was calling up combat soldiers. On Shabbat afternoon, in consultation with Rabbi She’ar Yashuv Cohen, I began packing up my bags to get back to my unit as soon as possible. My parents, who were very worried for my safety, helped me pack. My father gave me a blessing and asked me to take his old spare pair of tefillin instead of my beautiful new pair. I put them in my bag and waved goodbye, not knowing if and when I would see them again.

When I arrived at the base and saw my tank, I hardly recognized it. It had five big new antennas on top instead of one. I learned that the highest officer in command, General Doron Rubin, had to ride in the lead tank so that he could direct the air force, paratroopers, tanks, and infantry. Riding in the lead tank, the commander would naturally choose the most protected vehicle and the best team. That’s how I found myself driving the first tank of Brigade 500 into Lebanon on the 15th of Sivan, June 6, 1982.

Doron was too busy to direct me, and there was no vehicle in front of me to show me the way. Until today I still hear an echo of Doron’s voice shouting at me: Kimche – ata roeh Levanon? – Sa! “Kimche – do you see Lebanon? Go!” I was making the first tank tracks, and the other drivers followed them to avoid mines. I had to decide when to stay on the road and when to go off-road, whether to go over a mountain or around it. My commander was too busy telling everybody else where to go and what to do. Over and over again, I whispered to myself: כִּי מַלְאָכָיו, יְצַוֶּה-לָּךְ לִשְׁמָרְךָ, בְּכָל-דְּרָכֶיךָ, “For He will command His angels on your behalf to guard you in all your ways” (Tehillim 91:11).

Over the next several days, I would grab every opportunity to get out of my tank to lay tefillin, daven and thank Hashem for the many miracles I was experiencing during the war. But my commander, Doron, was not a religious man and pushed me to hurry up. It was war time! 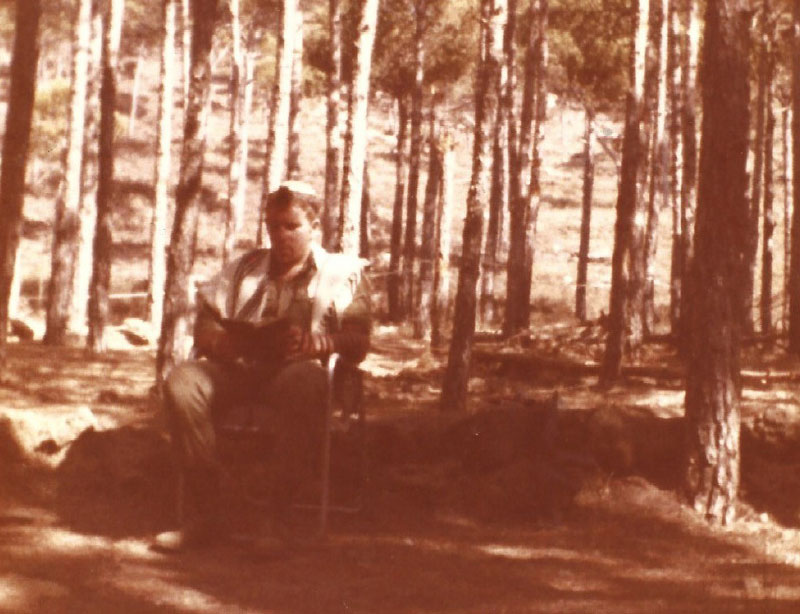 Rabbi Kimche davening with the tefillin in Lebanon.

One morning, when I finished davening, I turned around and realized why Doron wanted me to hurry up. A long line of soldiers was waiting to use my tefillin! There were a few other religious soldiers with tefillin in the battalion, but for some reason the soldiers all wanted to use mine. Like a Chabadnik at Tachana Merkazit, I helped each one say the blessings, lay tefillin and recite Shema.

Day in, day out, soldiers who experienced miracles and survived dangerous battles lined up to use my tefillin. I didn’t understand why this was happening. What was so special about my father’s spare set of tefillin?

Six weeks later, after having no contact with my parents and no way to tell them I was ok, I was able to return home for the first time since the war broke out. When I finally arrived, filthy and smelly, they were in shock. For them it was like experiencing techiyat hameitim, the revival of the dead; they had expected the worst.

That night at the Shabbat table, I told them about some of the many close calls and miracles I had experienced in Lebanon. I also told them about the strange attraction so many of my non-religious IDF friends had to my ‘magnetic’ tefillin. My father smiled, and said: “I never told you where this pair of tefillin came from?”

My grandfather, Avraham Kimche, was a rich businessman in Switzerland at the beginning of the 20th century. In 1914, Rav Avraham Yitzchak HaKohen Kook traveled to Europe to attend the rabbinical convention of Agudat Yisrael, to try and convince European rabbis of the importance of the Zionist movement. Before the convention took place, World War I broke out and Rav Kook was stranded in Europe. Rav Kook traveled to Switzerland, where my grandfather, who understood the great rabbi’s situation, invited him to stay at his home as his guest of honor until the roads reopened. Rav Kook thankfully accepted the offer and stayed in my grandfather’s home, where he learned Torah and wrote books without distraction for the next two years. In 1916, Rav Kook moved to London, but he and my grandfather remained good friends.

Years later, just as the Great Depression was beginning in 1929, my grandfather was swindled and lost all of his fortune. Overnight, he was transformed from a generous philanthropist into a poor man who was forced to receive charity in order to survive. The stress ultimately caused him to suffer a physical and mental breakdown. Hearing of his plight from Israel, Rav Kook sought to help my grandfather. In 1934, the year before his death, Rav Kook remembered that Avraham Kimche had a son – my father, Yisrael James – who was becoming a bar mitzvah. He realized that my grandfather was likely unable to afford a pair of tefillin for his son. And so a few weeks before my father’s bar mitzvah in Switzerland, a special gift arrived from Jerusalem – a pair of tefillin from Rav Kook himself!

“These tefillin,” my father explained, “are the tefillin I wore most of my life. I recently bought myself a new pair, and these became my spare tefillin. I gave them to you because I hoped the merit of your grandfather’s friendship with Rav Kook would keep you safe throughout the war.”

Our Father in Heaven works in amazing ways!

Rabbi Shlomo Kimche is the founder and Senior Rabbi of Yeshivat Bnei Akiva Orot Yehuda Yeshiva High School in Efrat, Rabbi of the Orot Yehuda Community and the Vice Chairman of the Bnei Akiva Educational Network of Yeshivot and Ulpanot.