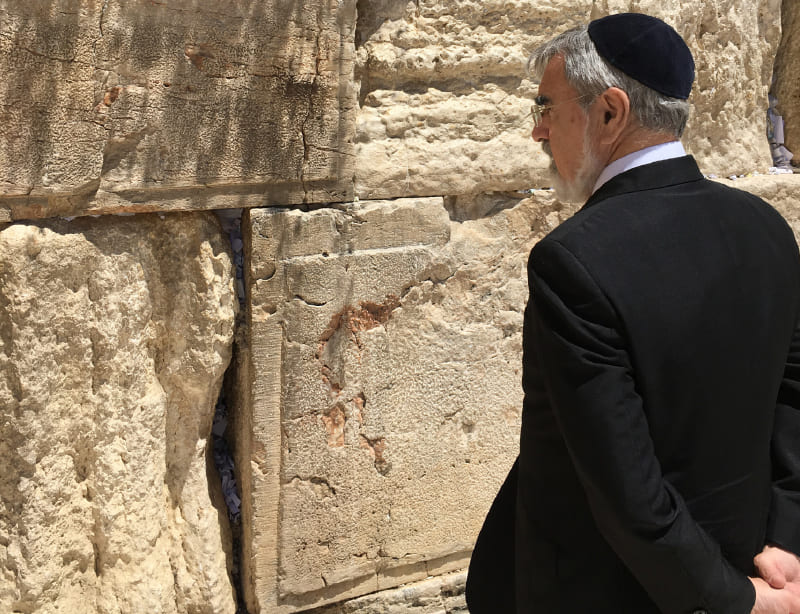 A moment of reflection at the Kotel. (Photo: The Rabbi Sacks Legacy Trust)

The Religious Significance of Israel

The long journey is nearing its close. The Jordan is almost within sight. We have read the long itinerary of stops along the way. Finally, we are reaching the end of the list of encampments, and G-d tells Moshe: “Take possession of the land and settle in it, for I have given you the land to possess” (Bamidbar 33:53). This, according to Ramban, is the source of the command to dwell in the Land of Israel and inherit it.

With this, we come to one of the central tensions in Judaism and Jewish history: The religious significance of the Land of Israel. Its centrality cannot be doubted. Whatever the subplots and subsidiary themes of Tanach, its overarching narrative is the promise of and journey to the land.1 Jewish history begins with Avraham and Sarah’s journey to it. The four subsequent books of the Torah are taken up with the second journey in the days of Moshe. Tanach as a whole ends with Cyrus, King of Persia granting permission to Jews, exiled in Babylon, to return to their land – the third great journey.

The paradox of Jewish history is that although a specific territory, the Holy Land, is at its heart, Jews have spent more time in exile than in Israel; more time longing for it than dwelling in it; more time traveling than arriving. Much of the Jewish story could be written in the language of Parashat Masei: “They journeyed from X and camped at Y.”

Hence the tension. On the one hand, monotheism must understand G-d as non-territorial. The G-d of everywhere can be found anywhere. He is not confined to this people, or that place – as pagans believed. He exercises His power even in Egypt. He sends a prophet, Yonah, to Nineveh in Assyria. He is with Yechezkel in Babylon. There is no place in the universe where He is not. On the other hand, it must be impossible to live fully as a Jew outside Israel, for if not, Jews would not have been commanded to go there initially or to return subsequently. Why is the G-d beyond place to be found specifically in this place?

The Sages formulated the tension in two striking propositions. On the one hand, “Wherever the Israelites went into exile, the Divine Presence was exiled with them.”2 On the other, “One who leaves Israel to live elsewhere is as if he had no G-d”3. Can one find G-d, serve G-d, experience G-d, outside the Holy Land? Yes and no. If the answer were only yes, there would be no incentive to return. If the answer were only no, there would be no reason to stay Jewish in exile. On this tension, the Jewish existence is built.

What then is special about Israel? The Kuzari says that different environments have different ecologies. Just as there are some countries, climates, and soils particularly suited to growing vines, so there is a country, Israel, particularly suited to growing prophets – indeed a whole Divinely-inspired people. “No other place shares the distinction of the Divine influence, just as no other mountain produces such good wine.”4

Ramban gives a different explanation: Though every land and nation is under the overarching sovereignty of G-d, only Israel is directly so. Others are ruled by intermediaries earthly and heavenly. Their fate is governed by other factors. Only in the Land and People of Israel do we find a nation’s fortunes and misfortunes directly attributable to their relationship with G-d.5

The Kuzari and Ramban both expound what we might call mystical geography. The difference between them is that the Kuzari looks to earth, Ramban to heaven. For the Kuzari, what is special about the Land of Israel is its soil, landscape, and climate. For Ramban, it is its direct governance by G-d. For both of them, religious experience is possible outside Israel, but it is a pale shadow of what it is in the land. Is there a way of stating this non-mystically, in concepts and categories closer to ordinary experience? Here is one way of doing so.

The Torah is not merely a code of personal perfection. It is the framework for the construction of a society, a nation, a culture. It is about what Rabbi Aharon Lichtenstein called, in a memorable phrase, “societal beatitude.” It contains welfare legislation, civil law, rules governing employer-employee relationships, environmental provisions, rules of animal welfare, public health, and governmental and judicial systems.

The Torah stands at the opposite end of the spectrum from Gnosticism and other world-denying philosophies that see religion as an ascent of the soul to ethereal realms of the spirit. For Judaism, G-d lives here, on earth, in human lives, interactions, and associations. The Torah is terrestrial because G-d seeks to dwell on earth. Thus the Jewish task is to create a society with the Divine Presence in its midst. Had Judaism been confined to matters of the spirit, it would have left vast areas of human concern – the entire realms of politics, economics, and sociology – outside the religious sphere.

What was and is unique about Israel is that it is the sole place on earth (barring short-lived exceptions like the Himyarites in the sixth century and Khazars in the eighth, whose kings converted to Judaism) where Jews have had the chance to create an entire society on Jewish lines. It is possible to live a Jewish life in Manchester or Monsey, Madrid or Minsk. But it is always a truncated experience. Only in Israel do Jews conduct their lives in the language of the Bible, within the time defined by the Jewish calendar and space saturated in Jewish history. Only there do they form a majority. Only there are they able to construct a political system, an economy, and an environment on the template of Jewish values. There alone can Judaism be what it is meant to be – not just a code of conduct for individuals, but also and essentially the architectonics of a society.

Hence there must be some space on earth where Jews practice self-government under Divine sovereignty. But why Israel, specifically? Because it is and has always been, a key strategic location where three continents – Europe, Africa, and Asia – meet. Lacking the extended flat and fertile space of the Nile Delta or the Tigris-Euphrates valley (or today, the oil fields of Arabia), it could never be the base of an empire, but because of its location, it was always sought after by empires. So it was politically vulnerable.

It was and is ecologically vulnerable, because its water resources are dependent on rain, and rains in the region are always unpredictable (hence the frequent famines mentioned in Bereishit). Its existence could never, therefore, be taken for granted. Time and again its people, surviving challenges, would experience this as a miracle. Small geographically and demographically, it would depend on outstanding achievement – political, military, and economic – on the part of its people. This would depend, in turn, on their morale and sense of mission. Thus the Prophets knew, naturally as well as supernaturally, that without social justice and a sense of Divine vocation, the nation would eventually fall and suffer exile again.

These are, as it were, the empirical foundations of the mysticism of the Kuzari and Ramban. They are as true today as they were in ancient times. There is a directness, a naturalness, of the Jewish experience in Israel that can be found nowhere else. History tells us that the project of constructing a society under Divine sovereignty in a vulnerable land is the highest of high-risk strategies. Yet, across forty centuries, Jews knew that the risk was worth taking. For only in Israel is G-d so close that you can feel Him in the sun and wind, sense Him just beyond the hills, hear Him in the inflections of everyday speech, breathe His presence in the early morning air and live, dangerously but confidently, under the shadow of His wings.