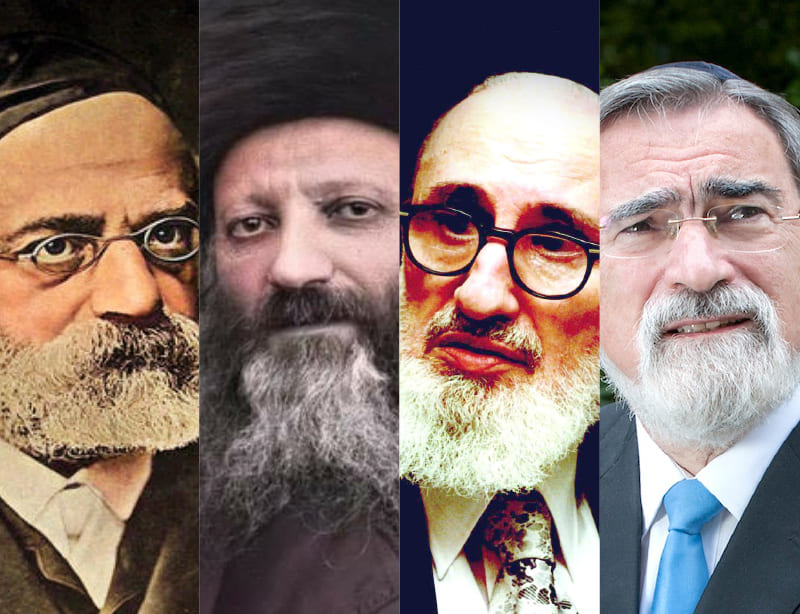 The Sacred and the Secular: Four Role Models of Integration

All were role models in the quest to integrate ancient and eternal Torah values with contemporary challenges. Rabbi Hirsch grappled with Western European secularism, Rabbi Kook with Zionism and national revival, Rabbi Soloveitchik with 20th-century modernity and Rabbi Sacks with globalization, anti-Zionism and the challenges of the postmodern world.

An iconic story expresses what is collectively unique about these four great leaders and why their legacies have made such a profound impact on me. A journalist looking for a scoop once asked Dr. Yosef Burg, Head of Israel’s National Religious Party, a challenging question: “Dr. Burg, in the equation of Dati-Leumi (National-Religious), often used to categorize the Religious Zionist community, which term is more important – dati or leumi, religious or national?”

It was a tricky question. If Dr. Burg claimed that religion came first, the journalist could argue that Zionism was of secondary importance to him and his party; if he replied that the national component of Jewish identity came before Torah, the journalist could argue that Religious Zionists are watered-down religionists. Dr. Burg thought for a moment and replied brilliantly, “Most important is the hyphen that joins them.”

The hyphen represents linkage, integration. Without question, the Torah is the core of our values system, the source of our spiritual life and the foundation of our destiny. Nothing could be more critical. But the Torah is also a Torat Chaim, a Torah of Life, which uplifts our lives while integrating its values in the sweep of the human experience. Torah is relevant to all of life, speaking to all challenges and situations in every generation and epoch.

The hyphen in Dati-Leumi represents that quality of Torat Chaim which can reconcile timeless Torah values with timely modern challenges: religion with nationhood, mesorah with modernity, Torah with technology, universalism with particularism, scientific and spiritual and sacred and secular.

As secularism and emancipation spread across Western Europe in the 1800s, the ghetto walls came tumbling down. Equal rights and greater opportunities beckoned, and many Jews were swept up in the attraction of this newfound freedom. Faced with the lure of the burgeoning secular world, many could not remain loyal to their Torah lifestyle, and acculturation and assimilation began to take root.

Understandably, others responded with segregation. Buttoning down the religious hatches and creating more separated communities was their way to survive the tempests of change. Out of the storm emerged the towering personality of Rabbi Shimshon Raphael Hirsch, a great talmid chacham, a gifted community leader, prolific writer, and an effective activist for Orthodoxy in the Prussian and Austrian Parliaments. He blazed a different trail. A trail of integration which he termed Torah im Derech Eretz. He was able to find many points of coalescence while embracing both traditional Torah learning and secular studies. He welcomed new job opportunities that became available to Jews and believed they did not contradict their deep commitment to a Torah-true lifestyle. In his community, modern secular European life could be reconciled with authentic Torah Judaism.

Rav Kook fully embraced the national revival of the Jewish people and the founding of Herzl’s World Zionist Movement, but did so from a deeply spiritual perspective. It was clear to him that Zionism was not another passing “ism,” but rather a fulfillment of Biblical prophecy, an inextricable part of the redemption process and the fulfillment of Jewish and human destiny.

It was of major significance that Rav Kook, one of the great Talmudic scholars and Rabbinic leaders of his time, embraced the Zionist movement so enthusiastically. After all, he was the outstanding student of the famed Volozhin Yeshiva. Indeed, the Netziv, the Rosh Yeshiva, remarked that the entire existence of the yeshiva would have been worthwhile just to have produced Rabbi Kook.2

Not only could Zionism be reconciled with authentic Torah Judaism, but it was also one of its most genuine modern expressions – the revival of Am Yisrael and the resurgence of its national Jewish identity, which had lain dormant for 2,000 years.

In Rav Kook’s view, the secularism of contemporary Zionism was merely external. At its core, Zionism was pure, expressing a holy people’s longing to return to their holy land and to speak their holy language. Eretz Yisrael, Am Yisrael and Torat Yisrael are complementary parts of a seamless sacred synthesis.

Rav Soloveitchik’s writings, and particularly his Lonely Man of Faith, are masterpieces of integration, offering deep religious expression to both the human and holy components of life. With intellectual brilliance, philosophical genius and gifted articulation, Rav Soloveitchik profoundly validated the dualism of the human experience, famously interpreting the duplication of the story of Creation (chapters 1 and 2 in Bereishit, describing creation in general and the creation of man) as depicting the essence of our dual life purpose.

All at once, Adam feels totally at home in this world and yet entirely alone. He is the majestic man of science and invention, creating and conquering, but also the covenantal man of the spirit, vulnerable and searching for meaning. Simultaneously living in both this world and the next, Rav Soloveitchik’s Adam embraces the positives of temporal life while striving for connection to the Infinite.

Rav Soloveitchik gave eloquent expression to the philosophy of Torah u’Madda3 and the modern Jew’s struggle to live in both worlds while refusing to give up on either. But Rav Soloveitchik also personified the integration of these worlds. One of the gedolei hador and a scion of the Brisk dynasty, Rav Soloveitchik was both an extraordinary Torah scholar and a brilliant academic and doctor of philosophy, integrating both into one complex yet complementary worldview.

Of these four role models, the only one I had the privilege of meeting and knowing personally was Rabbi Jonathan Sacks, and I am grateful to have had the great merit of living in the Rabbi Sacks era.

Rabbi Sacks embodied this life of integration. He was always bridging and blending – G-dliness and morality, science and religion, Halacha and humanism, philosophy and ethics, law and life, unity and diversity, ceremony and celebration, covenant and conversation – playing his part to heal a fractured world. He possessed an unmatched ability to communicate Torah wisdom entwined together with a vast breadth of philosophical scholarship and insight. He had the rare gift of making the most complex ideas seem simple and intricate issues engaging, inspiring and relevant.

Living in a postmodern world caught between the extremes of moral relativism and religious fundamentalism, he taught moderation and morality. When others focused only on individual rights, he championed the ethics of obligation and responsibility, moving from ‘I’ to ‘We.’ As others rejected morality and absolute truths, he stood for objective moral truth, but a truth that is inclusive and accommodating through the dignity of difference.

The reach of his impact was remarkable, extending far beyond the Jewish community. Rabbi Sacks emerged as a voice of moral conscience sought out by prime ministers, presidents and princes, all of whom were drawn to the politics of hope. His life was a continuous Kiddush Hashem, a sanctification of G-d’s name.

He was deeply liberal and pluralistic, yet at the same time passionately particularistic, with a deep love for the Jewish people and our mission. He saw every Jew as a letter in our unique scroll. Pained by the rise of antisemitism, anti-Zionism and the global demonization of Israel, he became a proud and vocal defender of his people and the Jewish State.

We sorely miss Rabbi Sacks, to whom we have dedicated this special edition of HaMizrachi on his first yahrzeit. His teachings, talks and writings will continue to enrich, uplift and inspire for generations. In our generation, the need for Torat Chaim, for integration of Torah and modern life, is as critical as ever. Let us learn from the lives and legacies of these four luminaries as we navigate the challenges and opportunities ahead. They have laid the foundations; it is our job to build upon them.

1 Rabbi Reines also had a great impact and I will write about his unique life and contribution in the next edition of HaMizrachi (Chanukah 5782).

3 This is the motto of Yeshiva University and literally means Torah and Worldly Knowledge/Science but also refers to involvement with the wider society. Rav Soloveitchik served as both the Spiritual leader of Mizrachi in the US and as Rosh Yeshiva of Yeshiva University’s Rabbinic Seminary ordaining 2,000 rabbis and transforming a generation.