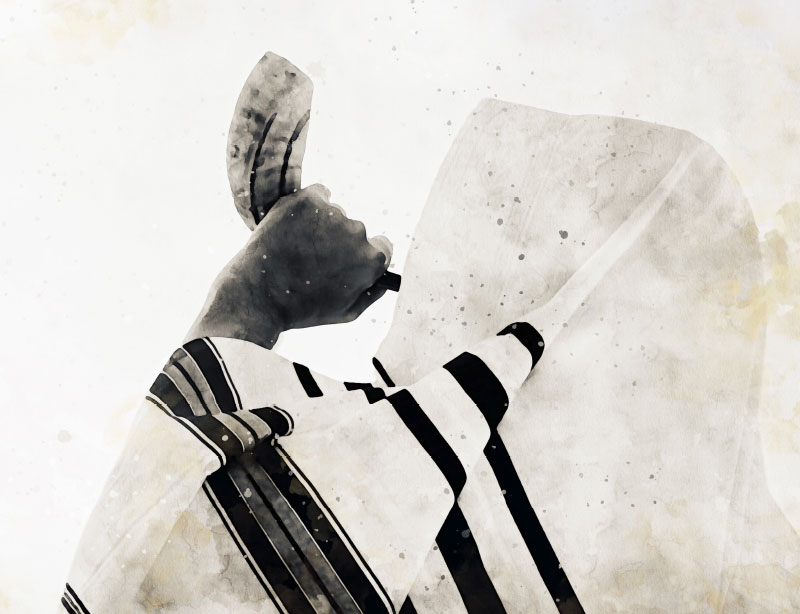 The Three Shofarot of Rosh Hashanah

June 21, 1977, in Jerusalem. The Prime Minister of Israel, Yitzchak Rabin, is relinquishing his office to the opposition leader, Menachem Begin. There is a brief ceremony, many rounds of handshakes and awkward embraces for the cameras, and then Prime Minister Begin turns to enter his new office for the first time. Suddenly, as Yehuda Avner relates in The Prime Ministers, a reporter calls out after him: “Mr. Begin, what does it feel like to walk into that room after so many years in opposition?”

We can ask this same question of ourselves on Rosh Hashanah, as we enter a new chapter in our lives – a new year of opportunity. What does it feel like to walk into this room, on this day?

When feelings are so complex, it is nearly impossible to convey them in mere words. Sometimes we need a musical instrument to express our innermost thoughts, and so we use the shofar to blow the sounds of tekiah, shevarim, and teruah.

But in addition to these three sounds, there are also three possible shofarot to blow, as enumerated in the Shulchan Aruch (Orach Chaim 586:1): “The mitzvah of shofar on Rosh Hashanah is with a bent ram’s horn.” Ideally, we should use the horn of a ram for the mitzvah of shofar, and one that is twisted and bent rather than straight. But what if none is available for use? “If that is not possible, all shofarot are usable, whether straight or bent; but bent is preferable to straight.” One still fulfills the mitzvah of shofar using the horns of other kosher animals, whether bent or straight.

On Rosh Hashanah 1933, Rav Kook delivered a powerful sermon in the Old City of Jerusalem, reflecting on the three Divine calls summoning the Jewish people to be redeemed and to redeem their land. With Germany growing more threatening under Hitler’s reign, and with immigrants streaming to the Land from Europe while facing new hatred from rioting Arabs, it was a tumultuous and frightening time. And so Rav Kook asked the people: which shofar’s sound do we hear at this time? Which level of shofar will we use to usher in our redemption? The ideal, the satisfactory, or the absolute last resort?

We also live in uncertain times, and so nearly ninety years later we can also ask ourselves: which shofar animates our lives and propels us into action?

Let us begin with the most unfortunate possibility. The least desirable shofar comes from the horn of a non-kosher animal. This shofar corresponds to the wake-up call that comes from persecution by other nations, when we are driven to action by the piercing siren of fear. This is the shofar of affliction. This is the shofar that unites the Jewish people because of antisemitic threats. This shofar produces results, but only because it drives us to “flee from” danger instead of “running towards” redemption. There is no blessing made on such a shofar, for “we do not make a blessing on the cup of persecution” (Berachot 51a).

This is not the shofar we hope to hear. We don’t want to act out of fear! Yet we are too motivated to act thinking “it would be bad if we didn’t” instead of “yes, this is the right thing to do”. Ideally, we should not act in response to the shofar of negativity and affliction.

Fortunately, there is a better shofar to be used. The horn of any kosher animal, if it can be hollowed out, is suitable for the mitzvah of shofar. The one who hears its sound is motivated by something much more positive: the desire to serve G-d, to be part of a community devoted to Torah and mitzvot. This shofar blast causes the Jew to ask: Did I do enough to satisfy my obligations? Have I minimally met the demands placed on me by the Torah? If yes, I am completely satisfied.

The “good enough” Jew also exhibits selective aspirations, because “good enough” does not satisfy him in other areas of life. He does not accept “good enough” when striving for a promotion at work, choosing a doctor or ordering an expensive steak at a fancy restaurant. “Good enough” is only good enough when it comes to religion.

But there is a third and final shofar whose cries we can choose to hear. The preferred shofar of redemption is the Divine call that awakens and inspires us with the excitement and electricity of being selected by G-d to receive a unique and special mission on Earth. This is the shofar of the ram – and only the ram – because it binds us to the actions of Avraham Avinu whose supreme love and dedication for G-d became evident at akeidat Yitzchak (Rosh Hashanah 16a).

On Rosh Hashanah, we model the shofar of idealism, of reaching for the stars. One who hears the sounds of the ram’s horn is animated by a quest for the best possible life. This is the shofar blast that echoed through the generations and inspired Ramban, Rabbi Yehuda HaLevi, Rav Ovadia MiBartenura, the students of the Vilna Gaon, and the disciples of the Baal Shem Tov to ascend to Eretz Yisrael.

The shofar of Avraham is a call to action based on the principle of limitless potential. When we hear the sound of the ram’s horn, it awakens us to aspire for growth, both individually and nationally. The call of the ram’s shofar resonates in those who envision themselves in Avraham’s shoes, journeying to a new place at G-d’s bidding, ascending a mountain, saying “hineni”, “here I am”.

Of the three possible shofarot, to which call will we respond?