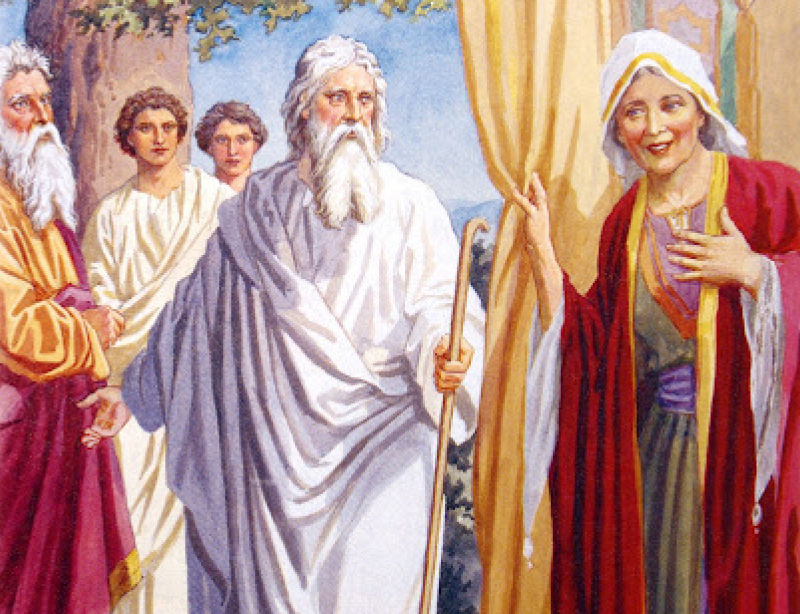 A depiction of Avraham and Sarah with the three angels (Photo: Public Domain)

The Ultimate Goal in Having Children

The late Jeopardy host Alex Trebek famously used to remind his guests to phrase their answers in the form of a question. But it would not make sense for anyone to ask a second question when their first question remains unanswered.

After Avraham rescues his nephew Lot and helps the five kings vanquish the four kings, Hashem appears to Avraham and promises him a great reward (Bereishit 15:1).

The next verse begins with the phrase Vayomer Avram: Avraham asks Hashem, “What will You give me, as I am childless, and the possessor of my house is my servant Eliezer.”

Immediately after this, we do not find an answer from Hashem, but rather another question from Avraham: Vayomer Avram “And Avram said.”

Avraham rephrases his issue: “You have given me no seed,” and the only one to inherit him will be his servant, Eliezer.

Why do two consecutive verses begin with Avraham asking Hashem a question with no response in between and why do the two verses seem to ask the same question?

In his commentary Ha’Emek Davar, the Netziv explains that Hashem did not answer Avraham’s first question, which Avraham then realized was an inappropriate question, as Hashem had already promised him offspring. And so Avraham rephrased his question, clarifying the intent of his initial challenge to Hashem. Avraham is already old, so even though he is sure that Hashem will keep His word and provide him a child (banim), he has not given him zera (“seed”).

Avraham, sensing his mortality, is concerned; even if he has a child in his old age, he will not be alive to raise the child properly! If Avraham dies, his future child may inherit his possessions, but his servant Eliezer will raise his child! In other words, Avraham is saying to Hashem: It will be wonderful to have a child, but if I cannot raise him in the ways of Hashem, what’s the point?

More than anything else, Avraham wanted the opportunity to raise his son, for which Hashem later praises him: “For I have known him, to the end that he may command his children and his household after him, that they may keep the way of the Lord, to do righteousness and justice…” (Bereishit 18:19).

Avraham’s ultimate goal, and indeed our task as members of the Jewish nation, is not only to have children but to raise those children with the proper Torah values of righteousness and justice. Our goal is to raise children who will serve Hashem, fulfill the Torah and mitzvot, and build a holy society in Eretz Yisrael.

In this ever-important task, we are guided by our rabbis and community leaders.

Great leaders whom we are mourning this year, including Rabbi Jonathan Sacks, Rabbi Dovid Feinstein, Rabbi Gedalia Dov Schwartz, Rabbi Dr. Abraham J. Twerski, Rabbi Norman Lamm, and Rabbi Adin Steinsaltz, were concerned, first and foremost, with raising the next generation of Am Yisrael in the ways of Torah and mitzvot.

Although they are no longer with us, their teachings continue to inspire us to follow in the path of Avraham Avinu.

As Avraham expressed so long ago, this is our hope and our yearning, above all else.

Rabbi Yonatan Shai Freedman is the Overseas Alumni Coordinator at Yeshivat Har Etzion. His database of Divrei Torah can be found at VortFinder.com.