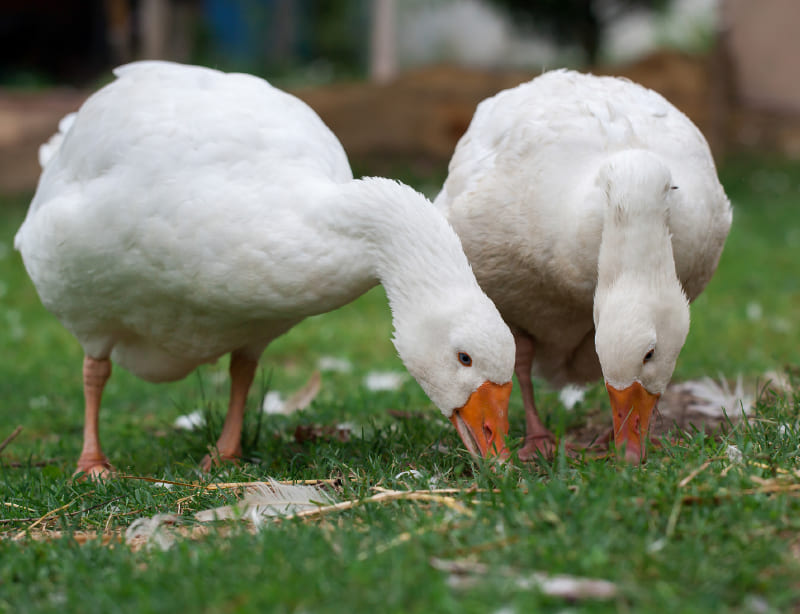 The Wisdom of Goose Fat

In Eastern European communities before the war, preparation for Chanukah and Pesach began at the very same moment. On Rosh Chodesh Kislev, 30 geese were stuffed into a small cage so they could not move. They were fattened for the next three weeks (given little water but much food) until the shochet came at sunrise on the 21st day. He said a special prayer, slaughtered the geese, plucked, kashered, and most importantly, rendered them for goose fat. This fat was split into two parts. One part was for the winter, but especially for Chanukah. In those days, latkes consisted of buckwheat flour fried in goose fat, not potatoes in olive oil!1 The second half of the goose fat was set aside for Pesach, when the usual kitniyot oils could not be used. In some houses, only days before Chanukah, part of the kitchen would be kashered for Pesach as kosher-for-Pesach containers were brought out to store the goose fat.2

Although all this was done for purely practical reasons, a story in the Gemara adds a layer of depth to this minhag. Amongst the legends of Rabbah bar bar Channah (Bava Batra 73b) is a story about some particularly fat geese.

Rabbah bar bar Chanah said: Once, we were traveling in the desert and we saw geese whose wings were drooping because they were so fat, and streams of oil flowed beneath them. I said to them: Is there a portion of the World to Come in you? One raised a leg and one raised a wing. When I came before Rabbi Elazar, he said: In the future, Israel will be held accountable for them.

Rav Kook explains this mysterious story in his Ma’amarei Ha’Raya. The goose is a Talmudic symbol for the wisdoms of the world.3 These wisdoms have the potential to be sanctified in the service of G-d, but they have been handed over to the nations of the world, and they are not currently being used for G-d.

Now let us understand the parable. The travelers were in the desert, far from Torah, and met the world’s wisdoms, represented by the geese. These wisdoms had grown huge and fat on all the knowledge they had acquired, but their learning had not brought them closer to G-d. On the contrary, their wings drooped down to the ground. Rabbah bar bar Channah asked them if it was possible to use their knowledge to earn a portion in the world to come. They lifted a leg and a wing to indicate that, yes, it was still possible to elevate this knowledge. Rabbi Elazar then told him that not only is it possible to advance this knowledge in the service of G-d but that the people of Israel must do so to bring the final redemption.

What is the more profound link between goose fat, Chanukah, and Pesach? On Chanukah, the Greeks threatened to overwhelm us with their wisdom and culture, and so the Maccabees tried to expel Greek wisdom altogether from the people of Israel. During that difficult time, our people’s self-preservation left us no choice but to utterly reject Greek wisdom. However, rejecting Greek wisdom entirely will not bring us to the final redemption in the long term. And so on Pesach we yearn for the final redemption, when we will lift up and sanctify worldly wisdom – our cherished ‘goose fat’! – and use it in the service of G-d. May it come speedily in our days!

Hannah Abrams is a Mizrachi UK Fellow, and will be going to the UK on shlichut in 2023. She is a participant in Mizrachi’s Shalhevet leadership program and is learning at Matan’s Advanced Halakhic Institute.