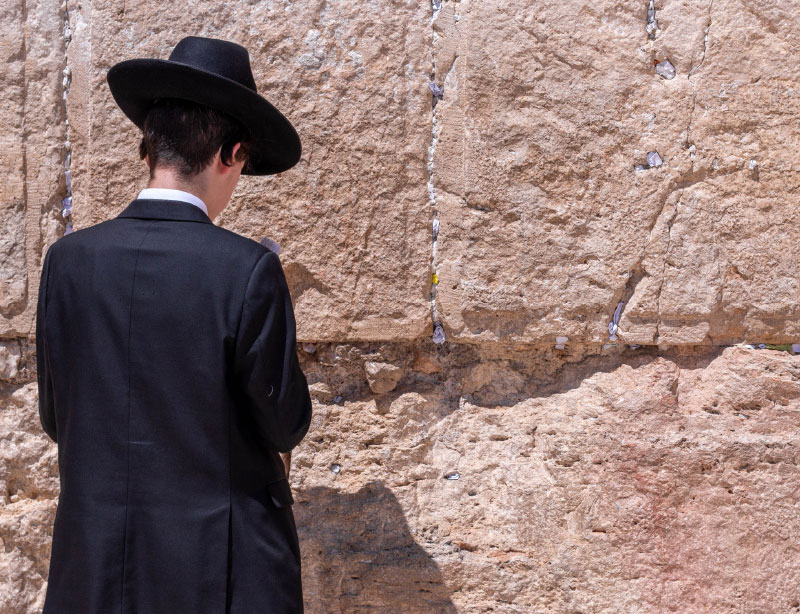 The Cornerstones of Charedi Culture

We live in an age of ideology. Seismic shifts in Jewish history over the past two hundred years have produced a wide range of ideological camps, creating fissures that didn’t exist in the past and probably will not exist in the future. In our modern Jewish reality, these ideologies offer differing responses to major questions such as the founding of the State of Israel, the Holocaust, and the challenges of modern culture.

In addition to ideological prisms, the different Jewish communities have developed unique cultures and customs. Setting aside its ideological beliefs, what are the bedrock values and strengths of Charedi culture? How can people who don’t live in these cultures better appreciate these values and incorporate them into their own communities and personal lives?

In this essay, I will not address the significant ideological question regarding the State of Israel and focus solely upon Charedi culture. Additionally, I will only assess the culture of Israeli Charedi society. Though many people in the Diaspora identify as Charedi, their economic and cultural conditions and their lifestyles are vastly different from those of Charedim in Israel. Lastly, my observations are those of an onlooker; I do not personally live in the Charedi community.

Every Jewish male is obligated to study Torah, and to form his identity based on G-d’s word and will. Thankfully, in recent generations, we have extended the value of serious Torah study to women as well.

Ideally, when freed from other responsibilities, each of us should dedicate our time and energies to serious Torah study. So it was in the perfect world of Gan Eden, and so it will be in the perfect word of Olam Haba. The Rambam describes the next world as one in which all obstacles and distractions from drawing close to G-d will be removed, a place where the righteous “sit with their crowns on their heads” enjoying the Divine light.

How should we respond to the crushing reality that we aren’t naturally “available” for full-time spiritual experience? The issue was debated between Rabbi Yishmael and Rabbi Shimon bar Yochai (Berachot 35b). The former adopted a practical approach, endorsing human industry even at the cost of full-time Torah study. He recommended that a person submit to the normal work routine – and study Torah with whatever little time remains.

Rabbi Shimon bar Yochai responded in shock: “if this routine is widely applied what will become of Torah excellence, which demands relentless and colossal investment?” Instead, Rabbi Shimon advocated a life of complete and comprehensive commitment to Torah study, while relying upon Hashem to provide material needs. Though the Talmud doesn’t rule in favor of either opinion, it notes that Rabbi Shimon’s approach is harder to reproduce. It takes courage, passion and the willingness to submit to a life of financial hardship and uncertainty.

For most of our history, this question wasn’t a burning communal issue, as most Jews barely eked out a living and simply struggled to survive. Beginning in the 18th century, as European nations removed many of the discriminatory laws preventing Jews from integrating into society, the equation changed dramatically. Many Jews embraced these new financial opportunities and the material comforts that soon followed.

At the same time, a new Charedi culture emerged which rejected professional and financial advancement to preserve time and resources for Torah study. For the first time, the debate between Rabbi Yishmael and Rabbi Shimon began to play out on a national scale. Charedi culture adopted Rabbi Shimon’s heroic agenda, choosing a life of poverty for the sake of immersion and, hopefully, excellence in Torah. In our own time, the Charedi community – men, women and children – is dedicated to supporting and excelling at Torah study. Unsurprisingly, this has resulted in an explosion of Torah study and accomplishment.

How do we make decisions? Torah authorities make halachic decisions and moral decisions should also be guided by religion. What about areas of life that are not fully guided by halachah or moral considerations such as marital choice, finance, and medical treatment? Though many believe these matters may be left to each individual’s free will, the doctrine of da’as Torah assumes great Torah scholars possess almost supernatural insight which should guide Jews in every area of life.

While many people recoil from ceding their free will to others, da’as Torah is a throwback to a bygone era of prophecy, when supernatural insight was widely accessible. In that era, our people balanced their own free will with higher truths delivered by prophets. Da’as Torah assumes that even now, when we do not have prophecy, a surpassing mastery of Torah enables qualified individuals to access supernatural truths – truths which should guide one’s personal decision-making.

Modern culture has become vulgar and overpowering. Every religious person must filter out the wholesome from the crass, and select the meaningful from the empty. Charedi culture applies a harsher filter by creating an insular society that is disconnected from the surrounding culture. Whereas non-Charedim filter, Charedi society insulates.

Charedim protect their society by banning devices which access broader media and by vilifying secular culture as a foreign and harmful element. Charedi culture has also created its own “cultural stream” through independent news outlets, magazines, and media, thereby lessening dependency upon broader cultural sources.

“Cultural disconnect” doesn’t just filter out unhealthy messages and media, but builds a societal barrier between the Charedi world and the broader population, further limiting unhealthy cultural influence. In today’s world of endless media, we all have to “screen” the culture we enjoy. Charedi society screens more aggressively.

In a society which deemphasizes professional advancement and broader cultural engagement, it is only natural for family life to become paramount. Charedi families tend to have more children due to strict policies about birth control, and their many children usually stay close to home. As most Charedi boys don’t serve in the army or attend university, they either live at home or in yeshivah dormitories, where they remain attached to their families. Girls live at home until marriage.

Even after marriage, extended families live in close proximity to one another. For the sake of cultural insulation, most Charedim choose to settle in Charedi-dominant cities. Because of these factors, children usually remain deeply connected to their families and involved in each other’s lives, and their family is their bedrock of support, chessed activity and community.

The family-centered culture of the community is one of the most underappreciated elements of Charedi culture. Family support is critically important to psychological well-being and also increases chances for success in life. In an age of widespread family dysfunction, it should not be difficult to appreciate the Charedi emphasis upon family life.

Charedi society imposes strict “social coding” which governs areas such as dress, gender interaction, social settings, dating, political alliances and many other aspects of human experience. Though some of these codes are driven by halachic concerns, many of them are social instruments meant to create conformity and belonging.

Human identity is always a blend of conformity and authenticity. To redeem ourselves from solitude we enter the union of larger communities. However, membership in larger groupings requires individuals to constrain some of their personal expressions to abide by the larger customs of the collective. If our society demands too much conformity, we are forced to abdicate personal expression and individual identity. If there is too little conformity, we are left alone. Charedi culture is willing to pay the price of personal authenticity to achieve a larger payoff of social belonging and, hopefully, stronger religious commitment.

People often remark that a particular person “isn’t so religious, he is more modern”. But why is the word “modern” the antonym for “religious”? It is a lazy and even harmful use of terminology, as it demonizes anything new and modern as hostile to religion. Modernity is irrepressible and cannot be halted. It provides new tools which empower us but also poses hidden risks which can harm us. Each person must decide how quickly to adopt modern tools or how long to wait on the sidelines, until the unseen dangers are better understood.

Charedi culture chooses to delay its adoption of technology until the hidden dangers can be better assessed and hopefully curtailed. They pay a price for not employing these tools, but they receive the benefit of better understanding the unknown hazards. Eventually, everyone – even Charedim – will use a smartphone. But those who delay its adoption can better safeguard themselves until the technology becomes absolutely vital.

Fifteen years ago, during a plane flight, a Chassid who knew little about computers asked me about the internet. After describing the technology, I cautioned him that, in twenty years, he would not be able to pay his bills without the internet. He looked at me wisely and said “yes, but at least I will benefit from twenty years of safety”. I had initially thought I was sitting next to a caveman. I now realized that he was sitting next to a guinea pig. I would experiment with new technology, discover the hazards and create a roadmap for his eventual adoption. Who would meet with better success – the caveman or the guinea pig? Again, it is hard to decide. 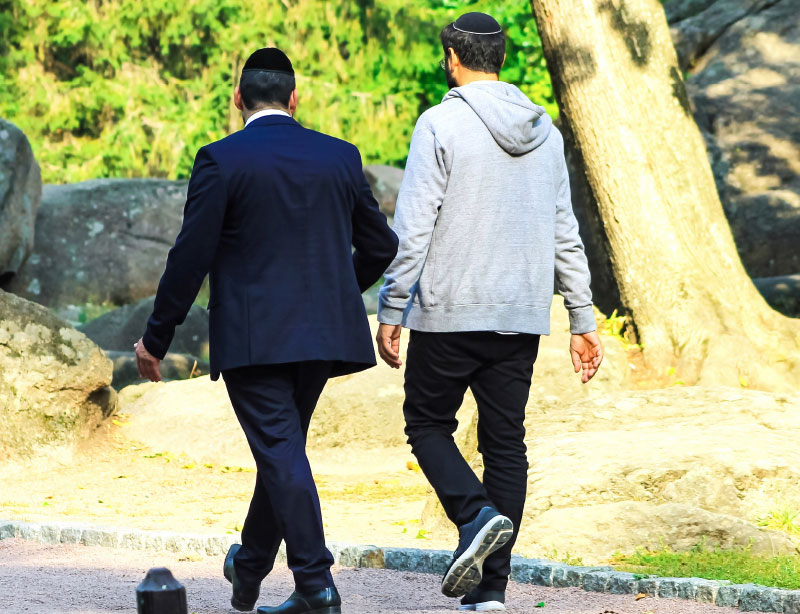 Community is where we live – but identity is who we are. No Jew should ever be labeled or label themselves as Charedi, Religious Zionist, Modern Orthodox, or any other communal designation. We should all aim for one common identity: to become ovdei Hashem, passionate and committed Jews. Labels are a poor man’s substitute for actual identity. It is easier to stamp yourself as a particular “type” of Jew than it is to actually construct religious identity through the experiences which truly matter: Torah study, mitzvah performance, chessed, piety, moral behavior, prayer, love of Jews and love of country. Identity should never be based upon a label.

Independent of identity, each of us must decide which community best enables the type of life we seek. No communal mode is perfect; each possesses flaws and opportunities. True perfection can only be attained independently of communal labels and cultures. Do not confuse identity with community, and do not live identity through communal or ideological labels.

We are all Ultra-Orthodox

Many people translate the term “Charedi” as “Ultra-Orthodox”. This is an incorrect translation with potentially devastating consequences. Every Jew, regardless of which community they live in, has a religious responsibility to become “Ultra-Orthodox” – to fully and passionately devote himself or herself to G-d. Each of us should choose the community that will help us accomplish this all-important goal. If you believe that a Charedi lifestyle will better help you achieve religious growth, you must absolutely join that community!

Rabbi Moshe Taragin has taught at Yeshivat Har Etzion since 1994. He previously taught Talmud at Columbia University and Yeshiva University, and served as Assistant Rabbi at the Fifth Avenue Synagogue. Rabbi Taragin is the author of the popular online shiur “Talmudic Methodology” and he co-wrote the commentary for the The Krengel Family World Mizrachi Edition of the Koren Yom HaAtzma’ut Machzor.