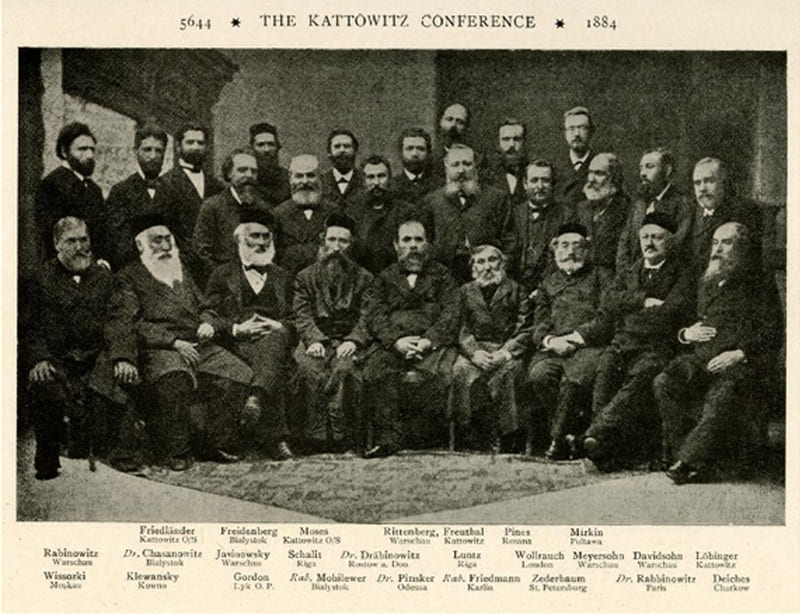 Participants of a convention of Chovevei Tzion groups in Katowice in 1884 assembled to address the need of a Jewish state. Seated in the center of the front row are Rabbi Shmuel Mohilever and Dr. Leon Pinsker. (Photo: Wikimedia)

Incredibly, barely 50 years after Herzl’s founding of the modern Zionist movement, the Jewish people succeeded in establishing a sovereign Jewish State. It was an extraordinary achievement, and the result of the commitment by Zionists from all over the world to the collective return of the Jewish people to the Land of Israel.

From the very beginning, religious Jews were faced with a dilemma: should they be part of a movement led by people espousing values often at odds with Torah Judaism? Could the secular Zionist movement become a spiritual and sacred enterprise?

Despite facing skepticism and opposition from many leading Orthodox figures, a group of Eastern European rabbis, led by Rabbi Yitzchak Yaakov Reines, believed that Zionism could be transformed into a holy movement. They believed that the body of the movement could only be sustained by a soul, and that they could and must strive to build bridges – between national and religious, physical and spiritual, Jewish and democratic. Mutual fate could most certainly be transformed into spiritual destiny.

They believed that the only way to make an impact was from within. And so in 1899, the brilliant Rabbi Reines formally joined the World Zionist Organization and became a delegate to the World Zionist Congress. This could not be overlooked by his rabbinic colleagues, as Rabbi Reines was recognized as one of the Gedolei Yisrael, the great Rabbis of his generation. He was head of the Beit Din of Lida and renowned for his intellectual genius and pious character. Yes, there were other Rabbis already present at the first Zionist Congress in 1897, but Rabbi Reines’ stature and charisma brought greater religious gravitas to the movement.

Exceptionally thorough, Rabbi Reines had studied Herzl’s personality and the organization he founded for two long years. When he was convinced Herzl deeply cared about the Jewish people and wanted the Zionist Movement to be a unifying force, he threw his full weight behind it, emerging as one of the prominent leaders of the movement.1

The culture controversy and the founding of Mizrachi

Events at the 5th Zionist Congress in 1901 irrevocably changed the Zionist Movement from within, dividing a unified movement into separate parties and factions. Followers of Achad Ha’am’s philosophy of cultural Zionism sought to introduce secular cultural values into the movement’s mission. To that end, they founded a separate party, The Democratic Faction, to champion their cause.

Both Herzl and Rabbi Reines vociferously opposed the move. As long as Zionism focused on material and practical goals such as political activism and support of the settlement enterprise, all Zionists could be united. They understood that if the movement would segue into cultural and religious issues, it would lead to divisiveness. Nevertheless, despite their opposition, the Congress voted to include secular culture and education as part of the movement’s purview.

The religious faction within the movement was faced with a painful dilemma. How could they remain committed to a Zionist movement that was explicitly committed to secularism?

Some did indeed leave, eventually helping to found Agudath Yisrael. However, Rabbi Reines and many others agreed they must find a way to stay in the movement without compromising their values and religious authenticity. To achieve this, they created their own distinct faction within the Zionist movement.

On 25 Adar I 5662 (March 4, 1902), Rabbi Reines and 70 colleagues founded the Mizrachi Movement. Mizrachi is an acronym for merkaz ruchani, a “spiritual center,” and its mission was to synthesize modern Zionism with Judaism’s age-old spiritual mission. Within two years, Mizrachi grew meteorically to 120 new chapters across Europe, and a Religious Zionist revolution had begun.

A paradigm for Jewish unity: the four species

Like other groups and federations within the Zionist movement, Mizrachi was independent yet integrally involved in the broader Zionist Movement. Rabbi Reines was asked about the rationale (both logical and halachic) of such a framework. How could they be independent and interdependent simultaneously?

Rabbi Reines responded with a remarkable insight. The mitzvah of the four species, the Arba’a Minim, is understood by our Sages to symbolically represent unity between different types of Jews.2

While the etrog has both a fine taste and a pleasant aroma, representing Jews committed to both Torah and good deeds, the other species possess only one or neither of these qualities. Rabbi Reines explained that the way the four species are held and waved highlights the Torah’s formula for achieving Jewish unity. The etrog is not bound up with the other three species, which are all tied together. We hold the etrog in one hand and the lulav, hadas and arava in the other. And yet, on its own, the etrog serves no purpose. To fulfil the mitzvah of the four species, we must hold our two hands together and wave the etrog together with the other three species.  Only when the etrog is held together with its fellow species, as one unit, is the mitzvah fulfilled.

Like the etrog, religious Jews must remain independent and separate in order to uphold the integrity of Torah values. But at the same time, if we are not interdependent and integrated with the rest of the Jewish people, we have no individual value. Our lot must be bound up with that of all Jews.3

The Mizrachi Movement’s unique stance of partnership within the World Zionist Movement was based on a similar trail of partnerships blazed in earlier decades. From 1882–1897, in the 15 years before the official founding of the Zionist Movement, Jews from all over Europe founded Chovevei Tzion (Lovers of Zion) fraternities dedicated to settling and supporting Jews in Eretz Yisrael. In 1884, at a conference in Katowice, these fraternities joined together to create a centralized movement led jointly by Dr. Leon Pinsker and Rabbi Shmuel Mohilever. Dr. Pinsker was an acculturated secular Jew, while Rabbi Mohilever was one of the great rabbis of Eastern Europe, serving as Chief Rabbi and head of the Beit Din in Bialystok. Rabbis, lay leaders and Jews of all types – secular, traditional and religious – forged a union for the sake of a greater good.

In 1893, challenges arose and the organization split into two separate yet still affiliated centers – one in Odessa, run by the more secular Jews, and one in Bialystok, led by Rabbi Mohilever. The latter was named the Merkaz Ruchani, or Mizrachi for short. And so a decade later, Rabbi Reines and his colleagues, perpetuating the same ideology as Rabbi Mohilever, chose the same name.4

The path of partnership and commitment to a collective fate and destiny, originated by Rabbi Mohilever and continued by Rabbi Reines, still drives Mizrachi today. It is a concurrent and complementary commitment to Am Yisrael, Eretz Yisrael and Torat Yisrael!

At the core of this trailblazing path is an unswerving belief in the immeasurable value of the Jewish people as a whole and the necessity of collaboration and partnership with other groups within our nation. It is an authentic commitment to loving our fellow Jews, developing camaraderie and an attitude of mutual responsibility.

Once deep common bonds are established, we can and must make the effort to shape a combined destiny. The values of our Torah are the essence of our existence, the soul of our collective body, our spiritual center. The Land and the State of Israel are an inextricable part of our destiny. With a deep and unshakable belief in a common journey that must be traveled together, we can overcome any challenge, however large. Seemingly irreparable ideological differences can be reconciled along a common path.

With dedication and creativity, we must somehow find a way to retain our authenticity, independence and integrity while being committed to our collective national mission. This has been our Mizrachi mission for our first 120 years and one we remain deeply committed to today.