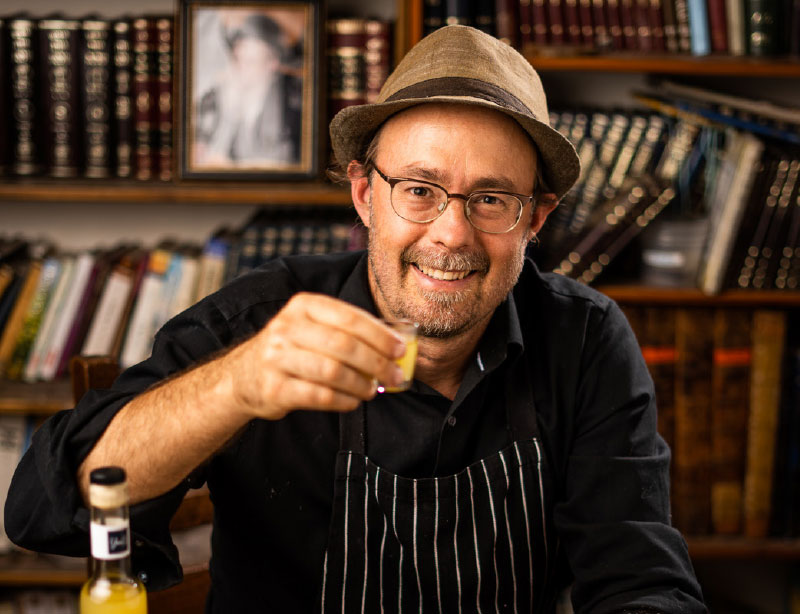 Two Feet In: A Conversion Story

In a famous Talmudic story, a gentile asks a Jewish sage to convert him as he learns the entire Torah while “standing on one foot.” I always assumed this meant the convert wanted to study with his other foot suspended mid-air, too impatient or shallow to open a book or join a yeshivah.

But what if that isn’t what he meant? What if a convert wants to learn Torah with the other foot not suspended, but still grounded in the world from which he came? Not because he is impatient nor ambivalent, but because he is honest about where he stands?

That question is on my mind, 35,000 feet above the ground, on an El Al flight from Toronto to Tel Aviv, after a week filming my mother for a documentary I am making about the lives of converts and their families. It is a personal question.

In the late sixties, my father, an atheist American Jew, took a gap year to study literature in the West German city of Tubingen. There, he met my mother, a 20-year-old German Catholic. “Before I met your father,” my mom told me, “the only Jewish man I had ever spoken to was Jesus.” She laughed. “I suppose your father was the second Jewish man I loved.”

“Do you know what you’re getting into?” my concerned grandfather asked my mother before she boarded the plane. “Don’t get me wrong. We like Mark and have nothing against his being Jewish. It’s just that you are a German. And I wonder if you understand what that means to American Jews.” “In retrospect,” my mom told me, “Opi was right. I had no idea what I was getting into. Life as a German in America was much more complicated than I imagined possible. But if it was a mistake, it was the best mistake I ever made.”

A decade later, my mom convinced my dad that they should raise their three children as Jews.

“Are you sure you want to do this?” he asked, largely indifferent to organized religion. “Children deserve a culture, an identity,” she responded. “I would be adrift without my religious upbringing. I want my children to have access to religious literature, music and the memories of faith.”

I once asked my mother why she didn’t raise us Christian. “I was disillusioned with the Church,” she said. But why didn’t she convert to Judaism herself? “I didn’t believe in G-d, and I respected Judaism too much to lie.” She remained faithful to who she was, unintimidated by the paradoxes. An expat German raising Jewish children.

“Your Judaism is my gift to you,” she told me when I graduated high school and was boarding a flight to volunteer on a kibbutz in Israel. “What you do with it is your decision.”

I fell in love with Israel that year. At first it was the depth of national and historical identity that hit me. Then I went looking for the tradition, and joined a small yeshivah hoping to remedy my ignorance. I didn’t mention that my mother was not Jewish – I didn’t want any trouble.

After college, I returned to Israel, this time to study Torah more seriously. I began to be more interested in faith and wanted to learn Talmud. I told my Israeli rabbi after I arrived that I wasn’t halachically Jewish, and he suggested I convert, but I didn’t want to. “I grew up Jewish and my Torah learning is a search for depth within myself,” I said. “I don’t mind being complicated; I’m not looking for a new identity.”

“Judaism recognizes only matrilineal descent,” he insisted. “If you just want to learn Torah you can go to university or become a Reform rabbi. But if you want to continue studying in yeshivah you will have to be fully Jewish, with both feet in.”

I was too much in love with Torah learning to walk away and I agreed to convert. When I emerged from the mikveh and the judge wished me a mazal tov, he added, “you are now born again!” I wanted to deck him. “Born again?” I muttered. “I am doing this to become who I already am.”

Rabbi Joshua Weisberg teaches Talmud, is a professional chef, a documentary filmmaker and a tour guide. He lives in Jerusalem with his wife Chana Jenny and their eight children.

Homemade Hummus with Lamb and Walnuts

Hummus is the quintessential Yom HaAtzmaut food, so much so that the day’s news broadcast opens with a boast of how many kilograms were sold in anticipation of the traditional Independence Day “mangal” barbecue.

Most Israelis have strong opinions about what and who makes the best hummus. Here is my contribution to the debate – a hummus with a rich flavor, served with a flavorful sweet lamb and nut sauce. 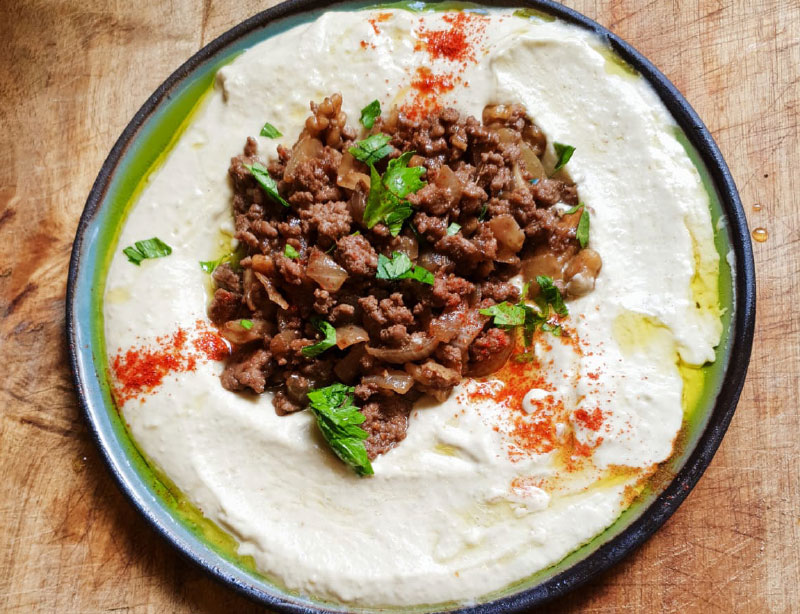 Salt and pepper according to taste

In a large bowl, cover the chickpeas with at least 2 inches of water, add the baking soda, cover, and let soak overnight. The chickpeas will more than double in size.

Move the chickpeas to a medium size saucepan. Cover them with water, add a carrot, an onion and the 6 cloves of garlic and simmer until the chickpeas are very soft.

Place the chickpeas, ½ cup of the broth, the carrot, onion and the garlic cloves in a food processor. Add the  ¼ cup of raw tahini, ¼ cup olive oil, and  ¼ cup fresh squeezed lemon juice. Puree until creamy smooth. Add salt and pepper according to taste.

Ingredients for Lamb and Walnut Sauce

A half pound of ground lamb (or ground beef)

Salt and pepper according to taste

Instructions for Lamb and Walnut Sauce

Saute the onions and the garlic until translucent.

Add the walnuts and sauté for an additional two minutes.

Add the ground meat and sauté until the meat is no longer red.

Add the silan, salt and pepper and stir for another minute.

Place a cup of the hummus (preferably warm or hot) on a large plate with a rim. With a large serving spoon, flatten the middle of the hummus so that it is indented. Fill the indented space with the meat (preferably hot). Drizzle olive oil over the meat and garnish with fresh chopped parsley and a sprinkle of paprika.

Tip for making a creamier hummus: when you blend the ingredients, add three ice cubes and blend them in.