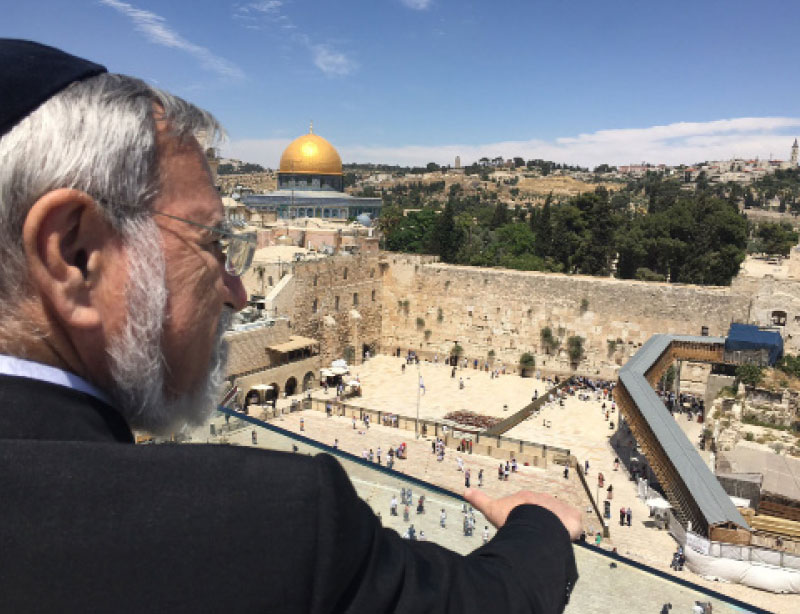 There are moments that make Jerusalem feel like no other place on earth; when you feel yourself lifted beyond time and space and embraced, as it were, by zro’ot olam, the arms of eternity.

There is no other place in the world where this happens. I want to share with you three such moments that changed my life.

The first took place in 1969. I had come to study in Israel following the completion of my first degree, and was standing on the newly rebuilt Hebrew University campus on Mount Scopus as the sun began to set, bathing the whole landscape in a divine radiance.

As I found myself looking down on the Temple Mount, I recalled the famous story at the end of Masechet Makkot, where Rabbi Akiva and his colleagues are looking down at the ruins of the Temple and see a fox walking through the place that was once the Holy of Holies. As the rabbis wept, Rabbi Akiva smiled and laughed, and when asked how he could, Rabbi Akiva retold the two interlinked prophecies of Uriyah – who foresaw the day when Jerusalem would be ruined – and Zechariah – who saw the day it would be rebuilt.

I remember standing at almost that exact spot and being overwhelmed with emotion. For almost 2,000 years, Jews had waited for that moment, and ours was the generation that lived to see Jerusalem reunited and rebuilt. We saw the realization of Zechariah’s prophecy 24 centuries ago. We had lived to see in person what our greatest Prophets could only see in a vision.

And I was struck by a question. If only Rabbi Akiva had known how long it would take, would he still have believed? Rabbi Akiva, a supporter of Bar Kochba, thought the rebellion would succeed and believed that the Temple would be rebuilt in his lifetime. If Rabbi Akiva had seen the devastation, persecution and hatred that occurred as a result of the rebellion and after, would he have still believed? The answer is of course he would, because that is what Jews did all through the generations.

No people ever loved a city more. We saw Jerusalem destroyed twice, besieged 23 times, captured and recaptured 44 times, and yet in all those years, wherever Jews lived they never ceased to pray about Jerusalem, face Jerusalem, speak the language of Jerusalem, remember it at every wedding, in every home they built, and at the high points of the Jewish year.

I ask myself how could Jews believe so much in a city they had been exiled from for so long? The answer, of course, is very powerful and is contained in two words in the story of Jacob. Recall, the brothers return home and show Jacob the blood-stained coat of Joseph. Realizing Joseph has gone, Jacob weeps, and when the brothers move to comfort him we are told, vayema’ein lehitnachem, Jacob “refused to be comforted.” Why? There are, after all, laws in Judaism about the limits of grief; there is no such thing as a bereavement for which grief is endless. The answer is that Jacob had not yet given up hope that Joseph was still alive. To refuse to be comforted is to refuse to give up hope.

That is what Jews did with Jerusalem. They remembered the promise that Am Yisrael had made by the waters of Babylon, im eshkachech Yerushalayim tishkach yemini, “if I forget Jerusalem, may my right hand lose its skill”. We never forgot Jerusalem. We were never comforted. We never gave up hope that one day we would return and because of that Jews never felt separated from Jerusalem.

And when it happened, in 1967, my Jewish identity was transformed when the world heard Har HaBayit beyadeinu, “the Temple Mount is in our hands”. Those three words changed a generation. That was my first moment: That no love was ever as strong as between the Jews and Jerusalem.

The second happened on Jerusalem Day a few years ago. Standing on the streets of the city, I watched youngsters from around the world, waving Israeli flags, singing and dancing with a joy that was overwhelming. As I watched the celebrations, I was overcome with emotion because suddenly I had a vision of the 1.5 million children who were killed in the Shoah not because of anything they had done, not because of anything their parents had done, but because their grandparents happened to be Jews.

I remembered how 26 centuries ago, the prophet Ezekiel had a vision of the Jewish people reduced to a valley of dry bones. G-d asked shall these bones live, and Ezekiel saw them come together, take on flesh, and begin to breathe and live again. G-d promised Ezekiel he would open his peoples’ graves and bring them back to the land.

I remembered the first reference to Israel outside the Bible on the Merneptah Stele, a block of granite engraved by Merneptah IV, successor to Ramses II, thought by many to have been the Egyptian Pharaoh at the time of the Exodus. It was an obituary, ‘Israel is laid waste, her seed is no more.’

I thought how some of the greatest empires the world has ever known – Egypt of the Pharaohs, Assyria, Babylon, the Alexandrian Empire, the Roman Empire, the medieval empires of Christianity and Islam all the way to the Third Reich and the Soviet Union – were the superpowers of their day that bestrode the narrow world like a colossus, seemingly invulnerable in their time. And yet each tried to write the obituary of the Jewish people, and whilst they have been consigned to history, our people can still stand and sing Am Yisrael Chai. That was my second epiphany: The knowledge that what I was seeing on that day in Jerusalem was techiyat hamaytim, a collective people being brought back from death to life. 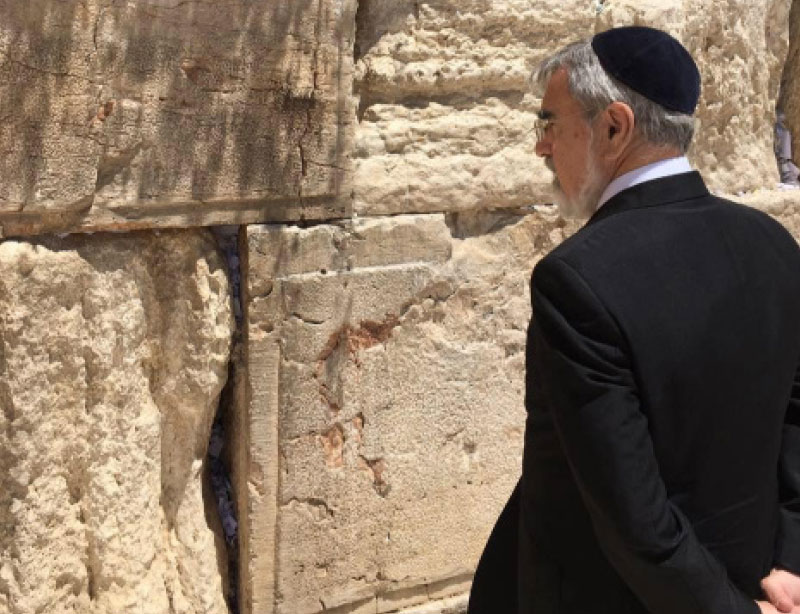 The third moment happened in early 1991. Having come to Israel prior to becoming Chief Rabbi, Elaine and I found ourselves in the middle of the First Gulf War. Towards the end of the war, one late Shabbat afternoon we were staying in Yemin Moshe when we heard beautiful music coming from one of the houses a few doors away. We went to see what was happening and found a group of Romanian Jews – a choir – who had just made Aliyah that week. Soon it seemed as though all the residents of Yemin Moshe had been drawn to the sound, people who had come to Jerusalem from all four corners of the world: America, Canada, Australia, South Africa, Eastern Europe and Arab lands.

Twenty-six centuries ago, the Prophet Jeremiah said that a time would come when we would not thank G-d for bringing us out of the land of Egypt, but rather for bringing our people together from all the lands of the earth. This second exodus Jeremiah described would be even more miraculous than the first. We lived to see this day, when Jews from 103 countries speaking 82 languages came to Israel to build not just their lives but the Jewish homeland. After generations it was Jerusalem that brought Jews together from all over the world as one people, in one voice, singing one song.

Whenever Jews remembered Jerusalem, something good came of it. Whenever they forgot Jerusalem, bad things happened.

So long as Jews remembered Jerusalem, we knew we were still on a journey, one in which the Jewish people has been on ever since the first syllables of recorded time: Lech lecha me’artzecha u’mimoladetecha u’mibeit avicha, (“Leave your land, your birthplace and your father’s house”). That is what every one of those people in Yemin Moshe that afternoon had done.

That was my third moment: Never has a city had such power over a people’s imagination.

When we visit Jerusalem today and see a place of such beauty it takes your breath away. Jerusalem is the place where all the prayers of all the Jews across all the centuries and from all the continents meet and take flight on their way to heaven. It is the place where you feel brushed by the wings of the Shechinah.

We have had the privilege to be born in a generation that has seen Jerusalem reunited and rebuilt. We have seen the Jewish people come home.

Today G-d is calling on us all to be Guardians of Zion. Never has this been more important. We must all stand up for the one home our people have ever known and the one city our people have loved more than any other. We are all shagrirey Medinat Yisrael (ambassadors for the State of Israel) and we must all make Israel’s case in a world that sometimes fails to see the beauty we know is here. Let us all take on that task. With Hashem’s help, we will succeed and we pray that the world will make its peace with Israel so that Israel and Israel’s G-d can bring peace to the world.