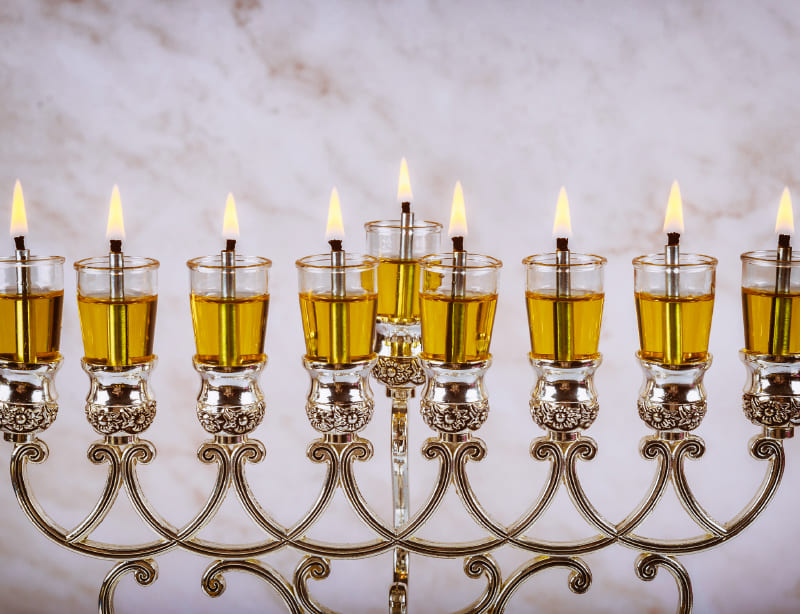 Why Didn’t the Greeks Destroy the Temple

Oil, oil and more oil. We light the chanukiah with oil as a reminder of the menorah in the Temple. And our Chanukah menu also revolves around that same miracle – doughnuts, latkes and various other fried (and usually fattening) delights. But does the miracle of the oil justify all this attention?

The Pnei Yehoshua1 argues that there was no need for the miracle of the oil at all. This is because there was a rule in the Temple that “impurity is permitted in public” – if the majority of the people are ritually impure, it is permissible to bring regular sacrifices even in a state of impurity. As the majority of the people were impure as a result of the war, and since the mitzvah of lighting the candles had a fixed time, the Kohanim were allowed to light the menorah with impure oil! Moreover, it appears that by following the same rule, impure oil was, in fact, used in the Temple for the Minchah offerings because there was only one cruse of pure oil available and it was used for lighting the menorah.

Let us take a step back. What was the war with the Greeks all about? On Purim, our enemies sought to physically destroy our people – “to destroy, kill and annihilate.” On Chanukah, however, the Greeks declared war on our spiritual identity – “to make them forget Your Torah.”

The Greeks considered themselves to be the most enlightened people in the world. But if they were so open to wisdom and learning from all cultures, why did they intensely oppose the Torah?

Our Sages have a saying: “Wisdom among the non-Jews – believe. Torah among the non-Jews – do not believe.”4 In other words, wisdom lies in a natural framework, while the Torah is the Word of G-d, beyond nature, and so it is eternal, does not change with the times, and is always relevant.

Non-Jewish society possesses much wisdom. The Greeks were pioneers in many areas of wisdom and progress. But the Torah, which is beyond nature, was something they couldn’t understand at all! And so they fought against Judaism specifically, not the Jews.

The Greeks were prepared to accept the Torah as an intellectually stimulating pursuit, as just another form of natural wisdom. For this reason, they did not destroy the Temple but planned to transform it into a museum.

This is the meaning of the Greeks’ defilement of the Heichal.5 Purity and impurity are entirely spiritual concepts; they have no significance or relevance in the world of nature. This was the battle the Greeks waged against our people. They defiled the Temple as if to say: The Torah is just like all the other wisdoms and sciences and there is nothing here beyond nature.

This is why the miracle of the oil was so critical. G-d performed a supernatural miracle for us to emphasize that the Torah is the Word of G-d, unlike and above all natural wisdom.

When we celebrate the miracle of the oil, we must remember that natural wisdom comes and goes. This world is transient, and opinions and trends change.

But our Torah is not just another body of natural wisdom. Our Torah is the true and eternal light – always shining, always relevant, always illuminating our paths in every generation.

5 Sanctuary, another expression for the Temple.