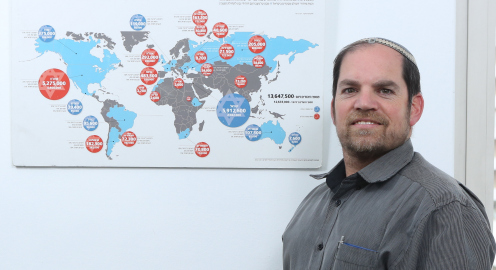 Three weeks ago in parashat Korach, we read of the rebellion against Moshe’s leadership. HaShem quickly settles the argument by creating a “mouth” to the earth, into which Korach and his family vanish, and the other 250 rebels are consumed by fire. Further opposition ends with the miraculous overnight blossoming of Aharon’s staff, proving beyond doubt that HaShem has orchestrated the death of Korach and that He chose Aharon and Moshe as leaders. In addition, HaShem appoints the Levites to serve as mediators between the Cohanim and the People.

The Torah specifically tells us [16:32] that Korach – who was a cousin of Moshe – and his entire family were swallowed by that earthquake:

We are therefore quite surprised to read this week in parashat Pinchas [26:11], that, miraculously, there were some survivors: וּבְנֵי-קֹרַח לֹא-מֵתוּ

There is a fascinating Midrash (Aggadat Bamidbar 26, quoted by Rashi):

“Korach’s sons were part of his faction at first, but during the dispute they had thoughts of Teshuva. Therefore they were given a high place in Gehenom and sang praise (of Hashem)”

The Ktav Sofer explains that the act of rebellion against Moshe – and indeed indirectly against HaShem himself – immediately had a strong negative effect on the People, causing many of them to move away from Torah. This made Korach and his sons instigators who caused the masses to sin, aka מחטיאי הרבים, who don’t have a share in the afterlife, and deserve eternal hell. However, since they did contemplate teshuva, thereby earning a chelek in Olam Haba, they were kept in a state of limbo, hanging onto a “high place in hell” until all those affected by their rebellion do teshuva as well.

Midrash Tanchuma adds that when Korach’s family was falling into the abyss, his sons yelled “Moshe is the King and the prophet; Aharon is the Cohen Gadol; the Torah was given from the heavens”! The Talmud (Bava Batra 74a) tells us they are still there, crying out their mantra every 30 days.

Korach’s sons, apparently, did not die with their father. A few things attest to that: Korach had three sons – Aviasaf, Asir and Elkana. We know that Shmuel HaNavi was a direct descendant of Korach’s son, Asir [Divrei HaYamim A, 6:18]. A quick look at Tehillim will reveal the fact that there are 11 psalms attributed to Korach’s sons (42, 44-49, 84, 85, 87, 88).

Some commentators are of the opinion that the three of them eventually left hell and resumed a normal life here on earth; others hold that these songs, composed in hell, became known to us through prophecy. When reading these psalms, you will notice that, in quite a chilling way, they include many allusions to that tragic earthquake in the wilderness.

On a different note, we can learn some mussar here by understanding the tremendous power of even the slightest thought of doing teshuva. Our Sages call this a “hirhur teshuva”. Look at the magnitude of loving-kindness HaShem shows us: Even if one were able to achieve complete teshuva, forgiving our sins would still be the greatest chessed HaShem can do with us. For if I have sinned in the past, it is now a done deal, and it should be impossible for me to travel in time, to go back and erase that sinful act from reality. But that is exactly what teshuva does – and that is why we are taught that “teshuva was there before the world was created” [Pesachim 54], as if to say: teshuva goes above any limitation of time and space.

And here’s the clincher: HaShem doesn’t even require a thorough, full and sincere teshuva (what we call in tefillah a teshuva shleima) from man; even a mere thought such as “why am I doing this? I’m only hurting myself by distancing myself from G-d, from the source of my life. I better get my act together and change my ways” – is reason enough to forgive our sins, and it constitutes the first level of the endless ladder of teshuva, as noted by Rav Kook in his introduction to his famous Orot HaTeshuva.

In a different place the Talmud (Eruvin 19) tells us that there are three openings to hell: one in the wilderness, one at sea and one in Jerusalem. Maybe this means that there are different ways to cause oneself to do teshuva – like the sons of Korach did when facing the “entrance” to hell in the wilderness; or when facing death at sea, like Yona the prophet did, or – better yet – instead of waiting to be “awakened by an earthquake” to do teshuva, we can connect to Hashem the way we should: within the Holy City of Yerushalayim…