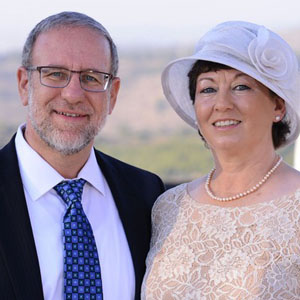 Rabbi Ari Kahn is a rabbi, author, and educator, he received his rabbinic ordination from Yeshiva University’s Rabbi Isaac Elchanan Theological Seminary, where he studied with Rabbi Yosef Dov Soloveitchik and Rabbi Aharon Lichtenstein. He graduated Yeshiva University with a BA in Psychology and an MS in Talmud.
Rabbi Kahn is Director of Foreign Student Programs at Bar-Ilan University in Israel, where he is a Senior Lecturer in Jewish Studies. He also serves as Rabbi of the Mishkan Etrog community in Givat Ze’ev. He has authored ten books on Jewish thought, including the highly acclaimed “Echoes of Eden” series, and has published hundreds of articles on Torah and Jewish thought. Rabbi Kahn is a member of the Va’ad Rabbanei Zaka.

Naomi Linder Kahn received degrees in Political Science and Near Eastern Languages and Literatures from New York University. She served as Director of the Schools Of Judaic Studies and of Education at Lander Institute of Jerusalem, and is a well-known editor and translator.
Mrs. Kahn is the Director of the International Division at Regavim, a research-based think tank and lobbying group dedicated to the protection and preservation of Israel’s sovereignty.

Naomi and Ari Kahn, have lived in Givat Ze’ev, Israel since 1984