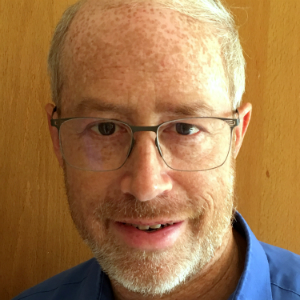 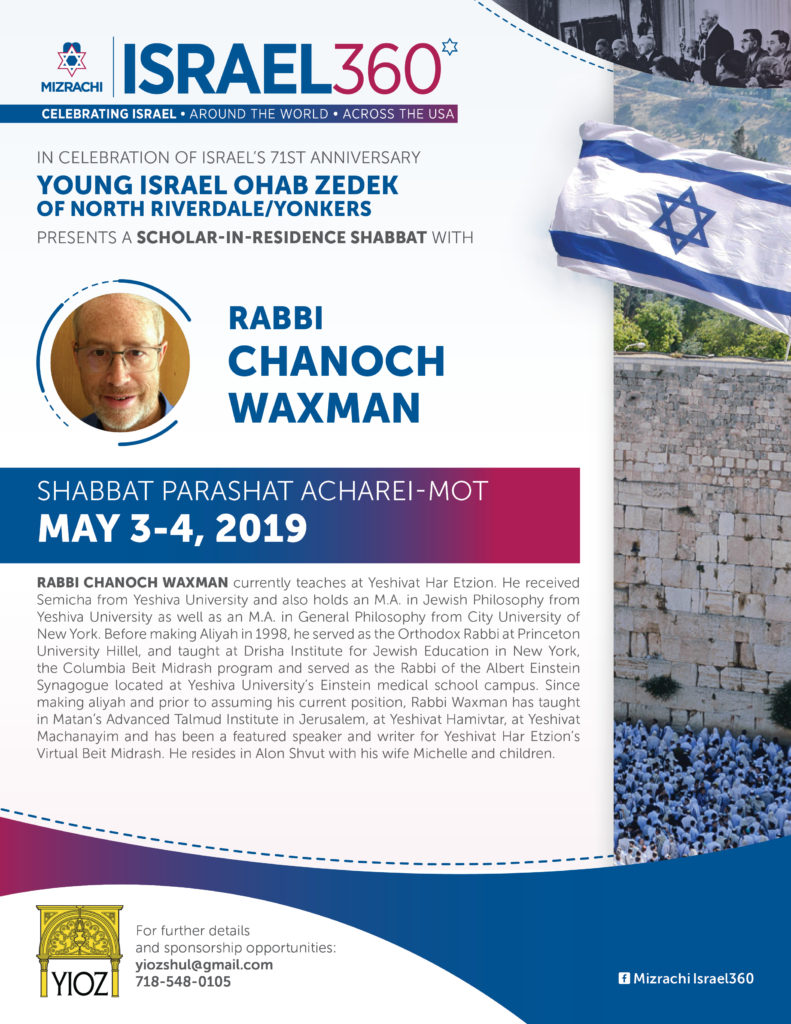 Rabbi Chanoch Waxman currently teaches at Yeshivat Har Etzion. He received Semicha from Yeshiva University and also holds an M.A. in Jewish Philosophy from Yeshiva University as well as an M.A. in General Philosophy from City University of New York. Before making Aliyah in 1998, he served as the Orthodox Rabbi at Princeton University Hillel, and taught at Drisha Institute for Jewish Education in New York, the Columbia Beit Midrash program and served as the Rabbi of the Albert Einstein Synagogue located at Yeshiva University’s Einstein medical school campus. Since making aliyah and prior to assuming his current position, Rabbi Waxman has taught in Matan’s Advanced Talmud Institute in Jerusalem, at Yeshivat Hamivtar, at Yeshivat Machanayim and has been a featured speaker and writer for Yeshivat Har Etzion’s Virtual Beit Midrash. He resides in Alon Shvut with his wife Michelle and children.

Sample Topics - General:
I usually teach either Chumash, Nakh or AggadahMachshava during when visiting communities abroad. However Medical Ethics and Modern Halakhic Issues in the State of Israel are topics I have dealt with.

In addition to talks on any Parsha of the Torah, here is a very short list of some topics in Aggadah, Machshava and Tanakh (including explanations of the title)

Dancing Before the Kallah: Of Brides, Rabbis and Bayit
(The shiur analyzes the seemingly Halakhic yet also Aggadic sugya of Keitzad Merakdin Lifnei Hakallah" found in Ketubot 17a. It covers the famous argument between Beit Shammai and Beit Hillel regarding the balance between truth and other values, It also provides insight into Chazal's attitude toward physical beauty and proper Rabbinic behavior. In addition, the shiur highlights how through an intriguing set of references to Sefer Shmuel, the aggadah develops a particular tension between Talmud Torah and FamilyIshut that runs through many aggadot found in Masechet Kiddushin and Masechet Ketubot)

Rav Yose and the Ruins of Jerusalem: Prayer, Past and Future in Brachot 3a
(Reading of one the first aggadot in the Bavli found at Brachot 3a, The shiur highlights some central methodological issues in reading aggadah and central themes in Machashavat Chazal regarding the power of prayer, the problem of prayer in a post destruction era and tensions between a past oriented posture and future oriented posture)

Make Your Ears Like Funnel: Conflict and Truth in Hagiga 3b
(The shiur discusses the problems of conflict, truth, halakhic pluralism and post-modern confusion through the lens of a well known aggadah found at Hagiga 3b. The shiur covers the varied opinions of numerous Midrashim, Talmud Yerushalmi, Rashi and Maharal to these topics)

The Seven Headed Crocodile and the Beit Midrash of Abayye
(Reading of a well known aggadah found at Kiddushin 29b, the story Rav Acha bar Ya'acov's defeat of a seven headed "mazik" found in the Beit Midrash of Abayye. The shiur highlights the methodological issue of the relationship between Talmudic aggadot and the surrounding Halakhic sugyot. The shiur also explores crucial notions in Machshevet Chazal such as "reliance upon miracles" and the role of humility as a necessary condition for Torah study)

King Yannai and the Golden Tzitz: Reading Kiddushin 66a
(The shiur explores one of the famous stories regarding Yannai and the Hachamim found in the Bavli. It covers some of the approaches found in Machshevet Chazal regarding the relationship between political and spiritual authority. In addition it demonstrates some of the connections between Talmudic Aggadot on the one hand and Tanakh on the other, including a suprising connection to the Purim story.

Making Man in Our Image: Cloning as a Jewish Philosophical Dilemma
(The shiur explores the question of human cloning from a Jewish philosophical perspective. It considers the implications of Ramban, Maharal and Rav Soloveitchik's thought for the topic)

The Gates of Nikinor: On Sea Voyages and Miracles in Yoma 38a
(The shiur discusses a aggadah found at Yoma 38a. It explores the meaning of returning to God both physically and spiritually as well as highlighting some important issues in Sefer Yonah. The shiur demonstrates how aggadot are often modeled upon stories found in Tanakh)

On One Foot: Hillel, Shamai and the Convert
(Shiur on the famed aggada of Shabbat 31a. The shiur attempts to read the aggada with an eye to questions such as: Was Shamai indeed correct? Does the Torah indeed rest upon a single principle? What did the “humility” of Hillel consist of? And, have we all become Shamaists about conversion? Utilizing commentaries ranging from Maharsha to Rav Kook as well as literary analysis the shiur attempts to tackle some of these thorny and ever relevant questions.)

The Expulsion of Yishmael and the Possibility of a God's Eye View
(Shiur on Chapter 21 of Sefer Bereishit. The shiur attempts to both explain the motivations of the characters as well as provide a systematic comparison of the expulsion of Yishmael and the story found in Chapter 22, Akeidat Yitzchak. In doing so the shiur attempts to explain the "choice" of Yitzchak over Yishmael by divine providence)

Revealing the Tetragrammaton: The Problem of a New Divine Name
(Shiur on beginning of Parshat Vaeira exploring the revelation of God's proper name to Moshe in Sefer Shemot. The shiur attempts to demonstrate how current literary methodology can contribute to the resolution of this problem. In addition, the shiur attempts to provide insight into the meaning of "knowing God" and to generate a coherent reading of the first six chapters of Shemot)

The Hands of Moshe: Towards a Phenomenology of Faith
(This shiur provides a reading of the story of the battle with Amalek found in Chapter 17 of Sefer Shemot. It attempts to develop a novel understanding of the story in light of a parallel between the story and another battle story, that of Keriyat Yam Suf, found earlier in the parsha. In doing so, the shiur also attempts to provide insight into the meaning of "emuna" in Sefer Shemot)

Shmuel and the House of Eli: Of Fathers Sons and Sacrifice
(The shiur considers the story of the sons of Eli found in Chapter Two of Sefer Shmuel. The shiur compares the chapter to both the parsha of "the rebellious son" and the story of Akeidat Yitzchak. In doing so, the shiur attempts provide a novel interpretation of the beginning of Sefer Shmuel but also to develop ideas regarding divine service and dedication to God)

Bringing Up the Ark of God: On Failure and Success in Sefer Shmuel
(The shiur deals with the story of David’s two attempts to bring the Ark of God to Yerushalayim found in Chapter Six of Shmuel Bet. By means of comparison to the version of the story found in Divrei Hayamim, earlier narratives found in Sefer Shmuel and a fascinating structural aspect of the narrative of chapter six, the shiur attempts to outline different explanations for the failure of the first attempt and success of the latter. In addition, the shiur presents particular theories regarding the proper mode of relation to the Divine presence and the differing agendas of the books of Shmuel and Divrei Hayamim)