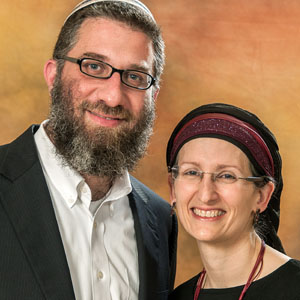 Rabbi Eitan Mayer serves as Menahel Chinuchi at Midreshet Moriah. “Rav Eitan,” as his students call him, is known for his shiurim in Chumash and Machshavah, which emphasize creative thinking and personal grappling with Torah and its implications for our lives. Rav Eitan learned at Yeshivat Sha’alvim, received Semikhah at RIETS as a Wexner Graduate Fellow, and continued his learning in the Beren Kollel Elyon. He earned a BA in English Literature and an MA in Jewish Education at Yeshiva University, and is completing an MA in Jewish Philosophy and an EdD in Jewish Education at Yeshiva University. Rav Eitan taught Gemara and Halakhah at the Graduate Program for Women at Yeshiva University and served as Assistant Rabbi at The Jewish Center on Manhattan’s Upper West Side.

Rabbanit Sally Mayer serves as Rosh Midrasha at Ohr Torah Stone’s Midreshet Lindenbaum, as well as teaching Talmud and Halacha at the midrasha. She has worked as an editor for the new Koren translation of the Talmud. Before moving to Israel with her family, Rabbanit Mayer was a member of the core faculty that built Ma’ayanot Yeshiva High School for Girls in Teaneck, NJ, where she chaired the Talmud Department and directed Israel Guidance. She has served as Education Director at The Jewish Center on Manhattan’s Upper West Side and lectures in communities in the United States and Israel. A Midreshet Lindenbaum alumna, she holds a BA from Stern College, and an MA in Medieval Jewish History from Yeshiva University.

The Mayers live in Neve Daniel.