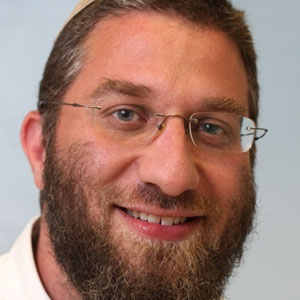 Rabbi Eitan Mayer is our Menahel Chinuchi and Assistant Dean. “Rav Eitan,” as his students call him, is known both for his wry sense of humor and his shiurim in Chumash and Machshavah, which emphasize creative thinking and personal grappling with Torah and its implications for our lives. Rav Eitan learned at Yeshivat Sha’alvim, received Semikhah at RIETS as a Wexner Graduate Fellow, and continued his learning in the Beren Kollel Elyon. He earned a BA in English Literature and an MA in Jewish Education at Yeshiva University, and is completing an MA in Jewish Philosophy and an EdD in Jewish Education at Yeshiva University. Rav Eitan taught Gemara and Halachah at the Graduate Program for Women at Yeshiva University and served as Assistant Rabbi at The Jewish Center on Manhattan’s Upper West Side. Rav Eitan lives in Neve Daniel with his family.

Sample Topics - General:
-- Do We Really Want Moshiach?
-- How Involved is God in My Life?
-- What Happens When a Halachah is Based on Wrong Science?
-- Yosef, Misinterpreter of His Own Dreams
-- Why Did Hashem Choose Avraham?
-- Why Was the Tree of Knowledge Their One Test?
-- The Inspirational Message of the Yom Kippur Avodah
-- Great Divrei Torah for the Pesach Seder
-- Why Are There Two Creation Stories in the Torah?
-- Dinosaur Fossils in a World Just 6,000 Years Old
-- Why Did Hashem Send Angels to Tell Avraham News He Already Knew?
-- Why Didn't Hashem Just Tell Avraham There Were No Tzadikim in Sodom?
-- The Grave Mistake: Avraham's Purchase of a Burial-Place for Sarah
-- Since When Do Angels Need a Ladder Anyway?
-- What is The Story of Yehudah and Tamar Doing in the Torah?
-- Did Yosef Really Forgive His Brothers?
-- There Was No Blood in the Plague of Blood
-- How Does Prophecy "Work"?
-- The Profound, Personally Relevant Message of the Korban Pesach
-- Eshet Chayyil: Who is it Really About?
-- and much more...