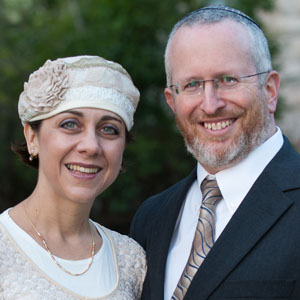 Dr. Yael Ziegler is a lecturer in Tanakh at Herzog College and Matan. She received her BA from Stern College and an MA and Ph.D. at Bar Ilan University. Dr. Ziegler has lectured widely on various Tanakh topics in Israel, the United States, South Africa, Australia and Europe. She lives in Alon Shvut, Israel, with her husband and their five children. Dr. Ziegler is the author of Promises to Keep: The Oath in Biblical Narrative, and Ruth: From Alienation to Monarchy, which has also been translated into Hebrew: רות: מניכור למלוכה. Her forthcoming book on Megillat Eikha is scheduled for publication in 2020.

Rabbi Reuven Ziegler is Chairman of the Editorial Board at Koren Publishers Jerusalem, Director of Research at the Toras HoRav Foundation, and Founder and Editor-in-Chief of Yeshivat Har Etzion’s renowned Israel Koschitzky Virtual Beit Midrash. He is the author of Majesty and Humility: The Thought of Rabbi Joseph B. Soloveitchik (2012) עוז וענווה, and numerous articles, and co-editor of Rav Soloveitchik’s MeOtzar HoRav series. He is also the editor of many books, including an adaptation of Rav Aharon Lichtenstein’s oral discourses entitled By His Light: Character and Values in the Service of God (2003) and a work on the teachings of Rav Yehuda Amital entitled LeOvdekha BeEmet (2011). He has lectured widely to yeshiva and college students and has served as scholar-in-residence at synagogues on three continents.