A family in the picturesque Ein Kerem neighborhood of Jerusalem were digging below their house while doing some renovations and discovered a Mikva which is over 2000 years old. The Israel Antiquities Authority were amazed to discover that under the stylish rug in the family’s living room, is a pair of wooden doors that conceal an ancient Mikva.

The Mikva is complete, large (3.5 m long, 2.4 m wide, 1.8 m deep) hewn and plastered meticulously all according to the laws in Halacha. A staircase leads to the bottom of the Mikva and they discovered at the bottom potsherds from the Second Temple period (1st century AD) and traces of fire, (which may constitute evidence that they are from the destruction of 66-70 CE. Also found were fragments of stone vessels that were common during the Second Temple, as stone does not accept tumah (impurity) and remains tahor (pure). 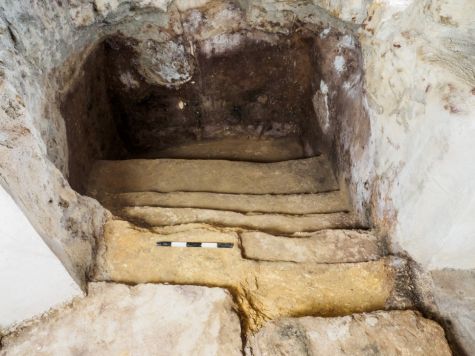 Photos from the Israel Antiquities Authority