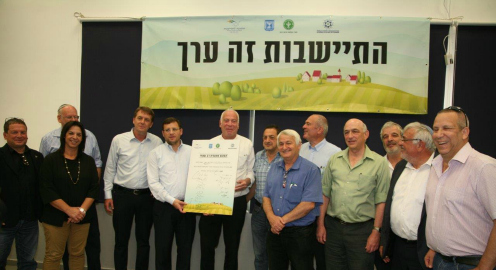 The Settlement Division of the World Zionist Organization is responsible for the funding of projects in Israel’s periphery totaling hundreds of millions of shekel.

For the past couple of years, due to a legal battle, the Settlement Division’s funding from Israel’s government has been frozen and all activity halted.

This week, the funding was finally agreed upon.

One of Mizrachi’s representatives in the National Institutions is Gael Grunewald who was appointed the Head of the Settlement Division at the last World Zionist Congress. Grunewald signed the agreement with the government together with Agriculture Minister Uri Ariel with mayors of affected Regional Councils also in attendance.