Bracha and Peninah, founders of Here Next Year.

Founded by sisters Peninah and Bracha Lamm (now Kaplansky and Berger) in 2015, Here Next Year empowers hundreds of yeshivah and seminary students to fulfill their dreams of staying in Israel for IDF service, Sherut Leumi and university studies. Now a division of Nefesh B’Nefesh, Here Next Year provides a warm and encouraging community for Anglo students who stay in Israel, offering practical guidance and emotional support to young olim.

Rabbi Elie Mischel spoke with Bracha and Peninah, as well as past and current directors Yael Engelhart and Jodi Joffe, to learn more.

Bracha and Peninah – the growth of Here Next Year over the last seven years is remarkable. What drove you to establish Here Next Year in 2015 when you were in your early twenties?

Here Next Year began when a group of us came together to solve a problem we had all just recently, and separately, faced. We had all served in Sherut Leumi and the IDF the previous year, and had then made our way to Givat Shmuel to study at Bar-Ilan or IDC. For all of us, the process of joining Sherut Leumi and the IDF had been confusing and overwhelming, and our service, while incredibly meaningful, had been rather lonely. Most of us only knew a handful of friends who had chosen to stay in Israel. Imagine our shock when we arrived in Givat Shmuel to find dozens of people our age who had also experienced the same loneliness and confusion the year before! It seemed so chaval (such a shame), as they say, that we hadn’t all known each other before.

We decided to host a small shabbaton in Givat Shmuel for our younger seminary and yeshivah friends who were considering staying in Israel so they could build a support system of friends their age and people who had recently finished the army and Sherut Leumi. We had hoped for about 35 students, but soon discovered 150 students had registered! Luckily, Nefesh B’Nefesh helped save the day by providing additional funding for our shabbaton.

Here Next Year grew naturally from the success of that first shabbaton. We began pairing up our friends with seminary and yeshivah students, speaking at yeshivot and midrashot, creating informational events and resources, building a website and hosting lots of social events. It was a total blast, and so exciting to see these students build strong and lasting connections with one another – connections that not only enhanced and improved their own service to the State of Israel, but encouraged others to stay as well. It was everything we wished we would have had.

One of our favorite moments (aside from several couples meeting through Here Next Year!) was when we spoke at a seminary in Jerusalem and a few of the students remarked that they came to hear our presentation because staying to serve in Israel was “the cool thing to do these days.” To us, that one comment was all we needed to feel like our hard work was worthwhile!

Why do you think so many young people are making the decision to stay in Israel after their gap year?

The popularity of staying in Israel reflects a massive, and underrated, success of the Jewish education system in the Diaspora. We see hundreds of students each year who eagerly choose to become part of something larger than themselves. Whether their Zionism comes from their homes, schools, youth movements, summer camps or dozens of other Zionist institutions, it’s hard to deny their unbelievable success!

It’s an incredibly idealistic stage of life and a time when young people are finally old enough to start making big life decisions. After a very “me” focused year of yeshivah and midrasha, many young people feel the need to give back. It’s also practically easier; young people aren’t tied down by obligations to a spouse or children and they have boundless energy to face the challenges of a new culture and language. Many 18-year-olds don’t even know how bureaucracy like health insurance and banking works in their native country, so they’re less overwhelmed when learning it here. And let’s be honest – when making the decision to uproot your life, it helps to be a little naive!

Yael, you helped Here Next Year shift from being an independent grassroots organization to becoming a subsidiary of Nefesh B’Nefesh. What was the backstory to the change?

The transition allowed Here Next Year to access additional resources without “young olim for young olim” culture. Joining Nefesh B’Nefesh relieved us of the bureaucratic and financial headaches, which has allowed the organization to focus on what it does best – its programming and participants. It’s been a great step forward. 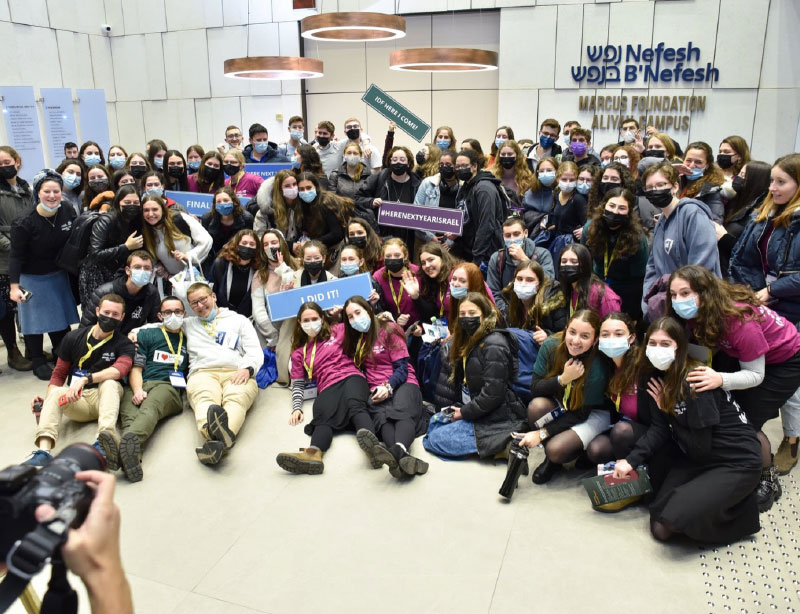 Jodi, you work with hundreds of young people making Aliyah. What are some of the key challenges that young olim grapple with after deciding to stay in Israel?

As with most people in their twenties, there are growing pains that come with living independently. Whether it’s scheduling your own doctor appointments, learning how to pay utility bills, or even just building a new friend group and support system, young olim face the same challenges their peers back home are facing – all while moving to Israel without their nuclear family!