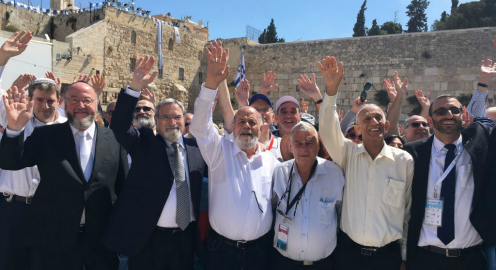 Our events surrounding our YY50 mega-mission hit the headlines in publications both in Israel as well as abroad.

You can see a selection of the articles and some quotes below:

“To me, everything about Jerusalem is heavenward,” said Rabbi Doron Perez, head of the World Mizrachi Movement, which gathered about 3,000 Jews from around the world, including the United States, Canada and Mexico. “Jerusalem is an earthly city and a heavenly city. There is something spiritual about this moment. For us to return to this place 50 years later, it’s as if we were living a dream.”

“Has this seminal moment of Jewish history brought complexity?” asked Doron Perez, head of the World Mizrachi Movement, an umbrella group for religious Zionists. “It absolutely has. But you have to get back to first principles, which was the return of the Jewish people to its holiest city.”

More than 3,000 people from around the world are set to participate in a four-day “mega mission” beginning Monday to celebrate 50 years since the reunification of Jerusalem under Israeli control…

“The aim is to try to bring as many people from Mizrachi communities to celebrate this milestone together,” World Mizrachi Movement CEO Rabbi Doron Perez told The Jerusalem Post…

[T]he Mizrachi conference is for all ages, spanning from the 50 high school students who are attending to a 97-year old participant.

Some 1,200 of the participants are from the Diaspora, and they include volunteers who came to Israel to help out on kibbutzim in 1967, filling in for the kibbutz residents fighting in reserve duty during the Six Day War. These include a group of 70 former Bnei Akiva students from South Africa.

The opening event will honor the volunteers as well as lone soldiers who continue to move to Israel from the Diaspora in order to serve in the IDF today.

Perez noted that the movement today is facing a challenge due to the many core members of Diaspora communities who have made aliya. “We are proud of this but it had depleted a lot of the Diaspora communities” he said, explaining that it can leave those who remain there feeling lost.

While the focus of the movement continues to be on Israel, Perez said, there also needs to be responsibility for the Diaspora communities and an ongoing effort to connect them to Israel and the global Zionist modern Orthodox movement, “which is dynamic, interconnected and working together.”

World Mizrachi sees Jerusalem Day as an opportunity to present a global revitalization of its organization.

According to Perez, this week will be the first time that so many members of the movement will come together to celebrate Jerusalem Day, which he described as “tapping into the power of Jerusalem” to unite people, with an emphasis on World Mizrachi’s twin values of religious spiritual identity and Jewish national identity…

“When our three boys were kidnapped, people told us that in the midst of all the sorrow, a miracle happened to us.” Racheli Fraenkel was speaking at the Binyanei Ha’uma Convention Center during the World Mizrachi Yom Yerushalayim Mega Event.

The audience consisted of thousands of Jews who had travelled from all over the world to touch history and participate in the 50th Anniversary celebrations of the Unification of Jerusalem. They each paid a considerable sum to take part in what we take for granted on a daily basis and what we sometimes overlook.

They all knew Racheli as the mother of Naftali, one of the three kidnapped teenagers murdered in the summer of 2014. The entire Jewish world followed the days of searching for the three missing boys. What miracle was Racheli referring to?

“During those days, we were united for the first time. People from all different backgrounds, including unaffiliated Jews, came, prayed and expressed their concern. They told us that they had asked older people in their communities whether they had ever before witnessed such unity. They were told that only once before was the entire Jewish people truly united. This occurred exactly fifty years ago, in the even more dramatic days of 1967. In 1967, as in 2014, the wonderful spirit of unity arose from war and tragedy. It is possible to achieve this magic. After you experience such a miracle, something awesome happens – you lose the ability to be a cynic.”

On… Israel Uncensored, Josh Hasten speaks to World Mizrachi CEO Rabbi Doron Perez about the organization’s four-day celebratory extravaganza marking the 50th anniversary of the liberation of Jerusalem. The events, starting Monday, include a mega conference about Jerusalem, a festive concert, prayers at Jerusalem’s Great Synagogue and more.

Jerusalem Mayor Nir Barkat spoke this morning (Tuesday) to hundreds of Jews from around the world who participated in the Jerusalem Day events organized by the World Mizrachi Movement.

Speaking at the conference at the Ramada Hotel in Jerusalem, the mayor reviewed the city’s achievements in tourism, technology, and culture and asked to convey a message to President Trump.

“I say clearly, they will never divide Jerusalem,” Barkat said. “To President Trump we are grateful and say again that we want to see the transfer of the embassy to Jerusalem.”

“We are not afraid of it, because we are fighting the bad guys in any case … do the right thing, do not give in to any threat – transfer the embassy to Jerusalem,” he said.

Mayor Barkat also referred to the security situation in the city and said, “The statistics speak of the fact that in the United States there are 9 murders for every 100,000 residents. In Jerusalem 1 per 100,000. So when I go to the United States, I pray to return safely to Jerusalem.”

Speaking at the World Mizrachi annual conference in Jerusalem, [MK Rabbi Yehuda] Glick says that while visiting the Western wall yesterday, Donald Trump mistakenly called the site “the holiest place in the world for the Jewish people.”

“That is incorrect!” Glick says.

“We have a tendency to forget that the Temple Mount is our central focus, not the Western Wall,” he says, finishing his speech with a call for all Jews to ascend to the Temple Mount to mark Jerusalem Day tomorrow.

Rabbi Doron Perez, CEO of the World Mizrachi Movement and organizer of the event, said, “This was the pinnacle of our four-day program; being able to stand at the Kotel with these three men at the exact time of day that they liberated the site 50 years ago was a life changing experience. Jews from ten countries worldwide traveled thousands of miles for this moment alone. We hope that the experience imbued them with a deeper appreciation for the Land, Torah, and People of Israel, which they will inject back into their communities.”

He added, “Make no mistake—the miracles of the Six Day War were the greatest thing to happen to the Jewish people since the time of Chanukah, if not the splitting of the Red Sea.”

The three Israeli paratroopers whose photograph has symbolized the Jewish return to the Western Wall were back there on Jerusalem Day at the exact hour when they liberated the site 50 years ago.

Dr. Yitzhak Yifat, Tzion Karasenti and Chaim Oshri joined thousands of Jews from around the world to mark Jerusalem Day.

“Returning to the Kotel with these people was almost as exciting as my first time,” Karasenti, the first paratrooper to reach the Western Wall in 1967, said in a statement. “To see the joy in their eyes, being with the three of us on this momentous occasion made the moment even more special.” 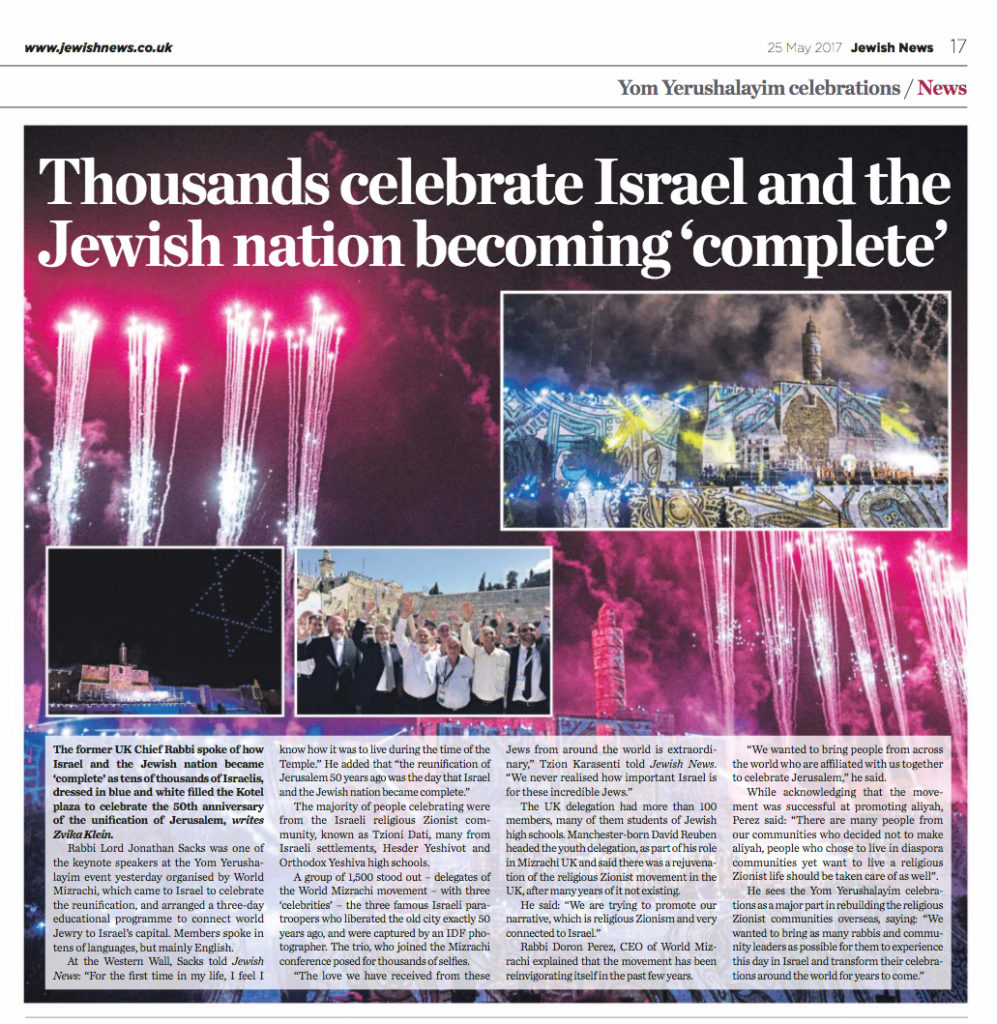 Coverage of our festive dinner in partnership with Ateret Cohanim

Cherna Moskowitz, wife of the late Jewish philanthropist Irving Moskowitz, was honored Wednesday evening at an event hosted by Ateret Cohanim and the World Mizrachi Movement in Jerusalem for her half of century of support for projects across the Israeli capital following its liberation in 1967.

Together with Irving, Cherna Moskowitz supported Israeli projects and Jewish causes around the world since 1968 through the Moskowitz Foundation, and promoted pro-Israel activities with the Moskowitz Prize for Zionism.

After more than a decade of awarding grants and prizes for those who helped to build Israel, Moskowitz was finally recognized herself for her own contributions and those of her late husband on behalf of Jerusalem and the State of Israel.

The event, which also honored Koren Publishers owner Matthew Miller, was held at the Armon Hanatziv Promenade, which overlooks the Old City of Jerusalem, and coincided with the 50th anniversary of the liberation of the Old City and unification of Jerusalem.

The following Monday evening we were treated to the opening of the World Mizrachi gathering at Binyanei Ha’uma. More than 3,000 assembled for the event, including a significant number of Teaneckers, to celebrate 50 years of Yerushalayim. Flashing beams of colorful lights, booming music and a particularly lively audience made for a feeling of true chag. Minister Naftali Bennett was joined by American Governor Mike Huckabee in greeting the crowd with uplifting words of optimism and praise for the City of Gold. Tributes were paid to the three veteran paratroopers who liberated the Kotel, famous for their iconic photograph, who in turn bestowed blessings upon three young men soon to enter the IDF. Lone soldiers were touted as were retired generals and personalities within the government. Deputy Mayor of Jerusalem Chagit Moshe, herself a Dati Leumi, expressed words of welcome and pride to the enthusiastic audience.

Then came the moment when Yaakov Shwekey, to an uproarious reception, took the stage and the evening. From his initial entry to his last selection, the crowd was on its feet in song and dance. From his English lyrics dedicated to special children to his proud tributes to Am Yisrael, we were all put into true celebratory mode for the momentous occasion.

Amongst the many organizational events that took place, the World Mizrachi organization, under the leadership of its new Director Rabbi Doron Perez, hosted a three-day Yom Yerushalayim conference. The conference commenced on Monday night, May 22, with a most beautiful multimedia event at the Binyanei Hauma Convention Center. In preparation for a year, thousands of people participated in the singing and dancing, video presentations and historic recollections of the capture of Jerusalem. The event included a concert by Shwekey and additional artists.