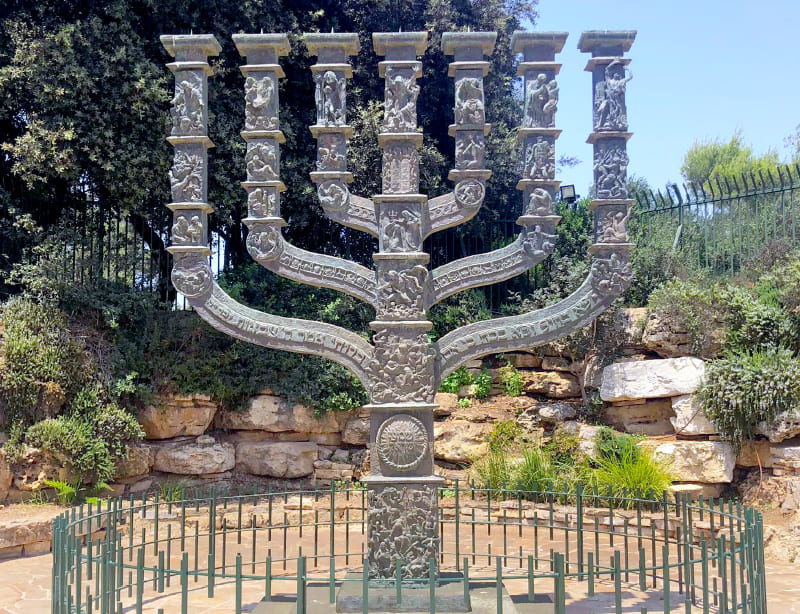 The Knesset Menorah, a gift from the UK Parliament in 1956 in honor of the eighth anniversary of Israeli independence. (Photo: Col. Richard Kemp)

The Menorah as the Symbol of the Jewish State

The official symbol of the State of Israel is a menorah flanked on each side by an olive branch. This familiar image was designed by Gabriel and Maxim Shamir, two brothers from Latvia who studied graphics and design in Berlin prior to making Aliyah, and were responsible for creating a number of emblems, medals, stamps, and currency for the young State. Their menorah was adopted as the official emblem by the Provisional Council of the State of Israel on February 10, 1949.

It’s easy to understand why the developing nation adopted the emblem. The menorah has been a central Jewish symbol since antiquity. In addition to its role in the Mishkan, the Beit HaMikdash, and the Chanukah story, images of the menorah have been found in synagogues, cemeteries, mosaics, and seals throughout Jewish history. The decision to surround it with olive branches is based on the prophet Zechariah’s vision of a menorah flanked by olive branches (Zechariah 4:3).

But the choice of the menorah was not without controversy.

Upon careful inspection, the menorah depicted on Israel’s national emblem is the same menorah that appears on the Arch of Titus in Rome. Built circa 81 CE by Emperor Domitian to commemorate the victories of his brother Titus, including his conquest of Jerusalem, the south panel of the Arch famously depicts Roman soldiers with celebratory wreaths on their heads parading vessels taken from the Holy Temple: The Shulchan, trumpets, fire pans, and at its center, the menorah.

The “Spoils of Jerusalem” relief inside the Arch of Titus in Rome. (Photo: Wikimedia Commons)

Chief Rabbi Yitzchak Halevi Herzog strongly objected to the choice for Israel’s emblem, as he believed that the menorah which appears on the Arch of Titus is not the menorah from the Beit HaMikdash. For Rabbi Herzog, the most problematic aspect of the Arch of Titus menorah is its hexagonal base. According to the Talmud (Menachot 28b) and Rashi (Shemot 25:31), the menorah had a three-legged base and not a hexagonal base. Images of a three-legged menorah appear in carvings on many ancient synagogues and graves and ancient mosaics throughout Israel.

Rabbi Herzog was also troubled by the depictions of dragons and other mythical beasts like griffins, lions, eagles, and sea creatures that are found on the base of the Arch of Titus menorah. According to Rabbi Herzog, it is inconceivable that such idolatrous creatures could be represented on a menorah that stood in the Holy Temple. The use of objects ornamented with dragons is strictly forbidden by Jewish law (Mishnah, Avodah Zarah 3:3).

Rabbi Herzog concludes and writes, “What emerges from this is that our government has not done well today when we have merited again the light of Zion symbolized by the menorah, copying specifically the image of the menorah on the Arch of Titus which was made by the hands of foreigners and not made in the purity of holiness according to the Torah of Moshe Rabeinu, a genius of geniuses, and from other sources derived by Chachmei Torah. And not just that, but an expert archeologist testified before me that the menorot depicted on the graves in the catacombs of Rome are all three-legged, as are all of the menorot depicted in mosaics of the remains of synagogues found in the Land of Israel.”

Rabbi Herzog was not the only one to question the identity and authenticity of the menorah that appears on the Arch of Titus. Both Rabbi Yosef Kapach and the Lubavitcher Rebbe believed that the branches of the Temple menorah were straight and not curved, based on an illustration of the Rambam in the manuscript of his Peirush HaMishnah on Tractate Menachot. Accordingly, they did not believe that the menorah on the Arch of Titus accurately depicts the menorah from the Beit HaMikdash.

It would appear as if the Shamir brothers anticipated the objection – at least the objectionable mythical beasts on the base of the Arch of Titus menorah – and obscured the images in the emblem of Israel. Instead, they appear as faint squiggly lines on the emblem’s base. 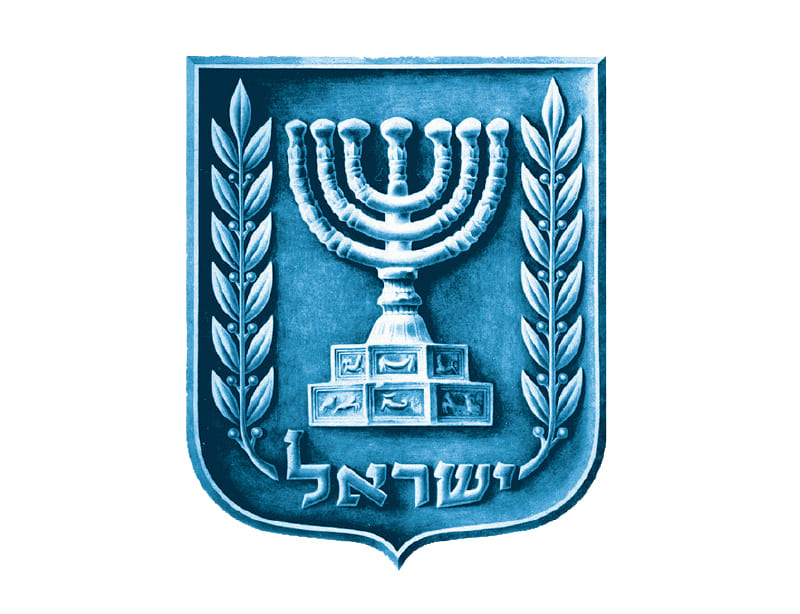 Rabbi Herzog advocated that the Provisional Council adopt one of the other submissions, but his opposition fell upon deaf ears. Even other Religious Zionist rabbis did not voice an objection. Very quickly, the controversial new emblem gained acceptance. In time for Israel’s first Independence Day, the Religious Zionist newspaper Hatzofeh chose the new emblem to grace the cover of one of its supplements. Ultimately, the symbol was formally adopted by the Jewish State.

For some, the choice of the menorah from the Arch of Titus in Rome for the newly created modern State of Israel was symbolic and meaningful. For centuries, the Arch of Titus represented the destruction of the Holy Temple and Jerusalem and our people’s long Exile. But following Israel’s independence, that very same image took on new life and new meaning. Now that they had built a state and returned home to Jerusalem, Israel’s founding generation viewed the image with a newfound sense of hope and even victory. And so the menorah of the Arch of Titus, along with other images invoking the famous relief in Rome, began to appear on Jewish book covers, monuments, and religious art, following the founding of the State of Israel. What was once a symbol of derision has now become a symbol of national pride!

Rabbi Shimshon HaKohen Nadel lives and teaches in Jerusalem, where he serves as Mara D’atra of Har Nof’s Kehilat Zichron Yosef and Rosh Kollel of the Sinai Kollel.